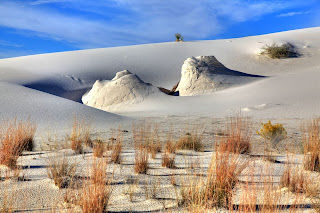 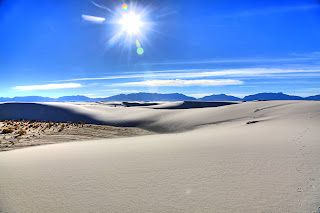 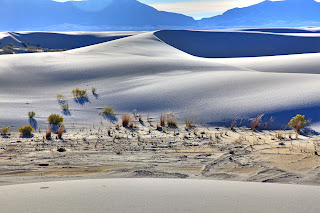 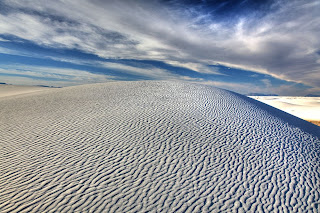 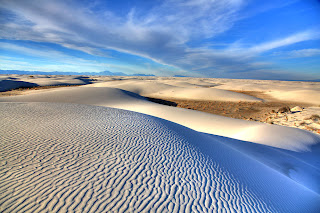 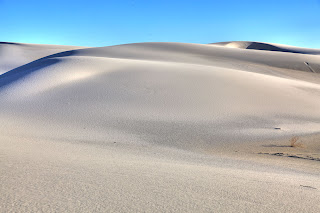 We’ve had a mostly sunny day for a change and the temperature has climbed considerably as we descended in elevation. In fact, it is still 17C at 9:30. We are at about 4400 feet. We got on the road around 10 AM heading east from . We passed through , Carrizozo and Tularosa getting to where we arrived just before 2 PM after 264 kms (165 miles). Some of the roads today were among the smoothest of the trip. We’ve had some very rough roads along the way. The worst are the cracks running across the road that are 3-4 inches wide and deep. The constant banging gets to you after a bit. Mitzy panics every time. We are at Boot Hill RV Park which Rick mentioned in his blog last April. He had been recommended to stay here but he missed the road and ended up elsewhere. Al from the Bayfield Bunch who are from Bayfield, stayed here last November and were pleased with it. It is located just south of Tularosa at about the 72.5 mile marker. Going south, you have to make a left turn off the four lane divided highway so you have to really be paying attention and be prepared. There is a little pass through that lines up with their entrance.

After setting up, I took my cameras off to while Aileen had a long nap. I got some bad news from the gate attendant when she told me the road was closed about four miles in because of flooding. They have no idea when it will reopen. The dunes were just low and brushy where the road ended so I struck off heading toward the mountains looking for higher more open dunes with less footprints. I eventually got beyond most people and into cleaner dunes but it was a long walk. I was fairly pooped when I finally got back to the car after about three hours. My shoulders were complaining from carrying my pack and tripod. It was certainly a worthwhile experience and I can see why my late photo friend Natalie kept telling me I had to visit White Sands! I will have a more leisurely visit tomorrow when I take Aileen to have a look.

Aileen was nearly finished supper when I arrived home at dark, so I dished mine as soon as I washed up. Later I processed some images and will try to get my blog posted. We may stay here another day before wandering westward. We haven’t fully decided on our route yet. We could go out through I-10 to then up to or we could take #70 (I think) up to Globe, AZ then down #60 to . The Globe route is shorter by about 25 miles, I think, but the weather would be cooler since it is much higher. I guess we’ll decide when we get to Lordsburg.

Posted by John and Aileen on the road at 8:46 PM