A series of Crater Lake images 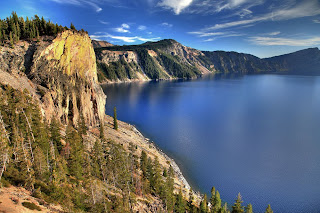 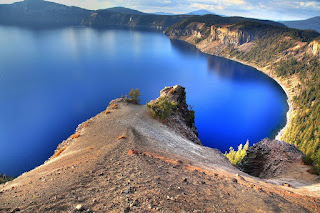 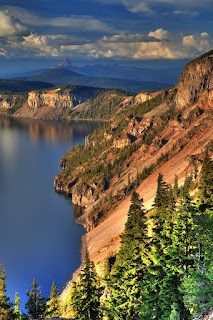 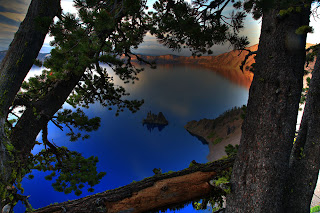 The island called The Phantom Ship from the Sun Notch viewpoint 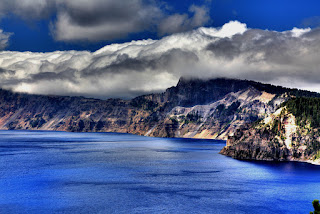 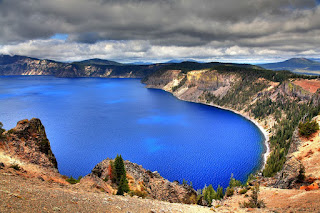 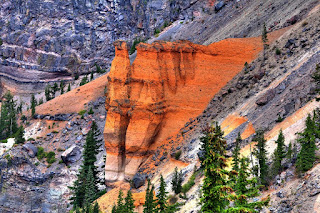 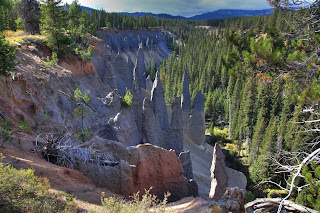 The Pinnacles down a side road. The original entrance to Crater Lake was near here. The Pinnacles were formed by super hot gas rising up and welding the rocks together 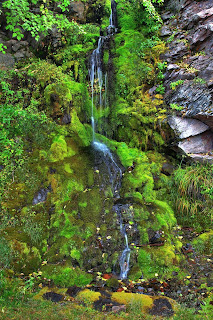 A nice little trickle beside the road 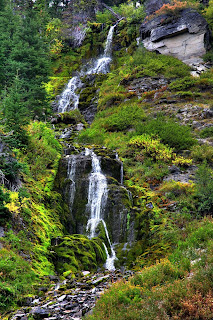 Vidae Falls on the loop road 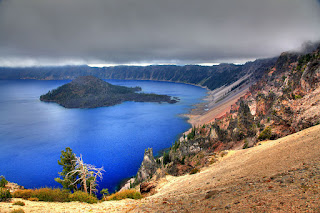 One last look at Crater Lake and Wizard Island

I took Mitzy for a longish walk on a trail adjacent to the RV park before having my breakfast this morning. We then began the packing up process and finally hit the road south mid morning. We stopped at a casino about 20 miles north of for gas - $2.89 per gal. We unhooked at the fairgrounds in and went to Safeway to restock the larder. There was a Petco right next door and I was able to buy a case of the venison and green pea food that both Sophie and Mitzy eat. We had a late lunch when we got back to the motor home then right after hooked up and headed out.

We took #140 east and stopped on Quartz Mtn for a break. An interesting memorial there. It seems in 1945 a local minister and his wife took a Sunday School group of five children there for a picnic. The kids and wife bailed out and started exploring about. The minister, while parking the car some distance away, watched as the group approached something on the ground and when one of the kids reached it there was a huge explosion of which the minister was the only survivor. What they had discovered was a Japanese balloon bomb. Apparently 10,000 were launched with about 3,000 making it to . Most caused no damage and this was the only one to cause human casualties. The landings were kept from the media and the Japanese fearing their mission unsuccessful, abandoned the launches.

We are at another Good Sam Park tonight. This one is near Lakeview in southeastern and is called Juniper Reservoir RV Park. The internet is quite fast but not nearly as fast as at Big Pine. We drove through a round up on the way in and tonight we are being serenaded by a large number of distraught cows. I suspect they separated the calves out today and hopefully the din will lessen as the night progresses. Aileen just stepped out to go use the very nice free showers and there were a large number of deer about 100 feet away. It’s too dark for photos though. This is a very rural park and there are miles of old roads and trails one can access.

My evening was spent processing images from my two trips to and catching up on the blogs I follow. We’re hoping to get to Winnemucca tomorrow.

Posted by John and Aileen on the road at 9:12 PM