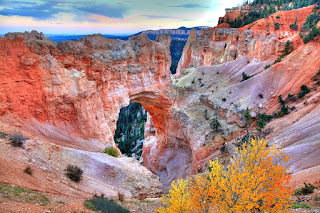 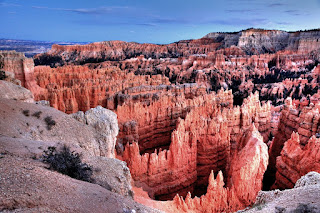 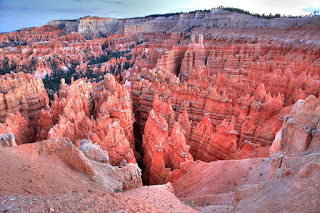 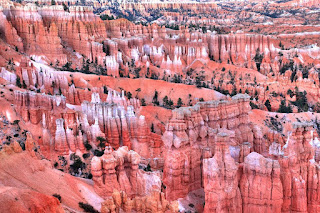 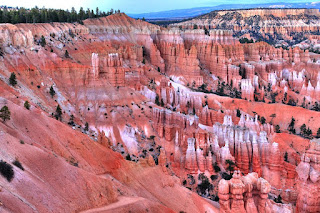 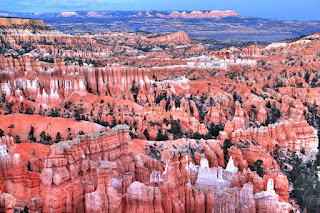 The above are all Bryce Canyon, they were all taken just at dark using a long exposure with the camera on the tripod 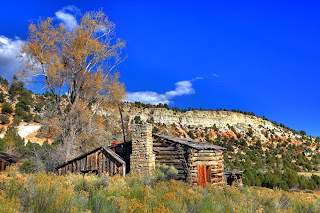 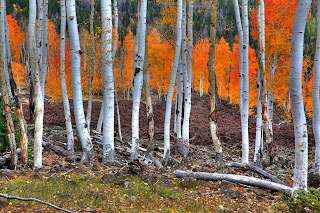 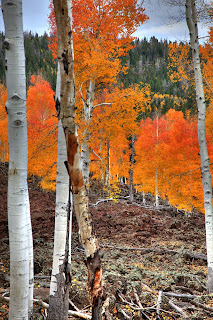 Poplars in the lava 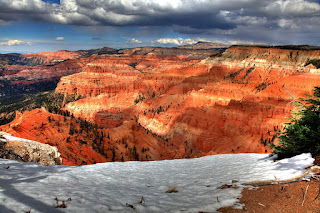 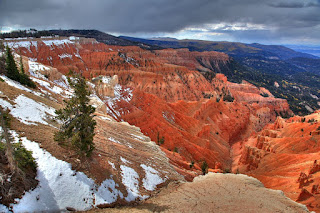 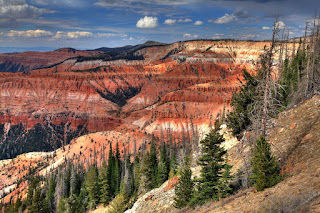 We headed off to Bryce mid afternoon Friday after Aileen had her nap and I had booked us in for another four nights here, getting the weekly rate. Bryce looked much different with the partly overcast weather. I shot just about everything HDR and the sun came out several times just to up the ante. Aileen decided she much prefers Bryce to . She walked to several view points and seemed to enjoy the visit. I took her an extra nine miles just to see the natural bridge and I think that was worth while. We had supper well after 8 PM. Aileen’s friend Bev had called while Aileen was preparing the meal. We decided to have showers so I jumped in first and hardly got started when I ran out of water. I’d checked the gauge and it still showed 1/3 green as well as the red light. I had just asked Aileen minutes earlier to make a note to add water to the tank tomorrow. With the freezing weather, they turn off the water every night.

We had another slow start today. I put a new message on our Telus cell phone giving our AZ cell number. I put some water in the Terra fresh water tank when the water got turned on this morning. I also hooked up the sewer and dumped the gray tank. After making my sandwich and gathering my stuff, I headed off about 10:30.

I stopped just down the road at a group of old buildings for a few shots. I spoke with a lady from who was shooting her way around the southwest in a rental car. Next, I headed for which didn’t live up to its billing. I did find some excellent poplars along the road though, so it was worthwhile. They were in the lava beds and I was happy with a couple of the shots. From there I went to and found it to be fairly similar to but it was just one large amphitheatre rather than several of them. There was 6-8 inches of snow in spots which was several days old so most had melted. The road around the rim at Cedar Breaks is 10,460 feet then climbs a little higher as you get past it. I carried on to where I got gas and a couple grocery items. I was home about 4:30. Aileen made us roasted veggies for supper which were delicious, as usual.

I spent the evening processing images again. Aileen and I played Mexican Train while the processing was happening but I’m not allowed to report the results. I was most impressed with the images I shot at dark last night at Bryce. It was too dark for the camera to auto focus so I was just guessing at it. The colours came through great with the lack of contrast. I found the best combination for success was no sun and no polarizer filter. The sun at high elevation creates far too much contrast for the camera to handle.

It was very sad to read that some fellow bloggers I have been reading for a long time were struck and killed while on their morning walk this morning in . Margie was the writer of the pair and she was always putting out thought provoking comments. They have been full timing since 2008 and during their 22 years of
RVing have traveled to 49 states and much of .

Posted by John and Aileen on the road at 9:48 PM