FIRST TIME INTO NEVADA FOR US 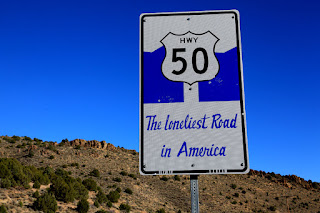 We didn't find it any different the the other Nevada roads we drove. They are nearly all very quiet 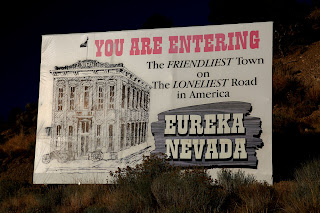 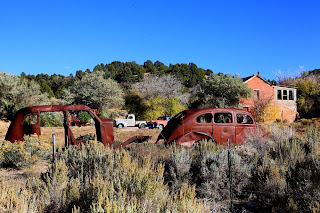 Some old cars next to our Eureka campsite 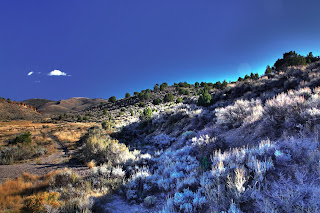 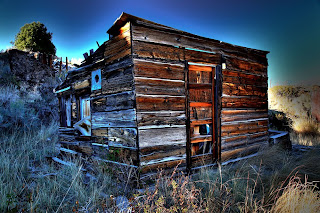 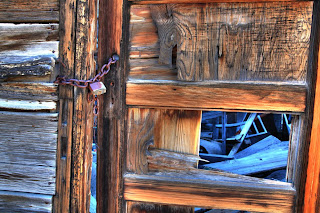 Detail in doorway of cabin above 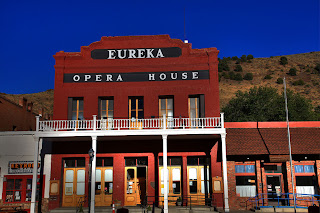 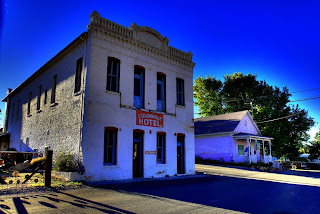 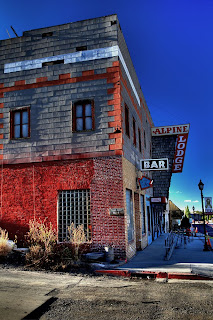 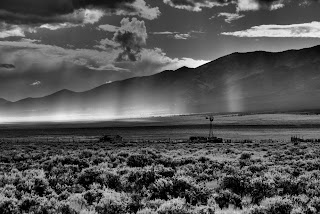 A weird atmospheric scene during the storm today 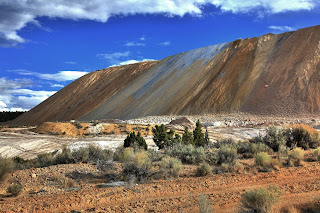 Man made hill and colour at the Ruth Mine near Ely

We were up about 7 Saturday with the pitter patter of rain on the roof. It didn’t amount to much which was good since we had a dirt road to exit the park. We were on the move just before 8:30 and ran into steady rain fairly soon. We didn’t want to feel left out as the family and friends on had a major storm Friday night with another forecast for Saturday night. We had quite a few passes in the 5800 – 6350 foot range but most didn’t involve major climbs since we were already fairly high. There was a lot of narrow twisty road though which didn’t allow much time for sightseeing. We stopped at a rest area about 60 miles north of Winnemucca for lunch and a nap for Aileen and I discovered the Honda again had a dead battery. It would have been nice if the guys at Arbutus had wired the tow set up the way I thought it should have been because then there would have been a wire for keeping the battery charged up. Now I will have to wire something myself. I put the charger on it right away using the inverter.

We continued along the road to Winnemucca after Aileen’s hour long nap and made our way to Hi Desert Good Sam Park only to find them full and not overly friendly. I called the Winnemucca Good Sam Park next door and they still had a couple sites and they are very friendly. Apparently there is a nine month long gas pipeline project happening so the parks are full of workers. I used our little BBQ to cook a couple of tough steaks for supper. Aileen prepared the rest inside. I spent most of the evening researching RV park possibilities and viewpoints for the next few days.

Aileen got rather upset with the TracFone Sunday morning. She tried to call her friend Wendy in Salmon Arm but kept getting an error message. When I went into the manual, I discovered we were supposed to have called in to get it set up for international calling so I proceeded to do just that. It will be two or three days before it is activated. We gassed the Terra up before hooking the CRV on. The tank worked out to 8.06 miles per gallon which is not too bad considering all the hills we had yesterday.

We stopped at a large gravel area just south of Carlin for our lunch. Aileen declined a nap, opting to push on and find spot for the night earlier. We got the second to last site at Silver Sky just past , NV. Aileen went for her nap after I got us setup while I took Mitzy for a walk up the highway since that was what she wanted. She is finding the 20C and 6500 feet a bad combination though so was puffing pretty quickly. I brought her back to the motor home then walked into town by myself. There are some fairly interesting old buildings. The town was started in 1864 and in the 1880’s had 16 smelters, over 100 saloons and over 10,000 people. The boom lasted less than twenty years.

Aileen made stir fry for supper then we pored over the maps trying to roughly plan out the next couple of weeks. It was difficult as we have no internet so we couldn’t check for campgrounds in the different areas. The Trailer Life Directory has a pretty limited number. We both went and had a shower taking turns in the one stall. Aileen went to bed about 7:30. I spent most of my evening downloading and processing today’s images. I had planned to save to the external hard drive but ran out of time. I pulled a book out to read but that didn’t happen either.

We only made it to Ely today as Aileen was needful of a longer break from the road. We went over several passes, some in the mid 7,000 foot range, in the 131 kms we traveled. We are in a KOA park in Ely and the guy who checked me in told me his wife is Canadian and her grand parents live in which is near Bella Coola.

After lunch I wandered off in the car. Found six coke ovens very similar to the ones near A storm rolled through about then and I was in some pretty good blowing sand with a few bits of rain so the car is dirty again. I shot some old buildings we’d passed this morning on the way then went up for a view over the big copper mine. They have made a viewpoint up above giving a great view. They have a gate man who opens a gate when it is safe to cross the main haul road the 240 ton trucks use.

Aileen cooked us some chicken for our Canadian Thanksgiving Supper tonight. It was very tasty. In another five or six weeks, we’ll be able to do it again to help the locals celebrate the American Thanksgiving. That sounds like a good excuse anyway.