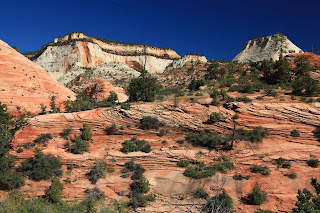 Some of the scenery of eastern Zion Park 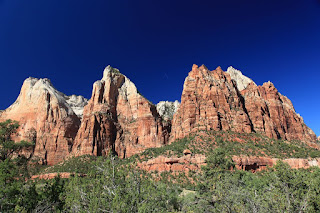 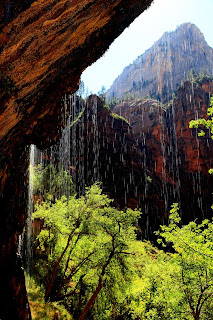 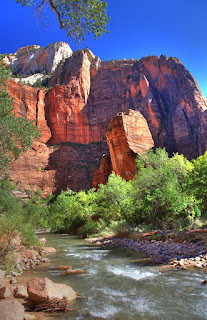 The Virgin River at the end of the road 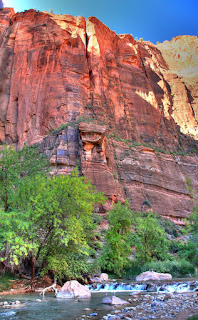 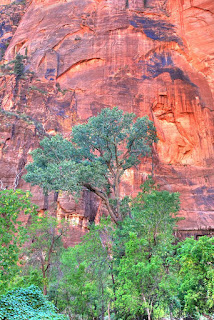 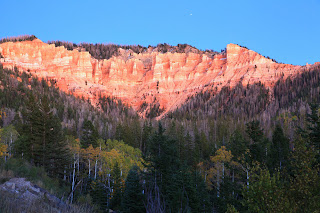 Strawberry Mtn taken at 7:21 pm. It was still glowing while we were in near darkness. 8 second exposure at F8 and ISO 200. That is a star just above the peak

We had a slow start again Thursday morning. My allergies or head cold or whatever was causing my runny eyes and nose and excessive sneezing was dragging me down. I developed lower back pain Wednesday, which I suspect is part of my bug and it was most uncomfortable in exiting and entering the car. My back wasn’t quite as bad Thursday but still was uncomfortable.

We got on the road about 9:30 heading for . We made a stop part way along when I saw some red maples. Mitzy enjoyed a good run on a little flat alongside a creek where the cows had grazed it down like a lawn. We found the scenery when first entering to be awesome but there were not enough spots to pull over for pictures. Usually the few spots were full of other vehicles. There was also the second tunnel (see next paragraph) which Aileen did not like as it was pitch dark and full of fumes, not a good mix for her claustrophobia. There was a lot of construction so we crawled along in low gear riding the brakes for miles which wasn’t good for enjoying the views.

I pulled the following off the internet. The 1.1 mile long Zion National Park Tunnel was blasted and cut in the thick Navajo sandstone during the early 1900's. Imagine cutting through 2,000 feet of sandstone with the machinery available at that time. In those days the whole process was considered a technological wonder. The Zion-Mt. Carmel tunnel was a network of scaffolding set up on the east side of the tunnel, across Pine Creek, which flows below. Blasting was used to enlarge the hole and railcars hauled off the debris. On the tunnel's south side, working on the tunnel was not any easy task because the drop off to the canyon below is 800 ft.

We had lunch at a peaceful picnic table by the wildlife building and had the whole area to ourselves. Amazing, considering how busy the park was. averages over 7,000 people per day all year (over 2,500,000 per year) and was probably the busiest park we have ever been to. After lunch I found a shady spot for Aileen and Mitzy while I took the shuttle bus up in the park. Aileen talked to her friend Marie in then had a nap as she had taken her CPAP machine along. Riding the shuttle was a different experience and while it was nice to not be searching for parking, it was pretty limited in allowing photography. I did get out at four of the six stops and did get some great images. The constraints upon relaxed creativity were just about all I could handle as I prefer to be able to wander and search out my subjects rather than be told “this is where you can stand to take that picture” or you cannot go there to take a picture. Enough whining as I fully understand why a place like has to have these restrictions. As the shuttle driver explained, there used to be several hundred to over a thousand cars on the parkway vying for 80 parking spots (or some number like that). It was certainly worth experiencing and if we were to visit again, at least we will know what to expect.

Rather than subject Aileen to another trip through the tunnel, we went out to I-15 and up to . We found a where we were able to buy some groceries and water. Since it was getting late, we had supper at an Appleby’s Restaurant which prepared us a great meal. This, of course, mandated a drive over the high pass on #14 in the dark to get home. One highlight of the late drive was seeing Strawberry Mtn glowing in the twilight way above us while we were in near darkness. I stopped and took a couple pictures. At ISO 100 F8 my exposure was 8 seconds long. I am going to hit the sack since it is after 10 already. I will download photos tomorrow.

We started today off with the idea of a slow start then Aileen happened to notice that the laundry hours were 8-10 am so she had to get cracking. It was about 8:30 before she got there but was finished just past ten. I did some sorting of maps and brochures and tossed what I didn’t think we needed for future reference. After doing breakfast dishes and taking the garbage, I downloaded yesterday’s images. I processed some for the blog later. My back and sinuses both are much better today and I hope they continue to improve.

Aileen gave Mitzy her much needed bath after she finished the laundry. The plan for today is to head up to after Aileen has her good long afternoon nap. We’ll take a snack and hope to catch some evening light then home for a late supper which won’t take long to prepare as we’ll have leftovers. The clouds appear to be rolling in although rain isn’t forecast until Monday.