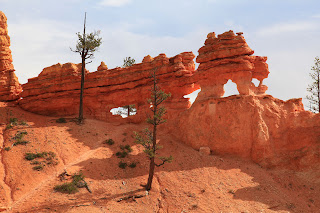 Do you see the turtle pulling a trailer? Or is it a pondering cat? 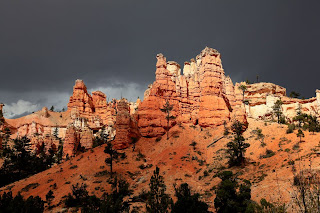 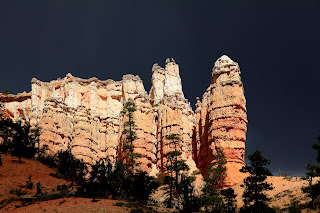 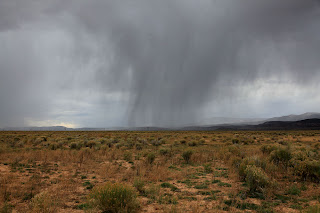 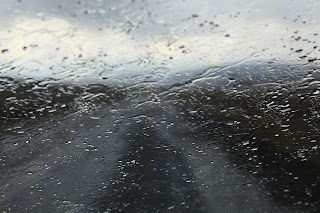 Led to this on the windshield 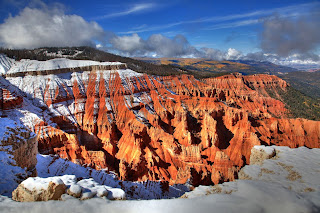 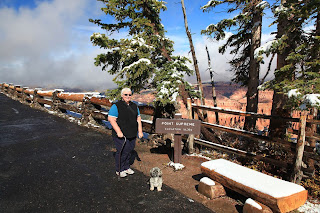 Aileen and Mitzy at the first, and lowest, viewpoint 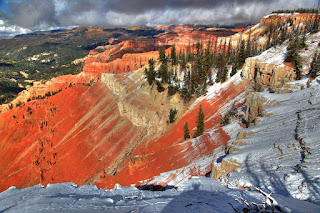 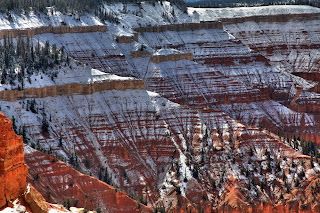 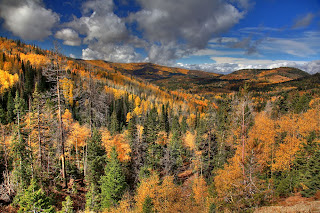 Heading down toward Cedar City 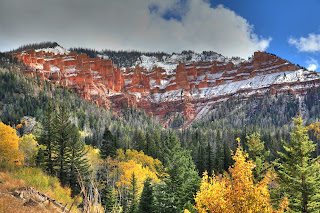 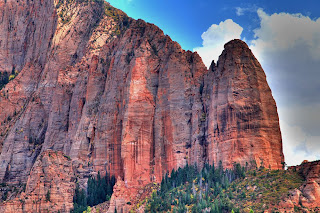 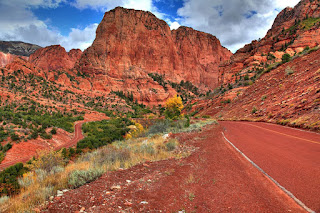 They have made the pavement the same colour as the dirt and rocks. You wouldn't see the difference if there were no lines painted on the road 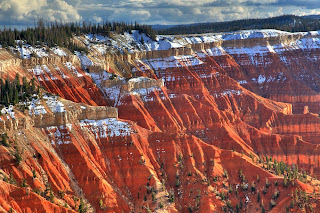 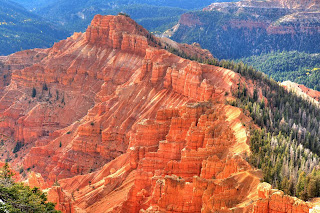 The Chessmen Overlook at Cedar Breaks

I spent much of Sunday morning moving picture folders over to the external hard drive as my laptop memory was full. About 11 we took our lunch and headed off past Bryce. We had lunch in the car at the parking lot then I walked up to see what there was. The cave and waterfall were both nothing to write home about but the scenery there and back certainly was, especially with the thunder clouds for a backdrop. We drove on to Tropic then turned around.

We ran into heavy rain and hail just as we got back up the hill toward Bryce and we had several more showers during the rest of the drive. We went to Antimony, and Panguitch on a big circle route. The temperature bounced all over going from 16C to 7 then back to 16 and finally 13. We put on 224 kms and used 5 gallons of gas.

Tonight I dug out the printer and made new business cards with our new phone number then printed off some diet info from Safeway that Aileen found online. It listed all the gluten free foods they carry. Finally, I did some photo printing. While that was happening, I did some research for where to go from here on Tuesday.

We both slept well last night and had a leisurely start this morning. Along about mid morning we decided to head off to (the northwest section of ). Since there was fresh snow along the road by the Cedar Breaks turnoff, we detoured in for a peek. Gorgeous! There were only a few visitors there today which made it very peaceful. Driving down the road I had to stop several times for pictures making our arrival in rather late. We didn’t pack a lunch today deciding instead to eat out. We went to a health food store for some things and I asked for directions to a salad bar. The recommended Sizzlers turned out to be a great choice. We stopped at WalMart again for a few more groceries and I bought a replacement 5 gallon water jug to replace one of ours that developed a leak. We prefer to buy water from machines for cooking and drinking rather than trusting to whatever we are stuck with.

After lunch we drove the fifteen or so miles down I-15 to . There is a five mile paved road (with red asphalt, the same colour as the soil alongside it) that wanders up the canyon between some mighty fine chunks of rock. This a much less traveled section of and certainly much more peaceful. I would expect the weekends would be much busier probably with many rock climbers, as the cliffs look challenging.

We drove past on I-15 to Parowan and went from there up to Cedar Breaks again. That is quite a climb with one long section of 13% grade. We discovered today that the reason we seemed to have quite a pull out of with the motor home last week was because we climbed over 4,000 feet topping out near 10,000 feet. We were about 10,600 feet today at Cedar Breaks. The snow was melted off the road this afternoon but just above freezing temperature with the snow still lying on the ground in most places. Supper was very late since we had to stop for more pictures at Cedar Breaks. We have quite enjoyed our stay here and it is hard to believe it has been a week already. We think we’ll move down the road to Kanab tomorrow.