Cooling our heels on the Island 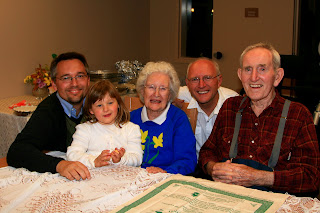 We’re still cooling our heels on the Island. The family meeting went off fairly well and the decision was to rent the parent’s house out for awhile. We did a major cleaning effort and have stored some items in the garage for the short term. Everyone was pretty pooped by the end of the day. One night sister Janet (and John) took Aileen and I out for supper at Deez in Qualicum. We had a great time; thanks guys!
Another day, my brother in law John Randall, guided Aileen and I around the forest trails adjoining the Fanny Bay Nature Preserve. The old guy who owns the property has made trails and created “art and controversy” both on his property and the Preserve. He has cut into mature trees and inserted wooden books into the openings. Open the book and find a quote either from him or some famous person. He has also attached found objects such as water taps to the trees or used them in creating “art” objects. Apparently the Preserve took him to court but lost. These are not the types of things a logger or sawmill would want to see in the line of their work as it could be very dangerous to encounter. Presumably this whole area will never be logged so shouldn’t create any problems in the future.
Robin’s sister Nancy (and husband Brian) stopped in on October 23 on their way to their B&B on Hornby Island. They had Georgia with them and wished to tour our trailer. We had a nice visit before they had to continue on to catch the ferry. On Friday the 24th Aileen and I picked Richard up at the bus depot in Nanaimo. On the Saturday morning we three went to the Buckley Bay ferry dock and met Brian and Nancy to retrieve Georgia from them. Georgia had a tray of Halloween baking that she and Nancy had done. From there we went to Cumberland. After a tour of the town, we had a nice lunch at a new little eatery; didn’t even have a name yet. Following that we visited Perry and Lynda Jessop. Their older son Matthew was Richard’s best friend in Chase and they spent many weekends at each other’s house. Matt joined us on several camping/fishing weekends over the years. We all visited them in the late 80’s in Port Edward, near Prince Rupert. Aileen and I visited them in 2004 just after the moving van departed from moving them into their Cumberland house. Perry’s comment at that time was “how the hell did you find us?” to which Aileen replied – the internet! It was great to see them again and they seemed pleased to see Richard and Georgia.
We had to rush away from the Jessop’s to get back to Parksville for the big birthday party at Stanford Lodge in honour of my Dad’s 86th and John Hargrove’s 61st. We booked the family room and decided they hadn’t counted on our family when they built it. All 7 of my siblings and their spouses were there with some of the grandkids and 3 great grandkids making 38 total. I think if all the grandkids and their spouses had been there the total would have been about 69. We pre-ordered Chinese food and a large cake. The food, cake and ice cream came to $13 for the adults minus Mom and Dad so it was very reasonable. Dad was in pretty good shape luckily. He really enjoys his Chinese food and was very methodical and thorough with opening presents. Sheila used my camera and got a really good 4 generation picture of Mom and Dad, Richard, Georgia and me.
Yesterday, Sunday the 26th, Aileen and I took Richard and Georgia home to Victoria. We drove past Aileen’s Mom’s old house in Parksville which has been renovated and is now for sale. We peeked in the windows and were amazed at the changes. Edna would have been very impressed, I’m sure. We also took Richard to see the bench the family installed overlooking the ocean to honour Edna’s memory. We then stopped by the Lodge to visit my parents again. Georgia left them each one of her Halloween cookies. The parents looked a little tired after the excitement of the party. Richard drove from Nanaimo which was a nice break for me. We had a tour up to the Cowichan River Provincial Park and also into Bamberton Provincial Park. Both campgrounds are not solar friendly as most of the sites are heavily forested. Very welcome shade for summer but not so good for longer term off season boondocking. Robin met us on the outskirts of Victoria at a nice restaurant for supper. Afterwards we transferred all R&G’s stuff and luggage into their van and Aileen and I headed homeward. Aileen drove to Duncan then I drove the rest of the way arriving home before 8:30.
Posted by John and Aileen on the road at 10:40 AM 1 comment: 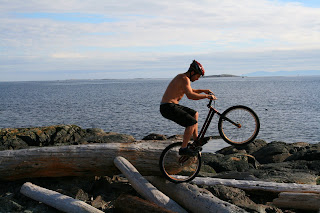 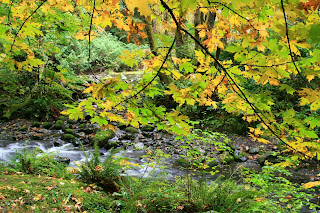 Goldstream Creek in the Rain 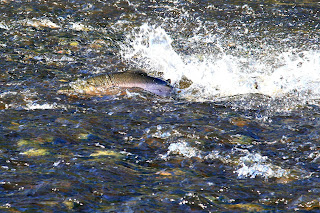 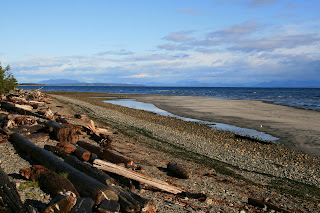 Miracle Beach
We had a good visit in Port McNeill with John & Anne and Dennis & April (and kids Nikki and Travyn). On Saturday night Anne made her famous crab and smoked salmon fettuccini; amazingly delicious! We’d driven up to Port Hardy in the morning to buy the fresh crabs and smoked salmon from the shop that does the smoking. Decided to eat out at a little restaurant there called Malone’s and it was smorg only on Saturdays. Very nice selection. It’s a sad state when I can’t manage more than one plate though.
We left McNeill Monday morning. The road was dry til south of Woss then drizzly. As we started down toward Menzies Bay, the skies opened up and the wind blew. South of Campbell River the weather made driving a bit of a challenge for a little way. We went into Miracle Beach for the night. We were able to get #23 which is the driest and brightest site when there are only the two rows open. Aileen’s sister Pat and hubby Jim joined us for supper and a good visit in the trailer. We were serenaded with falling cones and the odd branch in the windstorm. Nothing serious at the trailer but there were a few trees and large branches down in the campground when we went for a long walk next morning. It was a pleasant sunny walk. We watched some Coho salmon struggling through the shallows up Black Creek in the park.
We spent Tuesday and Wednesday nights in Mom and Dad’s yard in Errington. Visited Mom and Dad in Stanford Place. They were feeling a little poorly, in fact, they were sleeping at 11 AM when we went in. They’d had a busy weekend. Mom’s sister Eleanor and husband Ron Pengelly had come down from Salmon Arm specially to see them. I think they had been in three days to visit. Dad had been very alert the day before we went in so needed a rest, I guess.
We packed up in the pouring rain this morning and moved down to Riverside RV Park along the Cowichan River at Duncan. We got set up before having a late lunch since it wasn’t raining. We went for the full hookup to fully recharge before spending the next several days unplugged in Goldstream Park near Victoria. It was only $22 for full hookup here but cash only.
You can supersize the pictures by clicking on them, use the back arrow to return to the post. If you'd like to comment on anything or just put your two bits worth in, just click on the comments at the bottom of the post and follow the directions. Be warned that others will have the opportunity to read your comments. If there is a number in front of the comments, ie. 1 comments, that means someone has added one.

Posted by John and Aileen on the road at 3:07 PM 5 comments: 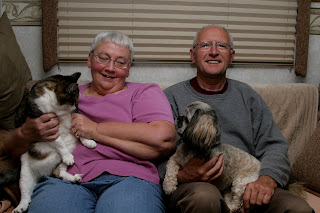 Posted by John and Aileen on the road at 2:28 PM No comments:

Made it to Port McNeill

On Wednesday we had a leisurely start to our day then had sister Wendy (and Randy) stop by to visit. They brought some delicious tomatoes for us. When they departed Aileen and I visited my parents at Stanford Place in Parksville, their new home. Dad was quite bright and was mostly able to join in our conversation. Mom seems happier now and except for some yearning to return to their house (which is really impossible) was in good humour. She is fairly confused and forgetful. She has made a good friend across the hall. Florence is 97 and she and Mom are together much of the time. Apparently Mom does lots of weeding in the central courtyard but her request for a long handled hoe was turned down.
After lunch we hooked up the trailer and made it all the way to Miracle Beach (about an hour’s drive) where we are staying the night. Aileen was tired so she had a 2 hour nap then we cooked buffalo burgers over a campfire. We went for a long walk around the perimeter of the campground before dark then early to bed.
This morning we woke late and lazed around the trailer as it was raining well. We hadn’t unhooked yesterday so just put the jacks up and carried on this morning. We visited Aileen’s cousin Gloria and hubby Bill Van Bergen at Willow Point for a couple hours. I’d taken shots of their 50th anniversary party back in the summer when we made a quick trip down to attend it. Today I printed them a few pictures on my big printer which is traveling with us. I think Gloria was pleased.
We left Gloria’s and made our way up to Port McNeill this afternoon driving through some very heavy rain. We had planned to sneak into Port McNeill so Aileen could have an early night but apparently, eagle eyed niece-in-law April spotted us and phoned Aileen’s sister Anne and said she’d seen an Arctic Fox trailer which must be us. So, a few minutes later Anne phoned to check. She and Aileen both agreed they were tired so put off visiting tonight. We are invited there for supper tomorrow night so can visit then. Amazingly, no rain since we set up tonight so far, although the forecast looks ugly. We decided to stay in the regional district park on the edge of town and have hook ups since heavy rain would make it tight for the solar panels to maintain the batteries.
Posted by John and Aileen on the road at 9:07 PM 1 comment: