WHERE HAS THE SUN GONE?

This has sure turned into a wet Spring.  Nothing like Eastern BC and Alberta though.  The forecast keeps promising better weather a few days ahead but we never seem to get there.  We enjoyed the Grandfriend’s Day at Georgia’s school.  After school was over for the day, we and Richard picked up Georgia and went out to Langford where Georgia was having her last play group of the season.  Prior to dropping her and Richard there, we went to Bin4Burgers where we had very excellent hamburgers.  When we went in the door first off, one of the waitresses said hi, your name is Georgia, right?  It seems she worked with Georgia several years ago at Frank Hobbs School.  Another small world moment!
I took Cousin Neil and wife Carol geocaching our last evening at their place.  Neil and I had gone up Mt Prevost after lunch.  I wanted to check it out as there was some discussion about spreading Mom and Dad’s ashes on the mountain.
After returning to Errington and my brother’s yard, I listed our pickup on Kijiji, Craig’s List and Used Nanaimo.  Used Nanaimo was where the most replies came from.   I had quite a number of people interested and managed to eventually sell to the second person for my full asking price.  The buyers wanted to have it inspected by their own mechanic so I drove it up to Campbell River for that.  He gave it a great report.  Aileen and I met the buyers a couple nights later in Courtenay to make the transfer.  We hated to part with the truck but it just didn’t make economic sense to keep it.
I did up the brochures to hand out at Mom’s service.  I used the same template I worked up for my Dad and Sheila’s Dad a couple years ago then had them printed at a local shop.  Sheila and I folded them one evening.  I copied some old pictures of Mom with my camera and cleaned them up in Photoshop Elements.  The next step is to put them together in a slide show to display at the memorial service on the 30th.
This past Thursday Aileen met Heather, the lady we bought the motor home from, in Courtenay for lunch.  They get together once a year or so.  Heather bought a nice apartment with a beautiful view looking over the ocean just south of Campbell River.  Aileen would love to have the view but doesn’t want to be in a strata (homeowner’s assn.) again.


On Friday, we drove down to Mill Bay to meet Richard and get Georgia for the weekend.  On Saturday, we went to a 65th birthday party for my brother Sam put on his kids.  There were several family members from out of town so nice to catch up with them.   We were fortunate to slip through the afternoon and evening without rain actually falling.  It was very threatening though.  We took Georgia for a walk in the rain this morning.  She enjoyed about a quart of salmon berries we found along the way.  She’s like a little bear when it comes to wild berries. 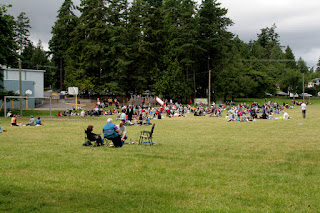 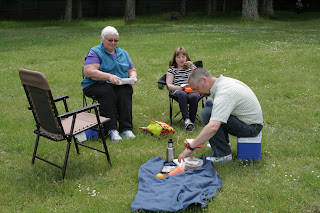 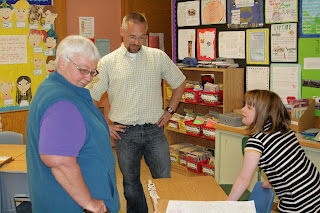 Checking out the classroom 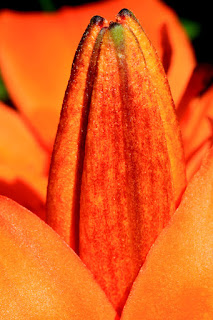 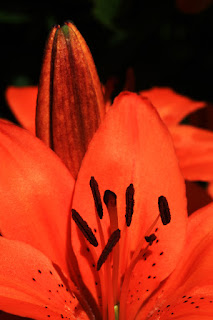 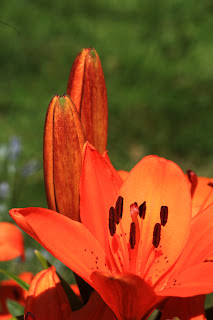 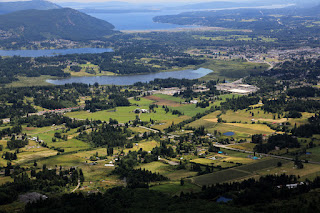 The Cowichan Valley from the top of Mt Prevost.  For those who read Rick and Paulette's blog, found on my sidebar, they live up in the top right of the photo.  That is Cowichan Bay coming in toward the two lakes. 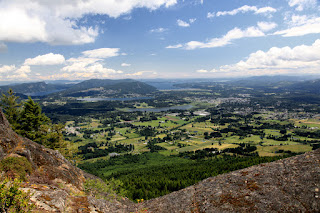 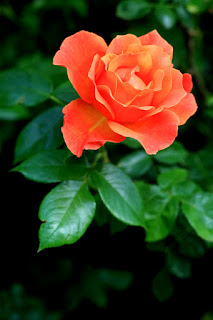 One of the roses outside Charlie and Sheila's dining room

AND THEN WE MOVED DOWN THE ROAD

After a busy three days in Campbell River, we moved down to Duncan and are moochdocking at my Cousin Neil’s.  He and Carol are great to get along with so we enjoy being able to visit with them.  Aileen went out checking garage sales with Neil and Carol Saturday morning.  We had supper with Neil and Carol Saturday night.  Neil went and picked up his Mom, my Aunt Susie, and we had a great visiting time.  After supper, we sat around a campfire until about eleven pm.
I have been schooling Carol in the fine art of geocaching and we plan to go find a few Thursday after supper.  I went out with her hiking group to Stocking Creek Park on Sunday morning.  I’ve been having a good time caching in the area, mostly along the Cowichan Valley Multiuse Trail.  Being an old railway grade, it is great for cycling.
Yesterday we went down to Victoria for the day.  We had lunch with son Richard then left Mitzy with him while we picked up friend Bev D and went on a whale watching boat ride.  It was a pretty ride but pretty scant on whales.  We did see little bits of whales when they surfaced for air or were lunge feeding but the sightings were so brief, you didn’t have time to focus on them let alone find them in the camera view finder.


Tomorrow we are off to Victoria again to attend Grandfriends day at Georgia’s school. 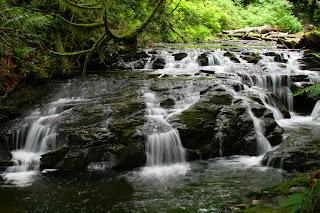 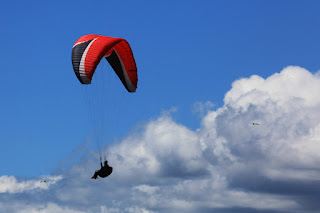 Para gliders on the Victoria waterfront 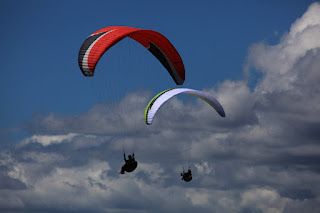 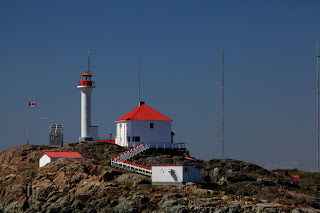 A lighthouse we passed on the whale watching trip 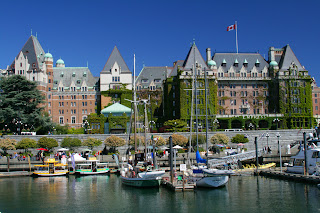 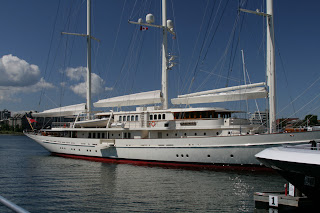 The Athena is the world's largest private schooner sailboat.  Rumour has that it is for sale for $95 million dollars!  It is over 290 feet long and over 40 feet wide.

WE ACTUALLY MOVED ON UP THE ROAD

It’s time for another update on what’s been happening in our world.   We’ve been in Campbell River parked in Cousin Bill’s drive moochdocking for the past couple days.  It was time to get on with our life again now that Mom has passed.  My sister Susan, who is Mom’s executrix, and I went to the funeral home and made the arrangements for a celebration of Mom’s life which will take place June 30.  I put some time and effort into making a brochure to give people at the service.  I lined up a printer at a reasonable cost who will cut the sheets for us as well so all we have to do is fold them.  I don’t envy Susan with all she will have to do to settle the estate and am just glad it isn’t me.  Last Thursday, I helped two of my sisters and a brother in law clean out Mom’s room at the care facility.  For a small room, there was a lot of “stuff” to remove.  Hopefully some of the grandchildren will adopt some of it then the rest will go to the thrift store.  I plan to put together a photographic remembrance highlighting Mom’s life when we return to Errington in another week or so.
I have been out caching both on foot and on my bike the past few days.  I continue to be amazed at all the trails that are out there that most people wouldn’t know existed.  It just reinforces how much more a group can accomplish rather than one person.   I’ve been wearing shorts and a tee shirt and many of these caches are off the trail in thick brush so my legs and arms have been getting brutalized.   I have found several areas that I hope to return to next time.  They are fairly level roads suitable for riding my bike to cover more ground but are behind locked gates to prevent motorized travel.
Aileen’s sister Anne came down from Port McNeill for last weekend and she and Aileen had a great visit.  I spent most of both days helping again on the wheelchair ramp addition to the Errington Communtiy Hall.  We had good volunteer crews both days and got lots accomplished.  That was probably my last effort there as we plan to be away the next couple weekends.  I enjoyed helping and learning some new skills.  The ladies and I did get out caching/walking on Saturday evening so Anne was able to claim some caches for her and John.


We’re having trouble getting much decent weather.  We were forecast to have about ten days of decent sun but we had some heavy rain Tuesday night and now it is raining this evening, Thursday.  It looks like we may be getting showers tomorrow, which is moving day down to Duncan where we will moochdock at my Cousin Neil’s.   We already have trips planned to Victoria next Monday and Wednesday.  If the weather will cooperate, I plan to ride some of the Trans Canada Trail in the Duncan area to do some geocaching.  Are we getting bored with retirement?  Not a chance!  Some days I don’t even get to read a book. 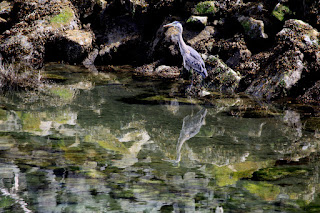 A Great Blue Heron down at the marina today 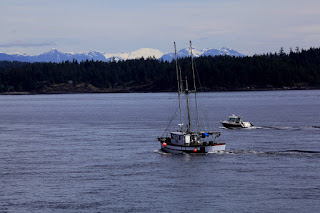 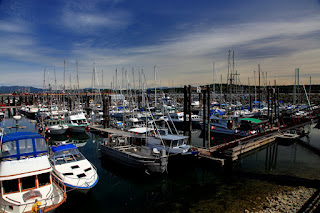 Part of the Campbell River Marina 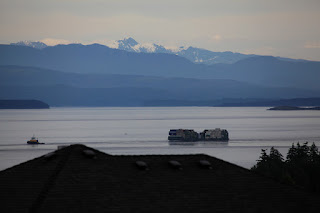 When I got back to the car after geocaching late this afternoon, I saw this large barge of containers heading for Alaska.  That's why they call this the highway on the sea. 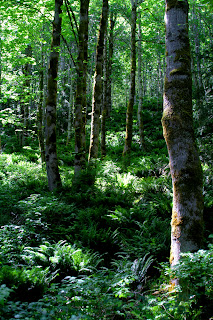 Some of the forest I was geocaching past yesterday 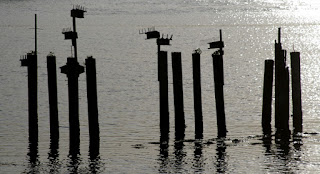 Pilings left over from a long ago logging operation now provide protected nesting for some birds.  Note the efforts at preventing larger birds from roosting and frightening away the smaller birds. 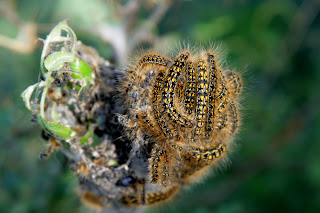 A little colony of tent caterpillars 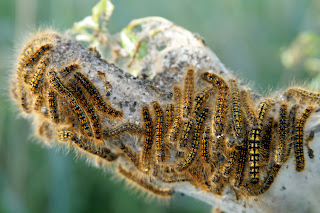 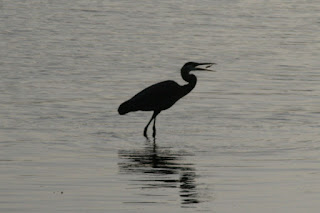 The Heron got his minnow

Posted by John and Aileen on the road at 9:26 PM No comments: