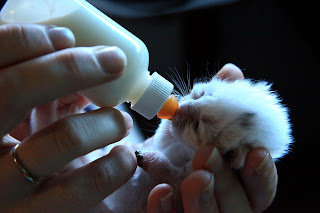 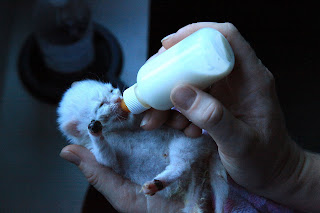 Frosty is a kitten our daughter is fostering part time for the SPCA. It fell out of the cage and the black paws are frost bite like symptoms from lack of circulation. The black eventually falls off leaving fresh pink but some will be just a pad, no toes 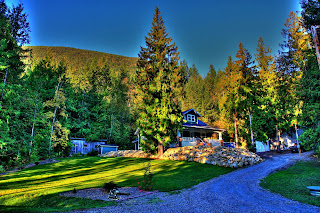 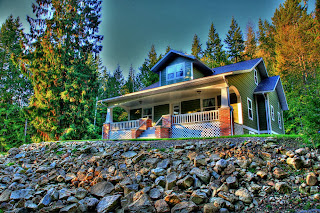 The house Jacquie and Jim have sold 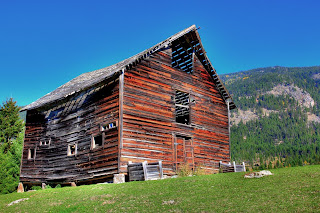 An old barn in Turtle Valley 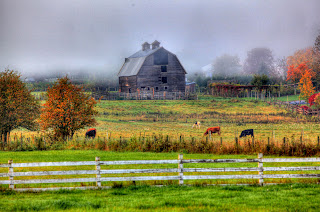 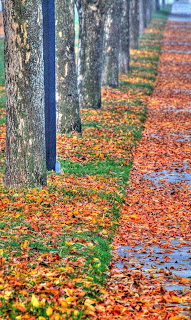 Trees beside where we were parked 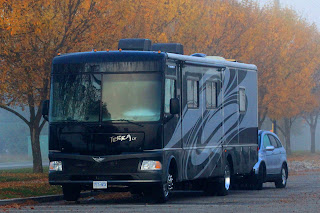 RVing in the mall

A leisurely start again on Monday morning but then we had to get in gear. After Aileen gave me a haircut in the Terra, (it was too cold outside for me) we headed off to town. I went to HUB insurance and got the truck and trailer insurances done. I also got our health insurance which cost $755 each for 156 days. Our sleep apnea cost us about $68 each. After a couple other errands and appointments Aileen enjoyed her lunch with her friend Edna. I went to A&W for mine then went to Windmill Meats intending to get Mitzy a slice of roast beef for her lunch. The only other customer had the slicer tied up so when my server asked what I was doing, I told her how I was just getting it for my dog so she just reached under the counter and gave me a meat loaf heel and said be gone. Jacquie and Jim went with us to Pengelly’s for supper Monday night. We had to take the truck as the CRV had the scooter tying up the back and they had the seats down in the rear of the Suzuki. Supper was very good. All but Ron played a few hands of Mexican Train which was ably won by (surpize!) Jacquie while I had the highest (losing) score with Aileen not too far behind me. Jim and Eleanor were pretty close together in the middle.

On Tuesday morning we woke about 6 when our built in alarms went off as we knew we had an early trip to town. I think we were on the road about 8 am and dumped the tanks at Piccadilly first. Dropped the motor home at the RV lot then carried on with errands etc. We went to PJs for lunch as I was starved and had the salad bar while Aileen ordered a taco salad with out the shell. Then we finally got at the laundry which needed doing. I walked Mitzy then went to the mall and library while Aileen tended the laundry. Finally we just went back to Tri Crown and waited. It turned out they were still a couple hours away from completion so we took the Terra home, to return it again the next day.

We both woke about 6:30 and got up and at em. Headed for town before 8 and dropped the Terra at TriCrown then Aileen brought me back out to J&J’s to help with the moving. They had Jim’s truck nearly loaded already then we loaded mine and Jacquie’s. We took three big loads with Jim’s, two with Jacquie’s and two with mine then I took Jim’s ATV on the third load. We were done by 2:15. Jim took Rick, Mel and me to lunch at the Goldpanner.

Aileen had a good visit with her friend Wendy then had lunch and a nap in the Terra as they had completed the work. She came out and picked me up mid afternoon then we stopped at the storage to drop off some filing. Picked up the Terra and paid the bill. Aileen did her interview with Madonna from the and then I did one at 4 PM for about ½ hour. This was a ten year follow up to an in depth genetic study Aileen participated in for MS. We came back to J’s and I immediately washed the whole motor home which took about 1 ½ hours, so supper was late. It’s a good thing I did it tonight as we have to be moving on in the morning as J’s are moving out before lunch. They did their final cleaning in the house tonight.

Thursday was a more laid back day for us. We moved the Terra into Piccadilly Place Mall after breakfast then Aileen drove me back out for the truck. She came to town and spent much of the day around the motor home. She met ex neighbour Marion A and little dog. They have moved out of Lakeview Terrace also and are in Piccadilly Terrace glad to be out of the strata. She also saw her friend Donna B in the parking lot and she came and visited at the motor home outside as she can’t do stairs. This afternoon Aileen got to visit with friends Fiona and Val.

I went to the Scales (my last employment) for a visit. On the way, I had a call from Terry G who worked in my department and who I had advised on his Canon Elan purchase years ago. The camera has broken the rewind mechanism and he was looking for guidance on repairing it. Terry H was at the Scales so I sat and visited there awhile and got to see some of my old truck driver friends. I visited with Rob R at the Dump. He is still driving the Outback he bought from us three years ago. I was disappointed to see there have been no upgrades to either the Scale Shack or the Log Dump. Everything I hear about makes me so happy to have moved on. Perhaps it wouldn’t be so bad if I had been there while things slowly evolved. I certainly don’t feel any attachment to the place.

I drove home via where we lived for 16 years and took a few pictures. I’m thinking the fall colours are 2-3 weeks early this year. Usually there isn’t much in the way of colour until late October but it’s happening now. I had a cheap burger at Wendy’s about 2:30 then washed the truck. I came back to the Terra and Aileen was up so chatted awhile then took the CRV for a wash. Bev came and bought supper makings at Save On and we had pita pizzas and salad. Later we took the truck to her house and I left her the keys and we got to say good bye to Kevin.

It was quite foggy around Piccadilly Friday morning so I took a few pictures after walking Mitzy. I think we pulled out about 8:30 then stopped for gas in Enderby – 98.9 at the Indian station. I filled the propane also - $13.48 which is about 3-4 weeks use. I put in $187 gas and the tank was at ½ to start with. Next stop was at Westside for a quick break then on to the window manufacturer in Summerland. He took a rough measurement but said I needed to pop the window out and send him an accurate measurement including the wall thickness. Hopefully Jim will help with that down south. We had our lunch right there. We had to unhook to turn so Aileen just drove the rest of the distance to .

We found Bev and Carole’s apartment then they took us the few blocks to their friend’s the George and Kathy’s where we were to park. I had to do a fair bit of trimming and it was still tight backing in. The voice camera really worked well for that with Aileen walking along behind me. I did have to get up on the roof for some dead Hemlock branches. We are set up on the lawn and it didn’t take much to get level.

Carole surprised everyone including her partner Bev by buying new 2010 red Hyundai Accent two door today so we had to have a peek when she brought it by. She and Bev had a Terra tour after. I took Mitzy for her afternoon stroll. Carole and Bev took us for supper at Theo’s.

Our son Richard turned 40 on October 1. Hard to imagine! Aileen chatted with him the night before and caught up on news.

Aileen awoke violently ill at 2:28 AM and spent much of the night in the bathroom. She rarely has problems like this so we don’t know if it had anything to do with supper or if she picked up a bug somewhere. She stayed in bed while I went to the Okanagan Mainline Photographic Council meeting. Only two of the possible seven clubs attended so not much was accomplished. We plan to educate the various clubs over the Winter on the benefits of participating in OMPC events. We will call another meeting for March or April and attempt to organize an outing or event for later in the Spring. Campout events are always lots of fun. It was good to see my friends Ian and Wendy from the Shuswap Photo Arts Club and John and Carole from the Summerland Camera Club. We did have a nice potluck lunch and some great visiting.