THE PAINTED HILLS AND CRATER LAKE 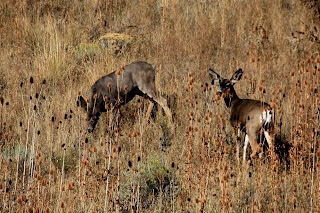 A couple of the deer near Hardman 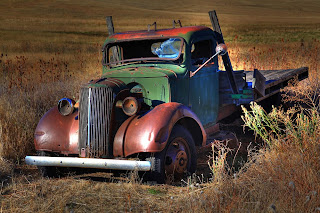 In a Hardman yard, there were lots of old trucks in town 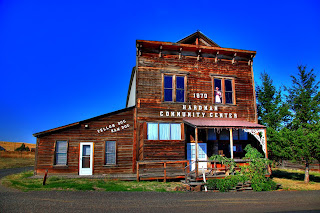 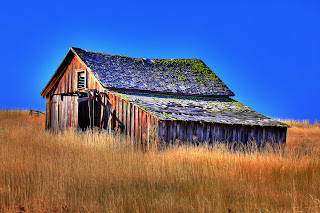 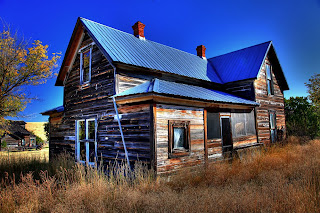 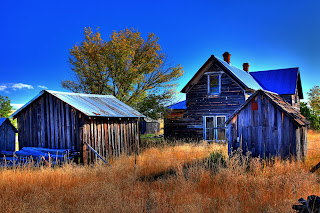 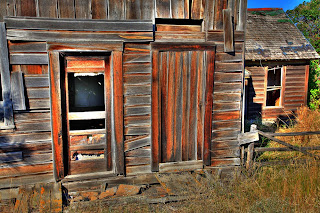 The above were all taken in Hardman, Oregon 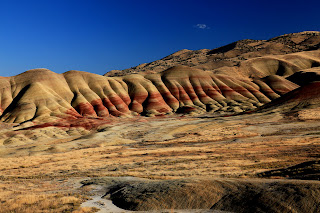 Morning light on the Painted Hills 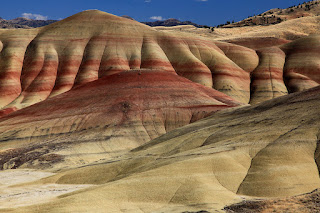 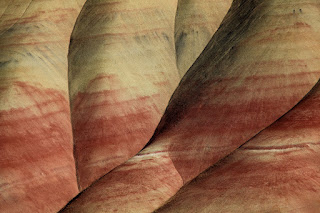 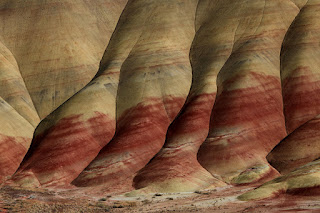 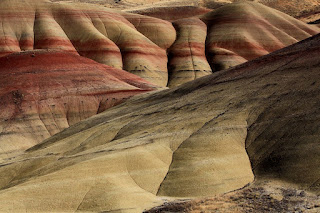 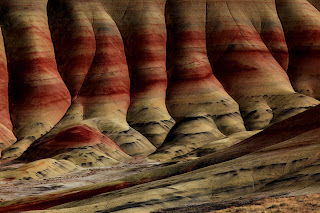 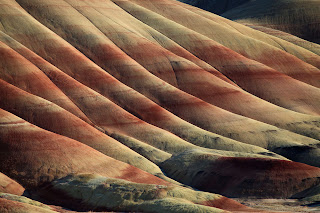 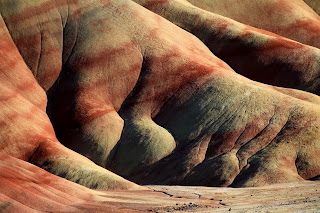 These were all afternoon and late afternoon lighting 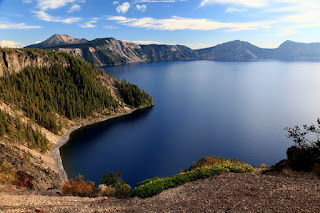 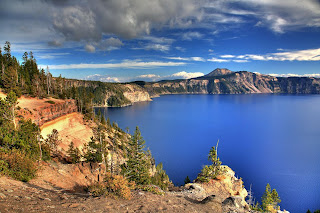 Exiting the driveway Sunday was very easy then we went to the sani dump at the Petro Can near Walmart. It used to be the Esso and I drove around quite a bit this morning in the CRV looking for the Esso which was listed online. The lady told me they changed to Petro Can two years ago. Anyway it worked well and was free. It was about 11 when we finally got on the road headed south.

We were pulled over for the agricultural inspection at the border but he mostly wanted to talk about video games when he spotted our two lap tops. I zipped into Prince’s for a few things for lunch then we stopped just out of Oroville for lunch. We pulled into the Walmart in Omak so Aileen could nap while I shopped. First off I bought a TracPhone and got one with double minutes. I managed to set it up using their phone at customer service. If we wait two business days we can call free and we can also apply for a Canadian number so it is pretty much free for Canadians to call us. Sounds like a deal! The phone was $9.88 and included a free coupon at that. I bought 200 minutes which doubled to 400 minutes so 460 minutes and 150 days with the bonus. I got all this for less than $60 including the phone. Telus, are you listening??? For $100 I can put on a one year card with 800 minutes so we continue with the same number next year with no hassles.

I got some groceries then after bringing them out to the Terra, I took the broken door blind over to Home Depot. For $7.47, they cut a 37 inch wide roller blind down to the 26 or so inch wide that I needed. Another deal. I took Mitzy for a good walk around before supper. After supper Aileen and I went back to Walmart and bought a blood pressure monitor since we couldn’t find ours in storage. I bought a pair of lined Croc type slip on shoes for driving. We got three cans of different cat food to try and some ear plugs which would be needed here for the traffic noise. I walked over to Safeway later for a couple items I couldn’t find in Walmart. It is very difficult to find strawberry jam that doesn’t have high fructose corn syrup in it.

We both used ear plugs and slept surprisingly well. We woke about 6 Monday morning and after our normal routine, were on the road by 8:10. We followed the Good Sam routing which took us onto #17 past Chief Joseph Dam and where we stopped for a break. We stopped for lunch early at a wide spot about halfway between and #395 junction. Aileen had nearly an hour nap then said she was ready to go. I processed three HDR pictures and dozed in between. We stopped for gas at Hermiston and put in 55.018 gallons. Aileen had selected Anson Wright campground which turned out to be further than comfortable so she was pretty tired by the time we arrived. When we went to unhook the CRV its battery was dead. Fortunately, I was able to join two cords together and put the charger on the battery. Three hours later at 10 amps and it claims to be charged. After reading through the manual for the Even Brake, there seems to be a couple things I can do to minimize the brake usage which I will try tomorrow. I pulled out a couple bungee cords which I attached to prevent the dinette drawers from sliding out as we’ve been surprised a couple times on some twisty roads. Maybe we’ll get things in order yet.

Anson Wright turned out to be a super quiet campground. I only heard a couple of vehicles all evening. Not a sound out of the other campers of which there are about eight. Most of them are hunters and their wives.

It was quite cool overnight. It was -2.4 C at 7:30 AM Tuesday morning but did warm up when the sun made its appearance. I left Aileen to rest and went back to Hardman where I shot many old buildings. By the time I’d walked most of the town, two hours had passed. I saw five big does when I was coming up out of the canyon toward town and they weren’t concerned when I stopped for pictures.

I adjusted the brake system to minimum levels and hooked up the motor home monitor. I took it pretty easy on braking Tuesday even though we had some pretty long hills. I used tow haul or down shifted and I didn’t notice the car brakes activate at all. We had lunch alongside the highway in Spray then carried on to the Painted Hills. The lighting was pretty good the whole time and I shot HDR for most images. However, in processing, I found it to be too much and the best results are just increasing the levels then sharpening the images taken at the correct exposure. I prepared several for the blog. I left Aileen in the Terra at the viewpoint and wandered around on foot then with the CRV. I found a nice boondocking spot five kms (three miles) up past the Painted Hills viewpoint so we moved up there before supper. It is very quiet! Just outside the park boundary there were two class A motor homes and a camper set up and we’re over half a mile past them.

We had a leisurely start Wednesday morning. Mitzy and I wandered around a bit then we puttered a bit. Aileen drove out to the highway. I took a few pictures out the window as I drove the Terra out. We parked the Terra at the highway and took the CRV into Mitchell for a look see as Aileen hadn’t been there before. We had lunch along the highway after Prineville. We are at Big Pine Good Sam Park at Crescent, where I booked us in for two nights.

The weather didn’t look promising for Thursday so I decided to whip over to Wednesday afternoon. It turned out to be a long drive, over 220 kms return. I drove and shot like Harold Smiley and it was still over 4 hours round trip getting home at 8 pm. I had some good light but mostly not. Some spots were pretty impressive and worth another visit. I stopped for a great sunset and after finishing that decided to take a peek over toward the lake. Well somehow I managed to trip over a log and landed flat out on my face. My camera got flung way in front of me attached to the tripod. I can’t see any visible damage but will have to see how it performs next time. Today’s images seemed fine.

I spent the rest of my evening downloading images then catching up on blogs. Finally, a late shower, take Mitzy out then disconnect the water hose in case it freezes.

Today is our 43rd anniversary and we celebrated it by spending the day at . I started the day off with some frustrating events with TracFone. They advertise that one can get a Canadian number that family and friends can call which connects directly to our phone when in the and doesn’t cost long distance for them. After a long while talking to two reps, the last guy told me the only available number was in . I finally sent off an email trying a different tact.

We took our lunch with us and it was pretty darn cool at the view point we chose. It was 6C and very windy so we were out there in our winter coats, Aileen with her hood up and me with my ear muffs. Great scenery though and I kept snapping pictures as the light changed. We had lots of cloud but some sunny spells and near the end, one spot was fogged in and only 4C. We went down to the Pinnacles and on the way out Aileen spotted some elk. I saw a cow and calf but she saw several others. We were thinking the only mammals were squirrels and chipmunks.

Our anniversary supper consisted of leftover rice pasta and veggies and tonight Aileen is at the laundry since we are moving on in the morning and no idea where we will find the next good facilities. We do need to find a big grocery store tomorrow before getting beyond a big town. We plan to go to then head east and south east through .

Posted by John and Aileen on the road at 7:11 PM