SETTLED IN AND FIRST ATV RIDE

Yesterday was a busy day for us.  We went grocery shopping in the morning and worked at settling in and cleaning most of the rest of the day.  Got the laundry caught up as well.   In the afternoon, 83 year old Blue came by to see if I’d like to go ATVing today.  At that point, I hadn’t even managed to get my ATV running.  It didn’t want to pick up the gas or something.  Eventually, I did get it running so took it for air in the tires and gas in the tank.
I led the group of six (Blue’s Bunch) on a ride today.  It was a beautiful ride all morning.  Most of us got down to tee shirts and the air was clear except for the ATV dust for those following.  I love it when they choose me to lead.  Since I got to mostly select the route, we went by a roundabout way to Box Canyon which is one of my favourite locations to ride.  As I was able to set the pace, I rode slowly through the canyon stopping to look for the sheep which are sometimes grazing on the canyon walls and slopes.  I almost missed them but happened to look at the right time and spotted them.  My second time to see them in four years of riding there.  They’ve likely been there more often but we’re usually going much faster through the canyon when riding with the main group.
It started to warm up by lunchtime but we had a fire anyway since Blue had brought a hot dog for his lunch.  It was 30C when I got home and I imagine every bit as warm out in the desert. 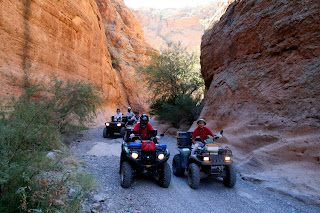 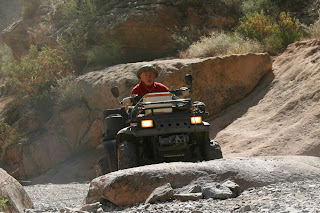 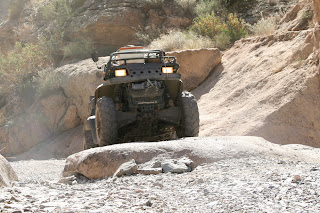 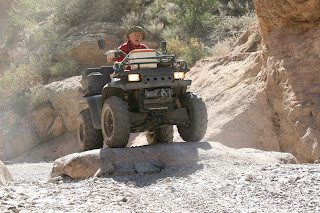 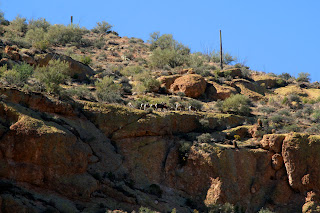 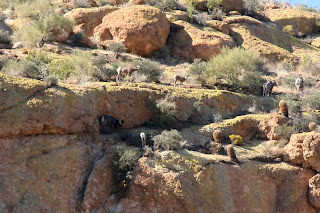 Can you spot the big ram on the ledge? 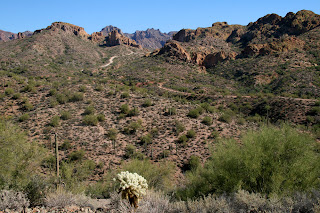 An overview of some of the beautiful area we ride in. 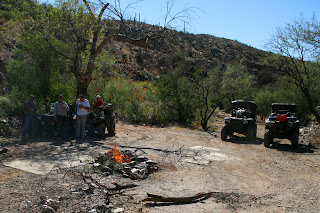 For some reason the boys are reluctant to get too close to the fire.  30C, 90F? 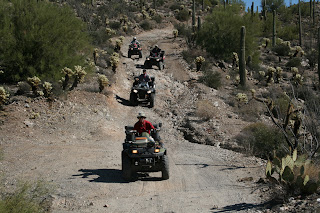 Posted by John and Aileen on the road at 4:25 PM