LAST DAY BEFORE CROSSING INTO THE US 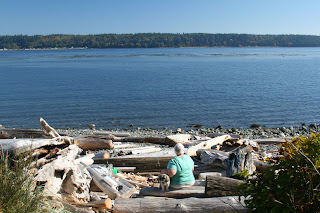 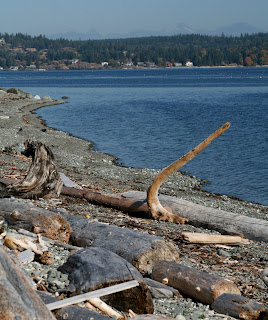 Looking up the beach from our picnic, Quadra Island in the background

The long drought on Vancouver Island has ended.  We had lots of rain overnight and more forecast through the day.   The generator is getting lots of use keeping our batteries charged.  The cat and dog are having difficulty changing over to no electric heater.  They had taken to lying in front of it.  The first night without power, Aileen put the laundry basket where the heater sat.  When she looked out in the middle of the night, Mitzy and Sophie were both curled up in front of the laundry basket!
Bev D called about 8 yesterday to say she had a sore throat so would not be available to visit which changed our plans for the day.  When Richard mentioned a meeting at work he'd like to attend, Aileen offered to pick up Georgia at school.
As we were still looking to buy some cheap books for our travels, Aileen found a few thrift stores online so we headed out looking for one.  We ended up at two in Langford and got a large bag of books for $23.  One book Aileen found was one that she had planned on ordering online when we got to AZ.   She paid less here.
I went to an RBC for some cash out then wandered in London Drugs after taking Mitzy for a walk while Aileen checked Celiac Scene.com for lunch.  She came up with the Old British Fish and Chips café on Pandora.  The complete menu is gluten free.  She had a piece of cod, two oysters and two prawns with lots of chips.   I had two pieces of cod with Caesar salad.  We shared the chips and salad.  Everything tasted really good.   Just as we stated to drive away, I noticed a gluten free bakery two doors down so we checked it out.  We had a couple of really good cream puffs and bought white chocolate cream cheese iced carrot muffins for supper dessert.
I wandered around Hillside Mall for a bit before we headed off to find G’s school.  Georgia was pretty surprised to see her Grandma in the hallway.  We went to R&R’s to hang out with G.  I caught up on the computer while Aileen read to G.   Mitzy and I took a big walk up and along Tudor to the end then up Phyllis, I think, then cut through a couple of trails to come out up on top of Arbutus.  We got rained on for nearly the last half.
Richard made us a nice supper of salmon, rice and veggies including his homemade chutney which was very tasty.  The muffins were a real hit for dessert.   We headed for home about 7:30.  It rained all the way.  The parks guy was here within moments to collect so I paid for two more nights.  When he collected the first night, he didn’t even want to verify my gold card for the senior’s rate so I said “look bud, I’ve been waiting years to do this so you need to look at the card”.  He was a good sport about it.  Bev D called just after we got home last night and she is feeling some better but not good enough to go out.
We will be getting together with Richard and Georgia this morning but not sure what we’ll do as it is pretty wet to try outdoor activities.  We’re getting together with Richard, Robin & Georgia for supper again. 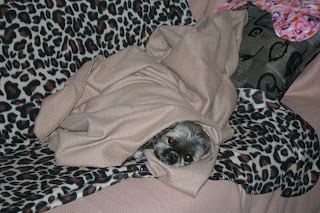 This is Mitzy just a few minutes ago

Posted by John and Aileen on the road at 9:03 AM