Well a little south anyway.  We’re just outside of Victoria at Goldstream Provincial Park and I hope to get my first senior’s half price camping fee.  The rates are reduced for BC residents 65 and over starting the day after Labour Day til sometime in the spring.  It was inevitable, since I did a major cleaning and polishing of the motor home.  After weeks of drought, when it was time to hit the road, the road was wet so now we’re dirty again!  Not quite sure how that happens so frequently.
We had a nice Thanksgiving weekend.  On the Friday evening, we and four of my siblings, their spouses and some offspring gathered to celebrate my sister Susan’s 60th birthday.  There were about 17 attending. Her birthday isn’t until the 12th but she and John left for Australia on the 7th for nearly a month.  They were going to visit their daughter, husband and the newest grandchild, a girl born a few weeks ago.
Our son and granddaughter came up from Victoria Sunday and stayed overnight.  We all went to Sheila’s Mom’s for turkey and ham supper.  About 17 or 18 people sat down to supper.  Since someone noticed it was our 45th anniversary, we received a card and they sang happy anniversary to us.  We went for a walk along some trails near Qualicum on Sunday morning and found a geocache.
After a lunch from the deli counter in a local grocery, Richard and Georgia went off to meet up with his cousin Keith while Aileen and I went to Campbell River to meet her sister Anne and husband John who drove down from Port McNeill.  John and I walked along a forest trail geocaching for the afternoon and the ladies picked us up at the other end about five hours later.  We had a good day logging 28 finds.  We struck out on the last two we tried though.  We enjoyed a late supper at the Royal Coachman Pub.  I had a buffalo burger with a gluten free bun which was excellent and I don’t think it cast extra either. It was so nice we could get together with John and Anne again before heading south.
Aileen and I went back up to Campbell River on Tuesday, the next day, as previously arranged to meet Heather who we bought the motor home from two years ago.  We had a nice visit with her then took our picnic lunch up the road where we could sit at the ocean shore.  Later, we went back to the two geocaches John and I missed the day before but we still didn’t find them.  I did find another as soon as I tried it though.
Yesterday was a busy day tying up loose ends.   I went to the local phone store and got my phone and the air card put on minimum plans for the time we’ll be out of the country.   I also went to the bank for a money order to pay our taxes on the AZ property.  Taxes on both lots and the park model trailer came to $300.46 for the year.  We also will have a strata fee of $530 per lot due over the winter.   I also visited my Mom in the care home.   She was doing fairly well and gave me some nice smiles, kisses and hugs.
We were up early this morning to start preparing for our departure.  We went over to the rodeo grounds to add some fresh water to the motor home then dumped the tanks at Charlie’s.  We have parked the pickup in Charlie’s side yard with a trickle charger hooked up to try and prevent the battery from discharging too much.   We were on the road just before 10:30 and were set up in the campsite by 2 pm. 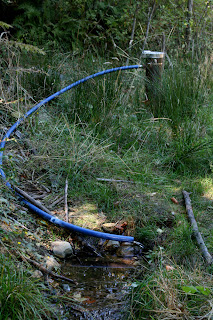 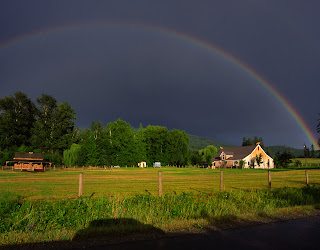 Posted by John and Aileen on the road at 3:45 PM