SOUTH OF THE BORDER DOWN FORKS WAY!

We were up shortly after 6 am this morning and on the road by 7:45.  We arrived at the Black Ball Ferry dock before 8:30 for the 10:30 sailing.  We did have a reservation but still had to be there no later than 9.  The ferry was jammed full and not everyone got on.  I guess it was because of the Dungeness Crab Festival in Port Angeles.  We paid $267.35 for the hour and a half ride.  When we got to Port Angeles, we found a place to leave the motor home.  After a quick lunch, we took the car and drove to Safeway to restock the fridge with those things they don’t want us hauling across the border, even if we bought exactly the same thing here.  Maybe they’re trying to help out their local merchants?
After rejoining the motor home and hooking up, we headed west and south to a little recreation site about 12 miles south of Forks at milepost 177.  We stayed here four years ago and are parked in the same spot.  It is just a gravel parking lot but the price is right and we’re dry camping.  Can you still call it dry camping when it is pouring??  We’ve had some really heavy rain today and the river beside us is quite muddy.
It was a bonus to have our Verizon aircard working today as I thought I’d have to find a Verizon office to get me back up again after the confusion we had over our bill.  Here’s a warning for other Canadian’s who may follow the same process to get internet.  When you suspend the service upon returning to Canada, the suspension only lasts 90 days then you have to re-suspend it again.  Apparently you can’t do it for longer than 6 months out of 12 either.   This wasn’t what the slick salesman in Quartzsite told me but it’s what I found out from Verizon later.
We had a great weekend visiting Richard Robin and Georgia.  We met R&G at the Saanich Farmer’s Market Saturday morning then later went for lunch at the Old British Fish and Chip café where Aileen and I had eaten on Friday.  Lunch was just as good again.  We got more dessert from the gluten free bakery for supper that Richard prepared.  It’s a good thing we’ve left Victoria, there are too many calories there.
Tomorrow we plan to only travel 2-3 hours to get to Montesano, WA to visit our AZ friends Jim and Betty.  They are the people we bought our AZ property from.  We’ll have to check out the weather all over to see what our best options are.  I can’t say we enjoyed today’s offering!    I did see several other bloggers are having wet weather including some snow on the North  Rim of the Grand Canyon. 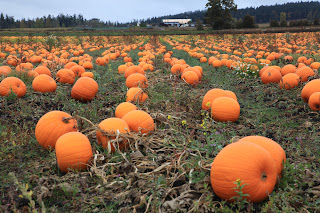 I saw these pumpkins while returning to Victoria from Saanich yesterday 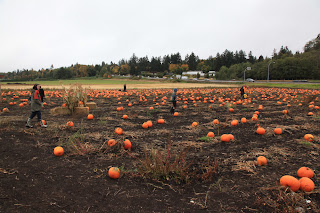 Mitchell's Farm Market allows people to pick their own pumpkins 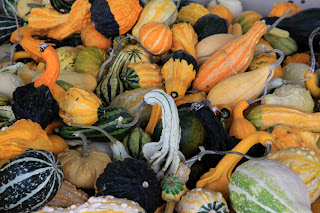 Their were interesting bins to look at inside too
Posted by John and Aileen on the road at 7:06 PM