WORKING OUR WAY UP I-5

That wasn’t the best night for sleeping and certainly the exact opposite of the night before where we had absolute silence in the hills above Bouse.  We were up at 6:20 this morning and on the road at 7:12 am.  The wind all the way to Tehachapi was just awful.  Our gas mileage went right down the tube and lots of time I had to slow down a fair bit.  The motor home was in third gear at 3200 prm for miles when it should have been in fifth at 2200 rpm.  We stopped for gas north of Bakersfield.  In Arizona, you just stuck the nozzle in the tank and locked it on.  In California, you have to push the nozzle in to depress the spring then hold the trigger the whole time.  Both my hands were tired by the time I got done.  We stopped for lunch just before getting on I-5 from Route 46.  Aileen had a short nap then took over driving which is why I am typing this at 12:53 along I-5, and we’re still fighting the wind.  We got to Santa Nella and checked in to the RV park of the same name.  At least we’re a little further from the freeway tonight.  535 kms for us today.
The weather forecast now has tomorrow looking like the only non snowy day for the Siskiyou Pass so we’ll check in the morning and if it is still the same, put in a longer day and get ourselves over the pass.  It’s the highest point on I-5 and the weather can be very fickle.

Between Mojave and Tehachapi, there are hundreds (or perhaps thousands) of wind turbines.  Aileen grabbed this picture as we were rocking along in the wind 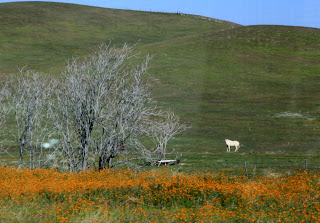 Aileen grabbed this shot as we came careening down the mountain from Tehachapi to Bakersfield.  Shooting out the window is a problem with reflections 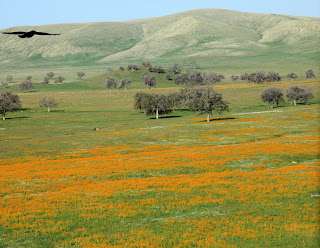 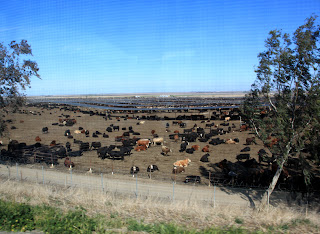 These many thousands of cattle in this feedlot along I-5 didn't smell very nice, I was dozing and came to wondering what the horrible smell was.  I shot this through the window screen 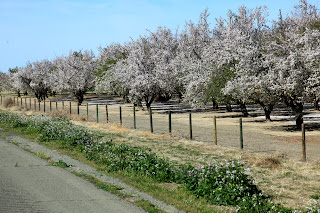 We drove past miles of these almond trees in bloom and there were many places where the orchards were on both sides of the road.  That was poor planning as the honey bees tend to go from one side to the other and the mortality rate is very high.  I cleaned the windshield three times so we did in quite a few honey bees ourselves and there are thousands of vehicles using those roads daily.  Where the orchards were on just one side of the road,there were no bees on the roadway

Posted by John and Aileen on the road at 7:10 PM