LAST DAY IN THE US THIS TRIP 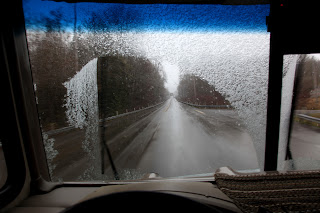 Yucky on the windshield


Our plan was to hang around Victoria to visit the kids on the weekend so I thought we’d stay a couple more nights at the cheap park in Elma since it is so expensive near Victoria.  However, Aileen found out this morning that wasn’t the case after all, so we decided to head for the ferry today, blow through Victoria and get further up Island.  We are in Sequim, WA tonight and hope to get on the ferry in the morning without a reservation.  We took a drive out to Aberdeen, WA this morning but there wasn’t much to see as the weather went downhill on us.  It started raining before we got to Aberdeen and didn’t quit until we were in Sequim hours later.  We had snow building up on the windshield several times whenever the road gained a little elevation but it wasn’t sticking on the road.  We only put on 180 kms today in about 2.5 hours of driving.  That would be about 112 miles, I think.
Posted by John and Aileen on the road at 6:40 PM