SO LONG FLORENCE FOR THIS SEASON, HEADING WEST

We hit the road about 10:30 after saying farewell to several friends.  We made a quick stop in Coolidge for water and a couple grocery items.  We also stopped in Casa Grande looking for a replacement valve for our little portable barbeque.  I did look at a small refillable propane cylinder but they were $60, nearly double a 20 pounder.   The barbeque can still be used but not too easily since the valve handle broke off.  We only went as far as Gila Bend since we aren’t in a hurry and this gives Aileen time  for a long nap.  She has been running low on naps lately.  We are at the Holt’s Shell Station campground using our Passport America card for the first time.  Our full hookup site cost $13.50 including taxes.  The membership should be paid for with no more than four nights use.
We had a large group riding Saturday, at least 19 or 20.  Eddy decided I should take lots of pictures since it was my last ride of the season and helped set up several photo ops.  I shot 421 pictures in all.  We had a really good ride and once again, I got to ride on trails I’d hadn’t before.  And here I was saying I’d ridden all the good stuff.  The past two weeks have been an eye opener and now there are lots more trails I want to check out next time I’m back here.
I managed to share my ATV digital slide show with quite a few club members and other friends and have received enthusiastic responses from several of them.  I like to share my photography and it has been a little more difficult while on the road.  When we lived in our house and were there most of the time, I would put on slide shows for seniors homes and other groups.  It would be great to have a good quality digital projector but carrying a large enough quality projection screen is the big issue.
Aileen was sad to hear her cousin Richard had succumbed to cancer on Saturday.  He was two months younger than her.  She was glad she and her sister Anne managed to get to visit Richard last year while he was still able to enjoy the get together.  Aileen had a bad reaction to some food she ate the other day and was violently ill in the night.  Lucky me slept right through it all!  We both finished up our typing for the community paper yesterday and turned in the results and the key to the collection box.  Someone else will have to step in and finish the next issue.
Yesterday, Aileen went to the Celiac Support meeting and came away with a huge book detailing all the brands and foods that are gluten free plus much more info.  The members of the American Celiac Association apparently get a new copy every year so one chap was giving away his last year’s version.  Aileen was delighted to accept it.   We went to Bud and Arlene’s for supper last night and Bud put on a good feed.  The best part was he and Arlene paid close attention to what was used in the preparation and Aileen had no ill effects at all.  She was so pleased.  I took pictures of the pirate ship Bud bought during spring fling and downloaded them onto Arlene’s computer.  I put the ATV show and the two rides with Pete and Randy on there also.  They will get lots of pleasure out of seeing all the backroads scenery they used to enjoy when they were younger and roamed around in their little Suzuki 4x4.  They are also looking forward to sharing with family and friends when they return home. 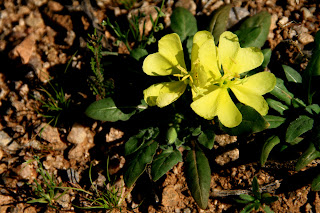 I don't know what kind of flower this is but it was all by itself within a foot of our ATV track.  I saw one other the same, miles later

Our large Saturday group posing for me 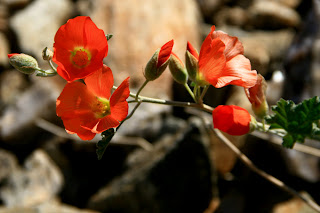 Orange mallow, I only saw two bushes all day 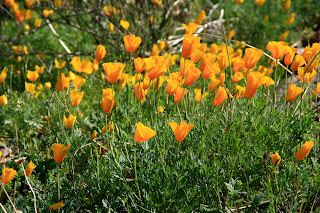 The hillsides are covered with these beautiful poppies 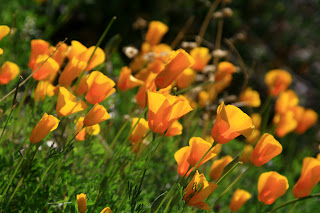 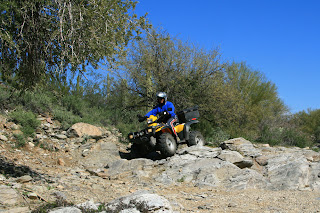 And lastly, here's a bit of a rarity, pictures of me actually riding