THE TERRA HAS LANDED ON VANCOUVER ISLAND

That wasn’t the best night for sleeping.  We were awake several times in the night.  Aileen finally got up about 5:30 to wash her hair then fed Mitzy.  I took Mitzy out then did the power cord, garbage and readied the car while Aileen put the slides in and the jacks up.  We pulled out about 6:02 am and headed down to the ferry lineup.  We were about number five so no problem getting in without a reservation.  It cost us $247.50 this time, I believe.  The crossing got quite rough with the ship wallowing side to side and slamming down into troughs causing spray to come over the bow and drench the windows.  I was starting to feel quite queasy for a while.
The customs guy was very polite and easy to get along with which was good.  We got out of town as fast as we could and started up the Malahat which the electronic signs proclaimed to be bare and wet.  Not!  We ran into snow before even starting up the first hill and before long it was sticking to the road.  The guy in front of us had a two wheel drive pickup towing a car on a dolly and he did quite a bit of fish tailing.  The Terra motor home felt very secure, which was good.  I’m not sure about some of the rest of the crew though!  We stopped at a rest area south of Nanaimo for lunch and the rain mostly stopped for it.  We even had some sunshine in the Nanoose to Parksville area.  Thankfully it was not precipitating while we did our set up at Charlie and Sheila’s.  It was 3072 kms from Florence (1920 miles) to Errington where we will be for the next few weeks. 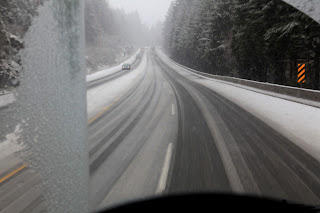 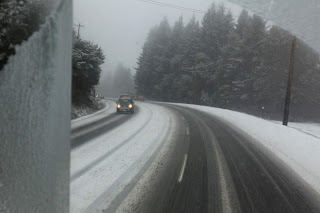 And then it got worse!  At least most of the other traffic was driving carefully