I went riding with the group on Thursday and it was nice having our regular leader, Ed from Saskatchewan.  He always puts together a nice ride.  On Friday Aileen and I went up to Chandler since Sprouts Natural Foods had a big sale on.  We stopped for lunch at Barro’s Pizza as they advertise a gluten free pizza.  It must have been cross contaminated in the oven or something as Aileen was sick in the evening.  We went to Casa Grande on Saturday and had pizza at Picazzo’s and she had no after effects.  Picazzo’s is different in that they have a separate kitchen for the gluten free menu.
We have been looking at computers for Aileen but haven’t found one yet.
We’ve been emptying out the park model deciding what to take with us in the motor home and what to take to our storage shed at Bev’s.  The rest either stays in the park model or is disposed of somehow.  The Honda CRV will be well loaded for the trip north this year.
There are two horned owls in the park again this year and I’ve made several tries at photographing them, as have several other people.   We’ve managed to go to one of the pools most nights but it is inching up in temperature.  The other three pools have all been too warm for Aileen.  Mitzy had us up at 1 and 4:30 am yesterday needing the dog park.  Aileen took her first then I did the last.  Last night was a repeat and we didn’t think it would be so urgent so didn’t follow through.  Mistake!!!!  Around 4 am she was really in distress and when I got up to take her, it was mostly too late.  Aileen had the mats mostly cleaned when I got back from the dog park so we took a load of laundry down and did it.  That is why I’m working on my blog post before 5 am today.
On Sunday, Aileen cut my hair and bathed and clipped Mitzy.  She made good wages that day.  I went to part of the music jam but only got to hear Wendy sing once as they quit just as it got to her.  They had to quit early since there was a Super Bowl party happening in the hall right behind them. 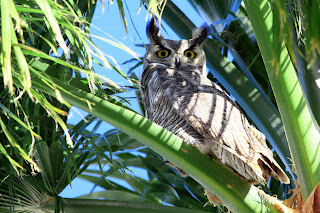 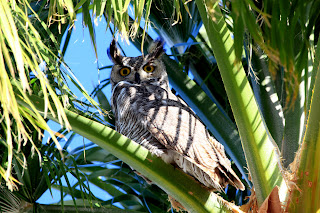 One of our resident owls, there is a pair of them 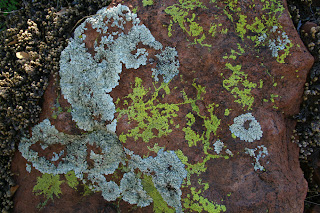 Lichen on a rock on our Tuesday ride


Gonzales Pass on Hwy 60 from the rock I hiked up to.  If you look in the lower center right, you can see the ATVs where I started from 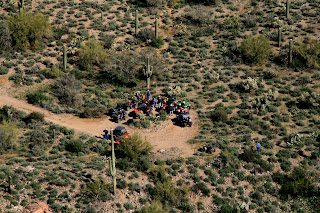 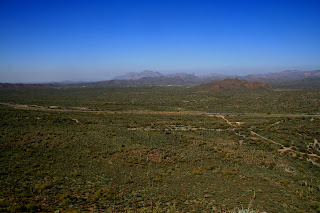 Looking northwest from the hill I climbed 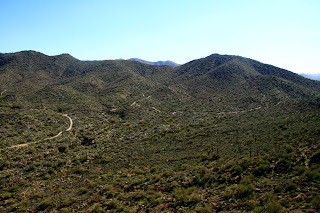 Part of our route home 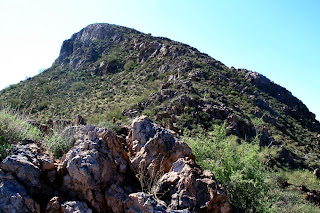 The hill beyond where I climbed 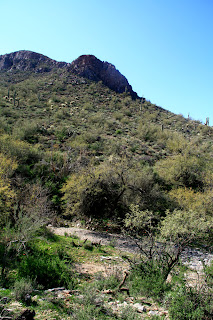 After a quick lunch, I hiked up to the right hand rock outcrop 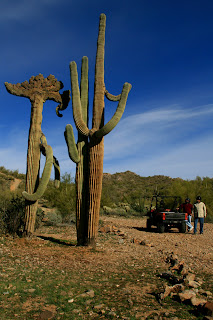 Pete and Randy at the crown cactus 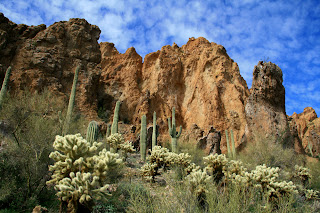 Along the Martinez Rd

Yesterday, I took Mitzy out back on the ATV before going for my ride.  Pete Moris came along with his friend Randy in his red Rhino.  I took them to the turquoise mines then to the crown cactus and out to Box Canyon.  We puttered up the canyon then turned up the Martinez road which it appears they were on the other day.  I took them over the high line road which they enjoyed.  We stopped for lunch down in the wash part way through the high road.  It was very quiet out there as we only saw three ATVs and four jeeps the whole day.   We came home over the Little Spline which they’d also done.  Aileen took Sophie, the cat, to the vet in Coolidge for her annual teeth cleaning.  Her blood work all checked out very well.  She’s in surprisingly good health considering all her issues when we first got her after she’d been rescued from a drug house.
Posted by John and Aileen on the road at 5:09 AM