We've run into a few days of mostly rain so it has slowed us down a lot.  We're parked in Kokanee Creek Provincial Park between Balfour and Nelson, BC.  With all the rain and heavy cloud, we've had to run the generator a few hours each day to keep the batteries charged so our CPAP machines keep on working all night for us.  We've had some pretty heavy downpours over the past couple days. Fortunately we are into the half price season for BC seniors so it is only costing $14 per day to stay and there are free hot showers. We've been up to Ainsworth Hot Springs a couple times but Aileen only went in the once.  They are a little too warm for her.
This morning we took a drive over to Castlegar stopping along the way to visit daughter Bev's friend Mona.  I left Aileen visiting while Mitzy and I went and found three geocaches.  Mitzy rolled in something foul so I had to take her down to the river and give her a partial bath.  Neither of us liked it! Aileen gave her a proper bath when we got home later.
Our current plan is to stay here until Wednesday when the weather is supposed to improve, then we will start heading for Salmon Arm most likely arriving back in the Shuswap on Thursday.  We had planned on more time in the Kootenays but since the weather isn't co-operating, we might as well be back at home base working on the things needing done before we head south.   We could cross the border as early as October 13th.  We don't have a route south selected yet so that needs some thought put into it soon. 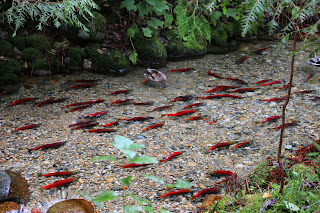 The Kokanee, which are a landlocked Sockeye Salmon, are spawning in great numbers in Kokanee Creek. 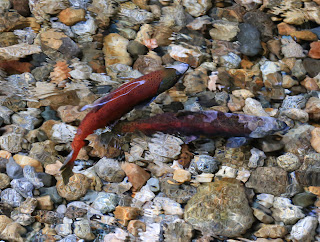 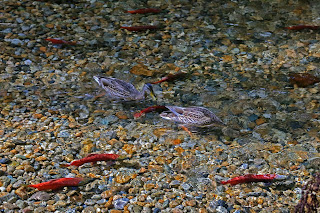 Unfortunately, the ducks are eating the eggs nearly as fast as the fish are laying them. 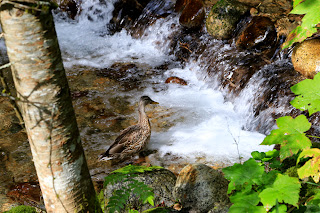 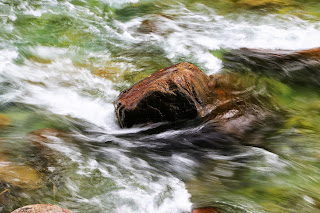 Yesterday afternoon we took a walk along the Kaslo River trail which has suffered several washouts in recent flooding. 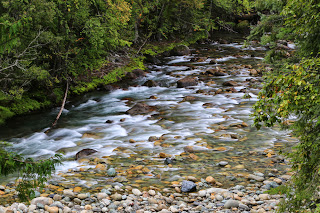 Posted by John and Aileen on the road at 4:40 PM