BACK TO HOME BASE FOR A FEW DAYS 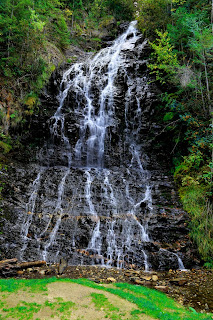 Ione Falls is at a rest area between Nakusp and Galena Bay.  We made a brief stop there this morning.

After several very rainy days in the West Kootenay, we made it back to the Shuswap after a longer than usual driving day for us.  There was a free ferry ride in the middle and we only had to wait a few minutes before boarding.  We almost didn’t get on as the boat was pretty full but after initially stopping us, they sent us down to board.  We had to go cross ways across the back of the boat to fit on though then they had to inch us ahead so they could close the safety gate.
I was surprised how busy the Trans Canada Highway was and even though traffic was moving along above the speed limit for the most part, there were still those idiots that had to risk lives passing dangerously.  We’ve been spoiled the past month or so with the quieter roads we have traveled.
We will be busy over the next few days.  Aileen has a tooth repair appointment on Monday, the car and motor home both need oil changes, I have some banking issues to follow up on and the list goes on.  I still have to come up with a starting plan for heading south before we cross the border as early as October 13th.  The motor home needs a good cleaning inside and out while we are parked here too.
I had hoped to get in a couple days of geocaching while in the West Kootenay but the weather wouldn’t co-operate.  We spent the past two nights at Lemon Creek RV Park and Lodge and we were the only RV there.  One cabin was occupied though.  I got out on Tuesday afternoon and found 23 caches.  Wednesday it rained hard all morning and off and on in the afternoon so we took a drive along the Slocan River back roads in the morning and up the highway to Slocan, Silverton and New Denver in the afternoon.  We popped into a few stores and boy, it is a lot more expensive to buy groceries in those towns.

Posted by John and Aileen on the road at 8:17 PM