ON TO BANFF NATIONAL PARK 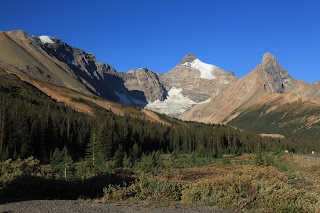 One morning we hiked up the Parker Ridge trail.  It isn't too strenuous a hike and affords some fabulous views.  It is located a few kms south of the Athabasca Icefields.  This photo was taken from the parking lot. 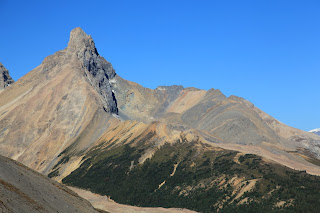 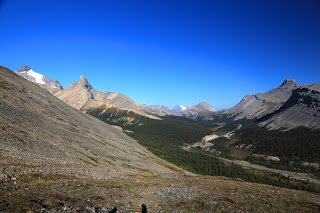 Getting some elevation.  You can see the highway down below. 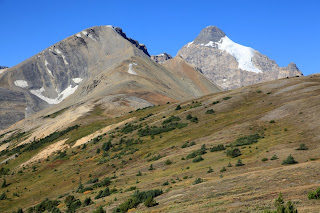 Up on the ridge. 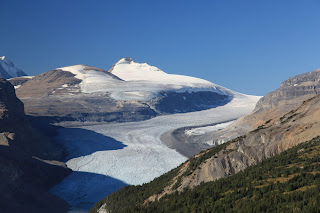 For the best views of the Saskatchewan Glacier, its lake and the start of the river, just keep walking along the level following the path to the southeast. 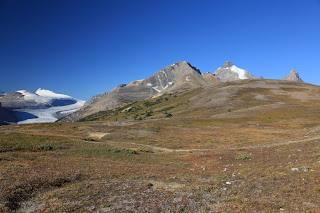 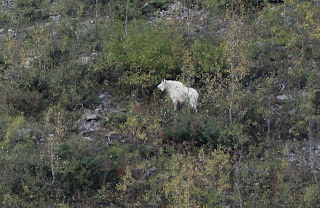 We were camp at Rampart Creek Campground and two nights in a row I went about 5 or 6 kms north on the highway to a little wildlife viewing area/picnic area and spotted a mountain goat up on the mountain side.  Actually there were two the second night but one was really far up the hill.  I cropped this heavily from a 400mm shot. 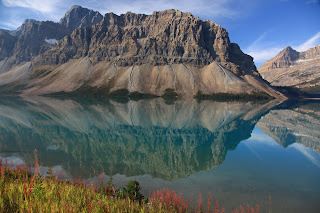 Yesterday, we moved camp down to Castle Mtn Campground between Lake Louise and Banff on the Bow Valley Parkway.  Coming past Bow Lake, which is just south of Bow Pass and Peyto Lake, the reflections were marvelous! 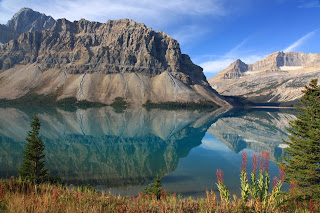 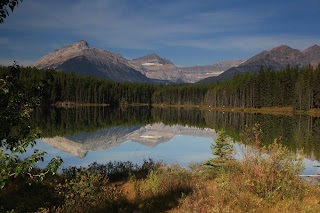 Further down the highway, just before Lake Louise, Hector Lake wasn't too bad either. 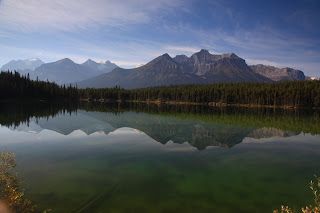 I had been having issues with my main camera, a Canon 5D Mark 2 for a couple days and in fact we aborted our hike at Peyto Lake when the camera refused to work.  After cleaning lens and camera contacts, I was able to sometimes jolly the camera into taking a picture.  The shot above is the second last photo it took.  Then it really got into some kind of snit.  Not only is the camera hooped, my main lens, the 24-105, also is refusing to work.  They will have to both be sent to Canon in Toronto to see if they are economically repairable.
After agonizing and researching, we drove into Calgary this morning and visited Robinson's Camera Store.  I came away with a new Canon 6D with a new 24-105 lens.  I'm hoping my old 5D can be repaired so I can use it for wildlife by permanently mounting my 100-400mm lens.  My older Canon Rebel just doesn't cut it for shooting wildlife because so often the light is low and the camera doesn't produce good images at more than 200 ISO.  I hope that's not too technical for everyone.
Posted by John and Aileen on the road at 9:12 PM