BACK IN ERRINGTON AND A VISIT FROM RICHARD AND GEORGIA 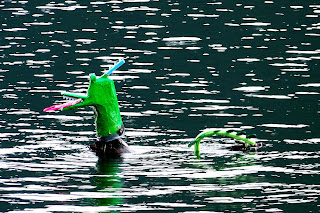 For years there have been reports of a monster lurking in the depths of Cameron Lake and there is a team coming to investigate. Well, I beat them to it with this picture. Actually, one of the locals wanted to make it easy for the investigators so he installed this one for them. 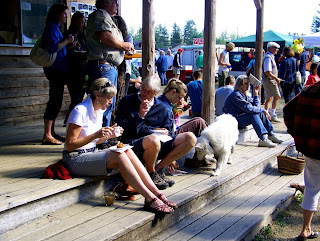 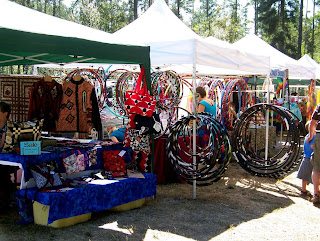 Lots of colour at the market 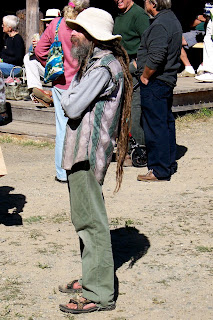 Forty years ago this guy would have fit right in with the large hippie population we had in Errington. Today he is an exception. Notice how long his dreadlocks are. 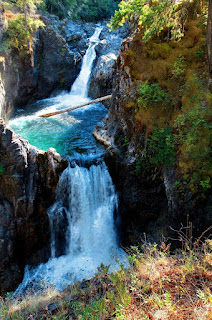 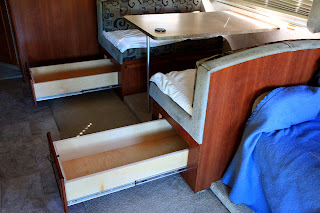 Aileen's new drawers under the dinette 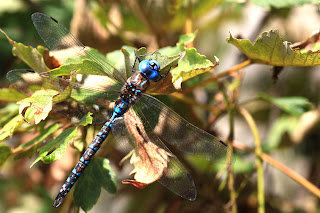 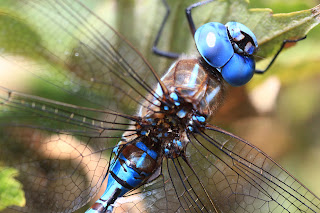 One of Charlie and Sheila's roses

John and Anne came for supper last Monday. Aileen made a meatloaf and spuds along with steamed veggies. She also made a cherry pie in the convection oven. It was arranged that Ken and my cousin Donna would come for dessert then I got a call from my cousin Chris asking if she and Gord could come too. So they all came plus Donna’s son Ross which made for a good house full. We sure couldn’t put nine people in the trailer. It wasn’t crowded though, just the same. John and I put the slide in using flashlights since the time got away on us. It certainly was easier and faster with two of us.

Tuesday was a fairly nice morning with some sun even. We managed to use site 152 to dump our tanks on the way out. The Cluxewe dump station is poorly laid out. You have to park on the wrong angle and in front of the laundry. We hooked the car up there then stopped and visited Earl and Sharon for awhile. We exchanged emails and perhaps we’ll get together in AZ this Fall. is the sister of the lady we bought the motor home from.

We stopped for lunch at just about noon. I offered Aileen a nap but she declined. By the time we got to , she was wishing she’d had one so I stopped at the Indian gas station and let her have 40 minutes. It helped. We got to Arbutus just after 3 and they got right on the motor. It cost $56 for us with the warrantee. The motor was $778 plus labour.

We stopped at rest area for supper. Aileen whipped together some nice stir fries. From there we stopped at the Coombs rodeo grounds to fill the water tank then over to Chas’ to get set up. When I pushed the slide button, nothing!!!! I crawled underneath and wiggled the wires and it worked fine for Aileen. Whew! Our showers felt good that night.

Aileen was out in the car a couple of times Wednesday. Once for a much needed haircut down at Errington corner and then again for dog food. I helped Chas and Sheila most of the day sanding or sweeping cedar boards that Sheila then varathaned and also cutting boards. Chas found time to make Aileen the drawers for under the dinette which turned out really well. Aileen is very pleased with them.

Aileen managed a good nap that afternoon. My sister Janet came by for awhile later. After Janet left we four here had supper together then went to for a swim. It was refreshing, not bad once you were in but a little tough to make the plunge.

We went to Qualicum on Thursday to pick up my new glasses and Aileen got hers cleaned. The new glasses seem pretty good. I don’t notice much difference but they are slightly sharper. They seem to have gotten the progression right and I don’t notice any issues getting used to the different way they have put the lens together.

Later we were off to . First stop was The Bay for Aileen to get her face stuff while I went to Canadian Tire to inquire about drop hitches. Earl’s friend had mentioned he didn’t think we were set up correctly with the tow bar. I did some online research which supported his claim. I had mentioned to the installer that perhaps the mount should be closer to level but was assured everything was fine. When I called Arbutus and inquired of the acting service manager, he said the hitch should be within 3-4 inches of level. So I asked why I had been sent out of their shop with the current set up. He said “oh, you should have brought both your vehicles in” to which I replied “I did and your man did the hook up!” He offered to give me a smoking deal on a drop hitch but when he asked if he could go ahead and order it, I asked for a price first. It turned out my quotes from Lordco and Mid Island Hitch both were $20 less! So much for his deal. The next stop was Nanaimo Honda to complain about the dirty windows they gave us. When we went to the night before, driving into the sun, the front window was filthy. We had to wait awhile but they did a full detail and it seems pretty good. I guess we’ll see next time we drive directly into the sun.

I spent Friday morning helping Chas in the new third bedroom in the cabin putting the ceiling boards and trim up. It looks quite good. After lunch, we went to Merville for the two Fantastic fans I had ordered. I got the old slide motor back also and we took it up to cousin Bill for him to play with. We visited awhile then were going to stop and see friends Lynda and Perry in but they were just about to head out to for something at 5 so we gave it a miss. We went down and followed the old highway to Qualicum then back up to the freeway and down to . Supper was at the Hong Kong Restaurant. We picked up three more rugs at Canadian Tire to put down in the motor home.

Richard called Friday evening to say he would be driving up Saturday with Rob and Beth’s van as he has to pick them up at the airport Sunday evening. We just got home Friday night when Randy and my sister Wendy arrived. We were going to watch a raw food video Sheila had borrowed so they watched it with us.

I cleaned several of the motor home windows Saturday morning. Richard and Georgia arrived from about 10:20 that morning. Chas, Richard and I went down to the market after a bit. There was a blue grass duo on the stage and Randy and Wendy were sitting in front listening. I took a few pictures using the little Kodak.

The air card died Saturday when I went to use it so I took it in to Telus who just confirmed the fact. I didn’t think much of the options. Since the card was off warrantee, I can buy a new one outright for $200, renew the three year contract and get one for $50 or just drop down to the lowest monthly rate which is now $30 instead of $10. Bloody crooks!!! We really only need it for the last two weeks of September as we can’t use it once we head south of the border since Telus no longer has a useable roaming agreement with any US companies. It is quite unfortunate that our contract runs til April 2012.

Later Saturday afternoon, and I went to Little Qualicum and walked to the lower falls then up the other side to the more impressive upper falls. I took my 5D and snapped several pictures. Aileen and Sheila put together a nice stirfry for supper. They both made desserts. Aileen’s was a blueberry upside down cake and Sheila did a tasty raw pie shell (nuts and dates) with raw fruit filling. Both were very tasty. I took Mitzy out in the swamp field after supper for a run.

Aileen had sewn some cloth shower curtains together which we used to make a curtain around ’s bed on the jack knife sofa. The idea was to darken it so she would go to and stay asleep. It seemed to work well.

We mostly sat around this morning although Aileen went with Richard and Georgia down to see my parents. It wasn’t a good day apparently. Dad was mostly sleeping and Mom was in foul humour and didn’t want to visit with anyone. The care facility have taken their two room suite and converted it back to two separate bedrooms. Thus far, one room was their bedroom with both beds together and the other was a nice sitting room. I washed motor home windows again. I did the front ones today as my arm wore out the yesterday before I got to the front.

, Chas and Sheila’s second oldest and Sandy were out from for his friend’s wedding last night. Chas and Sheila picked them up the other day at airport and Richard took them back to the airport this afternoon when he went home.

Later this afternoon, Aileen went and picked up her friend Bev from down in Parksville where she is visiting her Mom. Her Mom was taken to hospital Friday with a sodium deficiency and was able to come home that night after having tests then a saline drip.

It looks like I will be taking the pickup and trailer up to Salmon Arm to put on a consignment lot within the next two or three days. We need to find them a new home since they no longer fit our plans.

Posted by John and Aileen on the road at 7:42 PM