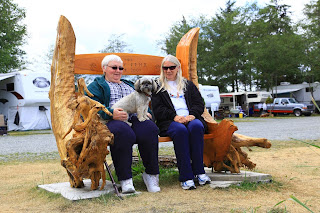 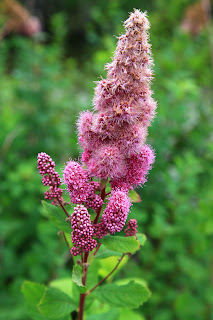 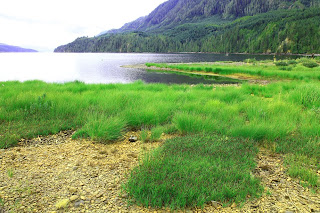 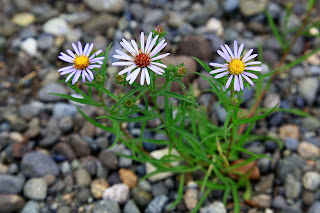 Flowers and grasses along the shore of Nimpkish Lake 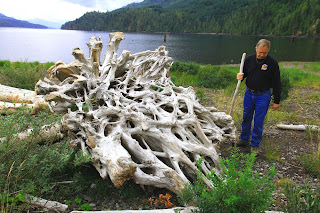 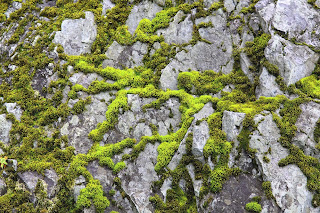 Moss growing in the cracks of a rock 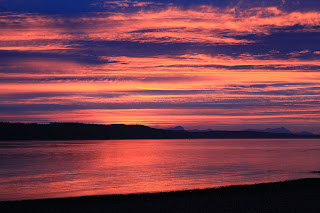 Today's sunrise just after 6 AM

It was raining well Saturday morning so we didn’t bother going into town for the Orca Fest parade. Cousin Bill drove up from to visit so we stayed dry in the motor home. Bill had brought some delicious corn so we had a cob each for lunch. It had brightened up by mid afternoon so after Bill departed for home, we decided to go into town for a few minutes. We had a quick look around the displays in the mall parking lot then the rain began again. We hit heavy rain on the way back to the motor home.

John and Anne arrived about 6. Aileen had done a roast in the crock pot and we had the last 4 cobs of corn along with mashed spuds and gravy and raw veggies. That morning, she’d made a loaf of bread and a pan of buns in the convection oven and they turned out really well.

We went for a walk along the beach after supper then played Mexican Train. I won followed by John, Anne and Aileen. Anne had been behind the whole game and in the last set went out and caught Aileen with a mitt full allowing her to sneak third.

We had a quiet Sunday morning mostly sitting around and taking Mitzy for a couple of walks. On the second walk, as we went by Anne’s, she joined us and came here. John had gone to town for something and joined us later for lunch. We sat outside for a couple hours watching the boats go by then decided to go for a drive in John’s truck. We went to the bottom of and walked along the shoreline. It was a relaxing break. We had driven down the highway to get there but returned via logging roads to the Benson Mine road just above the highway which seemed shorter.

I called my aunt Nancy to invite them for lunch tomorrow but she said they couldn’t make it since they were going to Courtenay in the morning. We and John and Anne went to the Cluxewe café for supper and we were just finishing up when I looked out and saw Mac and Nancy walking in. They decided to come have supper here and visit us. They came to the Terra after they ate and stayed til about 9. John and Anne were here also and a visiting good time was had.

This morning I looked out just after 6 and saw an interesting sunrise so roused myself enough to get some pictures. It is windy today and I’m watching a lady having fun flying a kite on the beach. She’s having difficulty controlling it with the gusty wind and so far has hit a stump and stuck it in a tree. She managed to get it down from the tree. Aileen went into town for a few groceries later in the morning. After lunch, two sisters traveling in a Class C motor home came and looked at a few of my pictures. They were interested in the trip we took last year. They live in Comox and .

Tomorrow morning, Tuesday, we head back down . We will get the new slide motor installed then return to my brother’s in Errington for awhile.

Posted by John and Aileen on the road at 2:51 PM