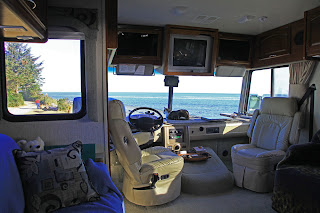 The view out the front of our motor home 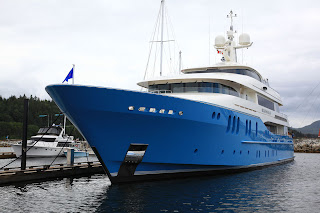 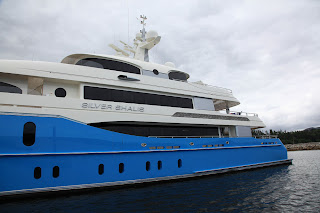 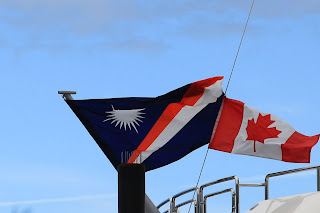 The flag on the Silver Shalis, we were unable determine what the flag represents 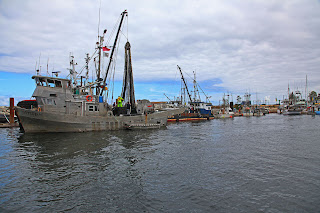 The working side of the Port McNeill harbour 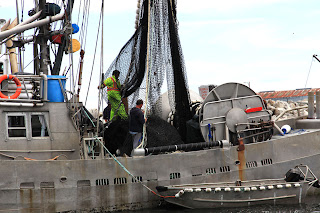 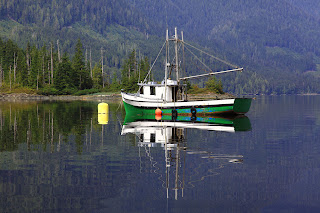 A moored boat near Port Alice 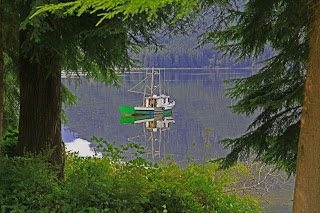 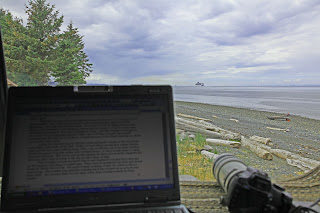 My view when I first saw the two cruise ships approaching 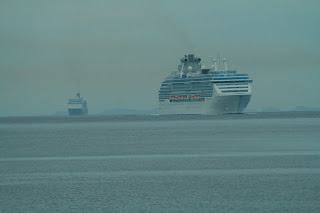 The ships appearingout of the haze 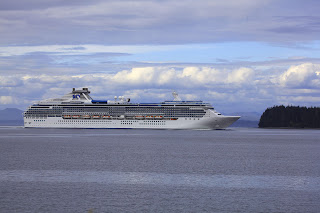 Anne came out for awhile Wednesday afternoon then returned home to gather supper supplies and John. She made her yummy seafood pasta dish. After sitting at their table for quite awhile, we started out on a walk back to the spit. We stopped to chat with some old friends of theirs in site 92 and that was as far as we got. Jim the husband would love to do what we’re doing. Jean thinks she could go along with that too. I gave her one of my cards.

Thursday was a gorgeous morning but then it clouded over. We did get a bit of sun just after 5. We went to town and did a bit of shopping then ate lunch at the Sportsman. We both had salad bar. We noticed the Silver Shalis tied up at the dock in Port McNeill so after dropping Aileen and the laundry at Anne’s, I went down and took more pictures. It is sure a big boat up close. One lady thought it belonged to the owner of a boat manufacturer but I didn’t see a flag on board, just a small Canadian and the blue one at the stern. I wandered most of the wharf checking out all the nice (mostly) US yachts.

Aileen did steamed veggies and new spuds and made a dessert in the convection oven while I did steaks on the grill. While we were sitting around after supper, Dennis, April and the kids came walking along. After a bit, we all went out to the point and then around the grassy loop then Aileen and I returned home. It was a mostly sunny evening with a bit of sunset. The waves were gently lapping the shore as I sat at the computer and there was still a hint of colour in the sky giving a sense of calm.

This morning we took our lunch with us and wandered over past Port Alice and up the logging road a ways to a quiet spot. There were no sounds but the birds and distant creek the whole time we ate. We made it home in plenty of time for Aileen to have a serious nap. The weather was great this morning but it has clouded up on us in the last little while. I had a call that the slide out motor had arrived at the RV repair shop so we should be able to get it installed next Tuesday or Wednesday.

Posted by John and Aileen on the road at 5:31 PM