THE TOWBAR, A PROBLEM AND BACK TO CLUXEWE YET AGAIN 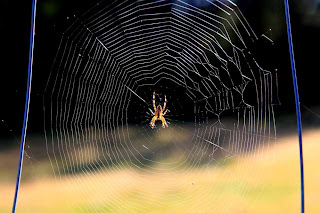 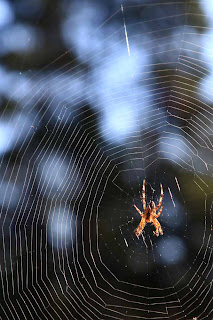 Spider and web on the fence at Charlie's 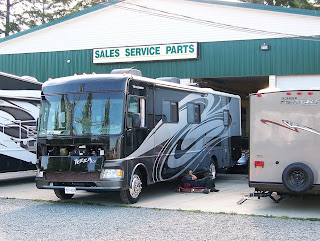 Not the place where you want your RV! 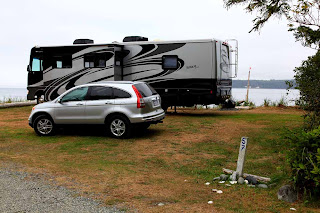 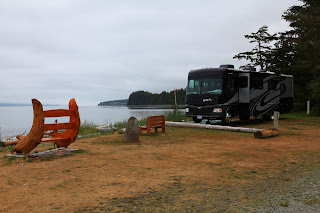 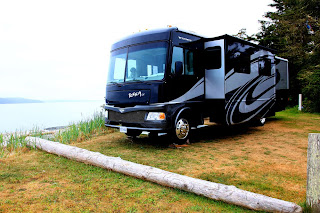 Mitzy enjoying the view from the dash 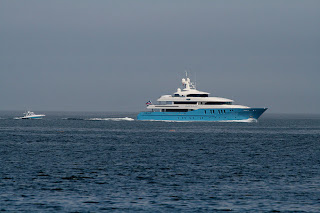 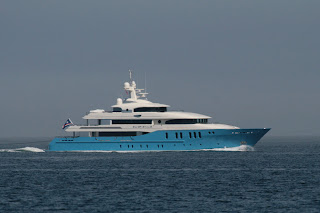 I went off to the Fair before 9 Friday morning. I put about 6 hours in on the photos. I was score keeper and helped sort and hang etc. One helper, Mary, came late and disappeared after lunch. So there was just Donna and me and Donna left at 1:30 so I was left to apply scotch tape to what was left so the pictures didn’t fall off and put category labels up. I had to do some rearranging as well. At least it got finished that day and nobody had to go in later.

It was interesting, the two judges were from the local photo club and I remembered the one from the meeting I went to as she had the HDR image that decided me on getting the program. The other lady was the acting executive director at The Manor when we took Mom and Dad in a couple years ago. Gail, the first one was friends with our ex neighbours Barb and Peter Kilby. The second lady Lynn, was going to be in site 62 at Cluxewe this week when we are in site 57! They checked in Monday for a week and we are Tuesday for a week. Anne emailed that morning and said that was the only partly serviced site available so she took it for us.

I went to the Errington Market on Saturday morning for veggies then we packed up and departed. We stopped at for lunch. Aileen drove the CRV all the way to . Aileen made salad and prepared the spuds I bought this morning. I cooked them on the side burner and pork chops on Bill’s brand new barbeque. After supper, we took Bill’s van and picked up Barbara and Maynard and went to the Pier for ice cream. We spent quite awhile out there watching the boats and seals.

We went to the Market at the Pier Sunday morning. Aileen got another bib and a couple kitchen towels and three cinnamon buns. I picked up a bag of new spuds. The buns were really good when we had them at lunch. Aileen had a nap after lunch and after I finished my book, I dozed little myself.

Bill’s friend Maynard and Barbara came late afternoon then Bill’s nephew Paul and Judy with their daughter Jill and her son Archer. Bill’s son Tony came on his bike and later in the evening Tony’s wife Rita and daughter Jessica arrived with the pies for dessert. Rita had been to her God daughter/niece’s 16th birthday supper. I cooked the smokies and hamburgers which sure were tasty. Tony had brought corn on the cob and we had several salads. We had a visiting good time.
What a day Monday was! Up early, forced down some breakfast then down to Arbutus Trailers by 8:20 to get the tow bar installed on the Honda. We hung out in the motor home all day. I took Mitzy for a couple walks and wandered the RV parts several times. I read for awhile also. It got too warm about 1:30 so we turned the generator on for the rest of the afternoon. They were progressing well on the tow bar and I was thinking we would be out in good time. Hah! Things fell apart when we tested the lights and the turn signals were faint and the brakes only caused the turn signals to glow. The main thing is we had to leave the car there for them to finish the next day.

So, we come back to Bill’s and set up. The bedroom slide worked well but the main slide went a couple inches and died. Out with the manual etc. I try the manual retract – what a joke that is! We tried all sorts of things. I finally managed to get it almost in then it worked long enough to snug it up but it immediately quit, never to work again. I was dirty, sweaty and tired and supper was very late. Boo hoo!

We were having a good sleep til about 1 AM Tuesday morning when Aileen woke up wringing wet and trying to figure out how the Fantastic fan had sped up. It was the danged furnace set at 75F. I guess when the air was turned off last night, it was left one notch too high. It took her a couple hours to cool off and come back to bed.

We were up early and down to Arbutus by 8:20 telling our tale of woe. They got the tail lights figured out on the Honda and then started on the slide. After a couple of guys crawled around for quite some time, it was decided the slide motor had gone. Of course there isn’t another to be found so their supplier had to order from the States and it will be a week or so. They left the motor out and sent me on my way. It wasn’t long, at the sani dump actually, til I noticed the slide working its way out. We stopped at viewpoint for lunch and to tie it in with some bungee straps.

We stopped at rest area for Aileen to have an hour nap. Mitzy and I walked down to the river then down the logging road to the washed out bridge. We tried to follow the creek to the river for another drink for Mitzy but the dry creek bed started wandering too much. We sat outside the Terra for awhile to give Aileen a little more nap time.

We arrived at Cluxewe about 4:30 and got the car unhooked and the Terra leveled. After putting the bedroom slide out, I proceeded to manually extend the living room slide. It would have been much easier with two people as I had to keep going from one end to the other every few turns. I hope John will be able to help me put it in Monday night. It was much easier to extend it manually with the motor absent. I guess my difficulty the first night was because I was trying to overcome the seized motor. John and Anne came for supper. Aileen made quesadillas which were tasty as usual. I’d taken Mitzy around the whole park before supper including the river trail then we did most of it again after supper. We saw a gray whale through the front window at supper time. He came up quite a few times. I don’t think I could have gotten a very good picture so didn’t try.

Here is a link for the details on the Silver Shalis

Posted by John and Aileen on the road at 5:25 PM