Well, after the record breaking temperatures from Wednesday yesterday was the transition day back to seasonal normal.  Today is forecast for a high of 5C which is a long way from the 22C we had on Wednesday!  Snow in the forecast for tonight and tomorrow but we’re not likely to get more than a dusting since we seem to be in a rain shadow here.  Our temperatures are on a downward slide for the next several days with the highs barely getting above the freezing mark with the lows getting down as low as -8C.

Last fall (2020), Aileen and I gathered a box of acorns from the school yard near the apartment we were in.  When Aileen researched them online, it was suggested leaving them to dry for a year before processing them.  So a few days ago I started cracking acorns which is a tedious job and not fun with arthritis but I got a small bowl full.   She soaked them several times to remove the bitterness stuff then dried them in the oven.  Afterward she ground them up in the blender to make flour.  She mixed some in her last batch of muffins and declared it a success.

Having now shelled a larger amount, yesterday I went to the motor home to get an old pot to use for soaking them.  I took my super zoom camera along for the walk and was glad I did when I spotted a Sharp-shinned Hawk sitting in a dead pine tree along the river bank.  I was able to get quite a few shots before he got bored with me.

We keep our compost in the fridge in a large tote and whenever we go to Penticton we empty it into the compost bin we set up at Karen’s.  Yesterday I went that way for groceries and took the compost along.  There were some Trumpeter Swans in Vaseux Lake as I drove by.  They looked neat dozing in the sun on fairly calm water, but not quite close enough for a good photo. 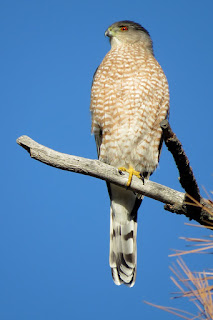 Sharp-shinned Hawk, very similar to a Cooper's Hawk but the Cooper's tail is rounded 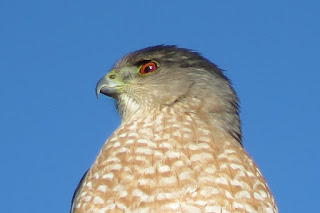 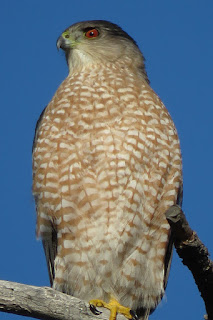