THE PACE IS PICKING UP!

I’ve been out with the ATV group three times in the past week and a half, once with friends Ernie and Ken and three times with Aileen in the new RZR.  Aileen is really enjoying being able to experience firsthand what she has only seen in pictures for years.
We went to a dance at our clubhouse on Sunday night which was lots of fun.  We sat with our friends Ernie and Atha then were joined by two couples from Kamloops, BC and a few others.  The couple who were playing were very good and played a great assortment of danceable music mostly country and 50’s/60’s rock with lots of waltzs for cuddle time.  It is always so much fun to watch some of these older dancers.  They either had lessons years ago or have done a lot of dancing.  Some of them can hardly walk down the street but get them on the dance floor and they really know their moves.
We had quite a time with a sick Mitzy for a couple weeks or more.  She had been in for her teeth cleaning and a tooth extraction a while back.  It seems the stress from that resulted in her getting diarrhea and vomiting.  Aileen kept trying all the remedies but after recovering a bit, she’d be back to being ill.  Aileen took her back to the vet’s on Monday morning and they gave her a shot to settle her system then a saline solution subcutaneously as she was very dehydrated.  The vet told Aileen she had being doing all the right things but sometimes when dogs get in this state, the only way out is the injection.  She seems to be coming along much better but is still quite lethargic.  She is getting her appetite back finally.
Spring Fling was extended a week this year because of weather.  The parade was scheduled for March 1 but it was rescheduled to March 8 as the forecast was for heavy rain.  The lady who made the call received a lot of flack over her decision but as was shown in my last post, at parade time, the rain was pounding down.  The March 8 parade was under gorgeous skies and everything went well.  We had to leave shortly after as we were meeting some of the Celiac support group for lunch in Tempe.
We’ve had a couple card nights with Ernie and Atha playing 2500 and Aileen has done much better than me although I did manage to win a game last night.  Our other card playing friends have been indisposed.  Ken has pneumonia and a major bladder infection and has been receiving quite a bit of medical care.  Jacquie and Jim have arrived back home in BC.
The migration north has already started here in the park and it will really start to accelerate in a couple weeks.  At least three couples on our street will be leaving the week of the 24th as will we.  I have to try to get some sort of initial route selected before long.  We will go up through Nevada north from Las Vegas but no idea how we will get to Vegas yet.  We try to take a new route each time but we’re running out of options.  Once we get to Idaho there will be more choices to make.  With all the events that have been taking place lately, I have been out there with my camera documenting.  After processing the pictures, I have put them on a thumb drive and been downloading them onto neighbour's computers. 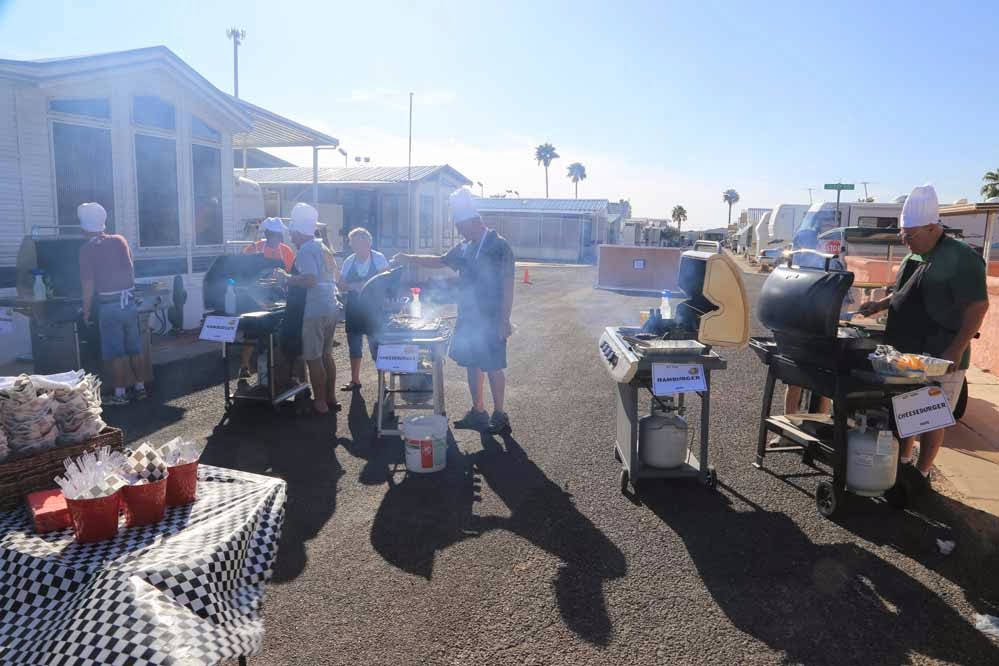 Five chefs in action at the block party 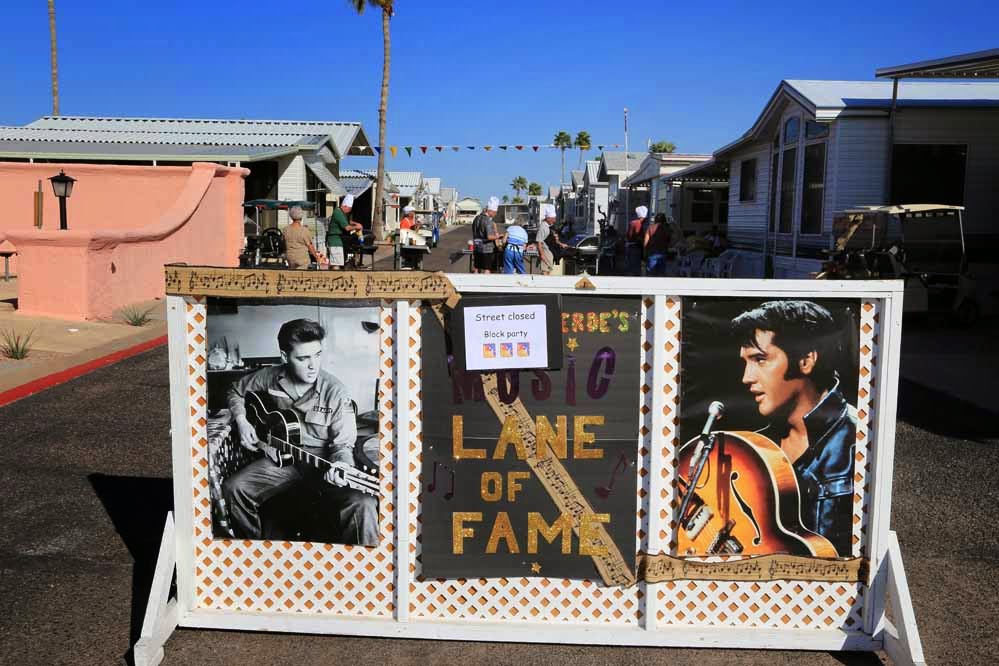 Our street was closed off for our block party 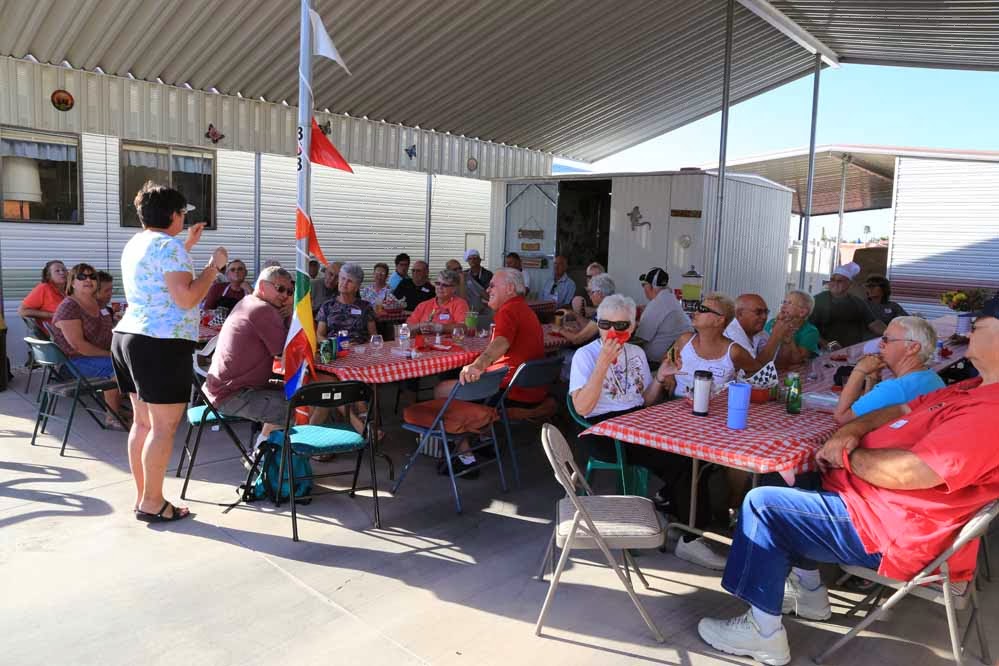 Some of our neighbours 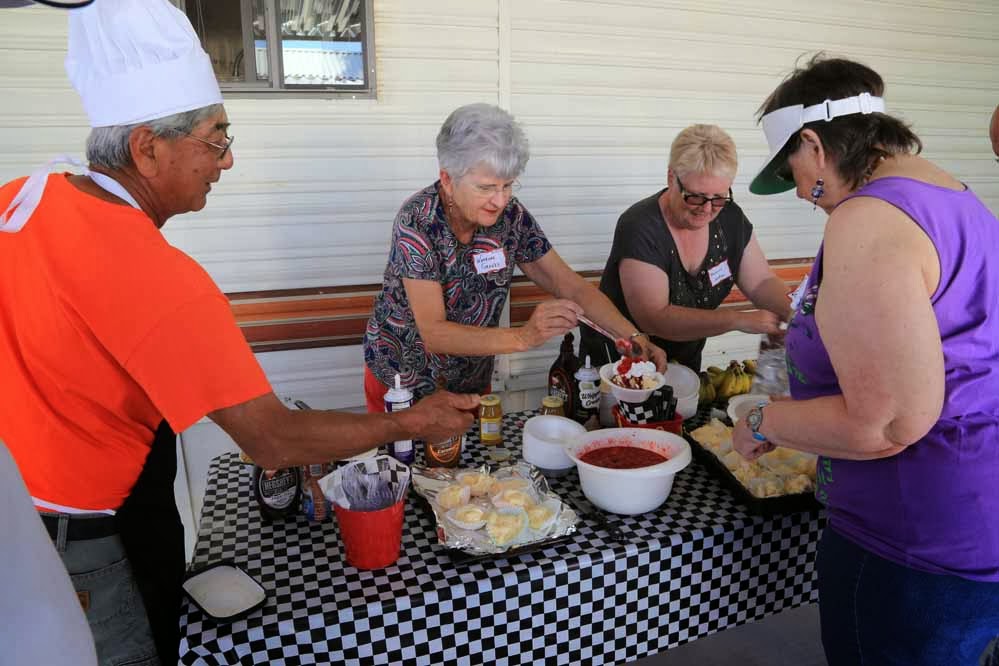 Dessert was from this nice little sundae bar


The theme for Spring Fling this year was music so lots of takeoffs were in evidence.  These girls were the Supremes. 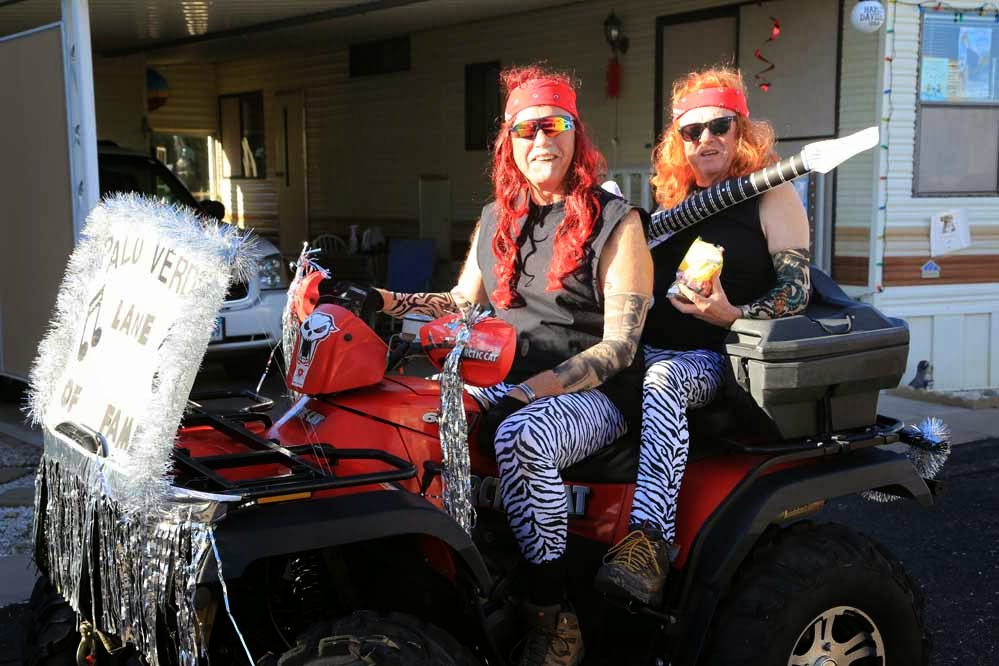 Bud and Norm went all out 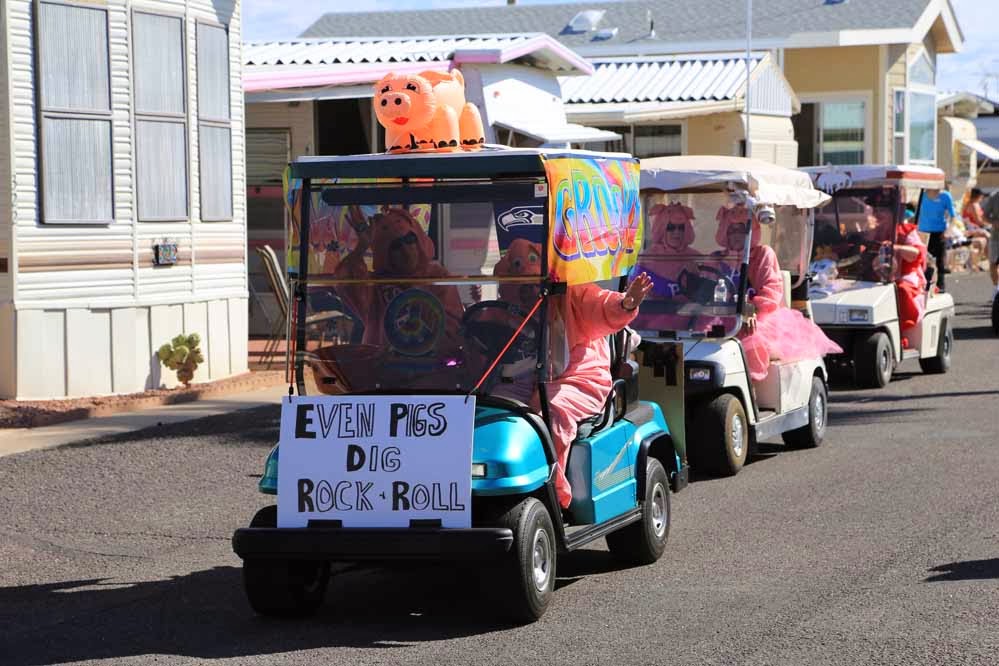 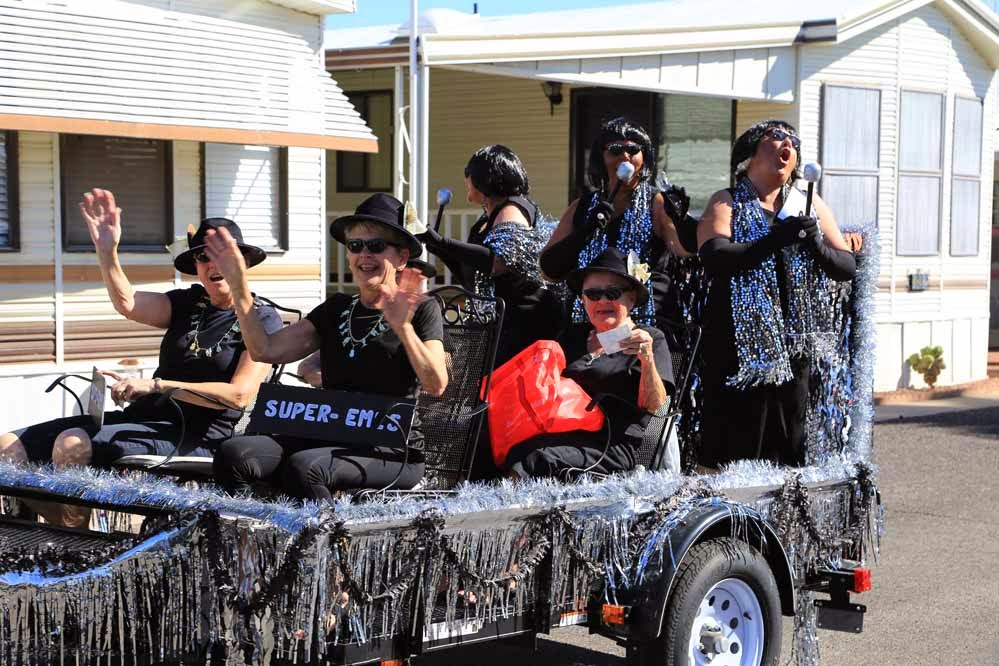 That is our ATV trailer under the decorations 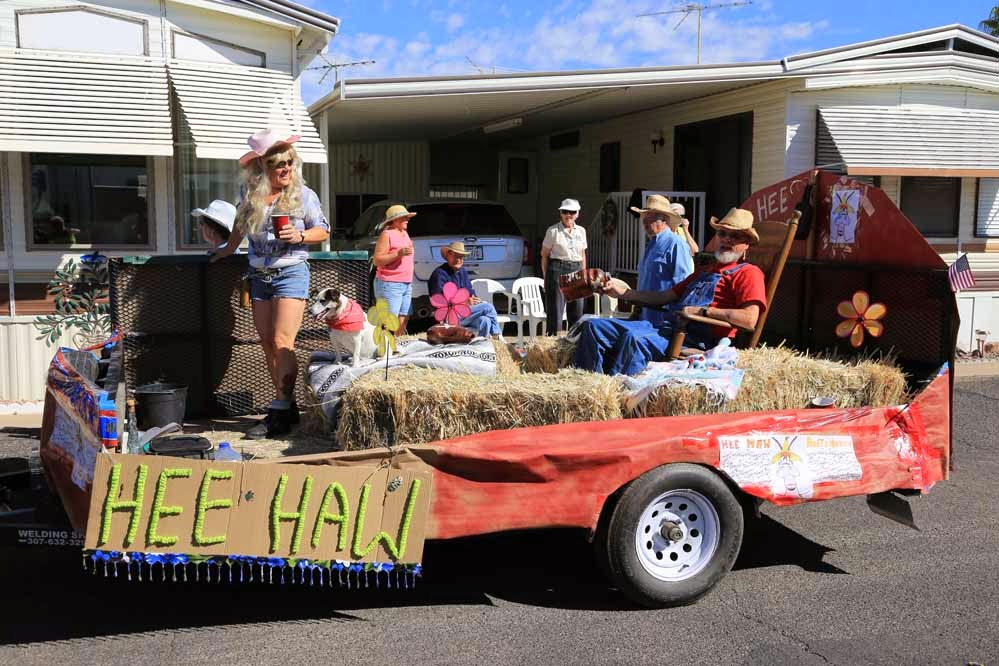 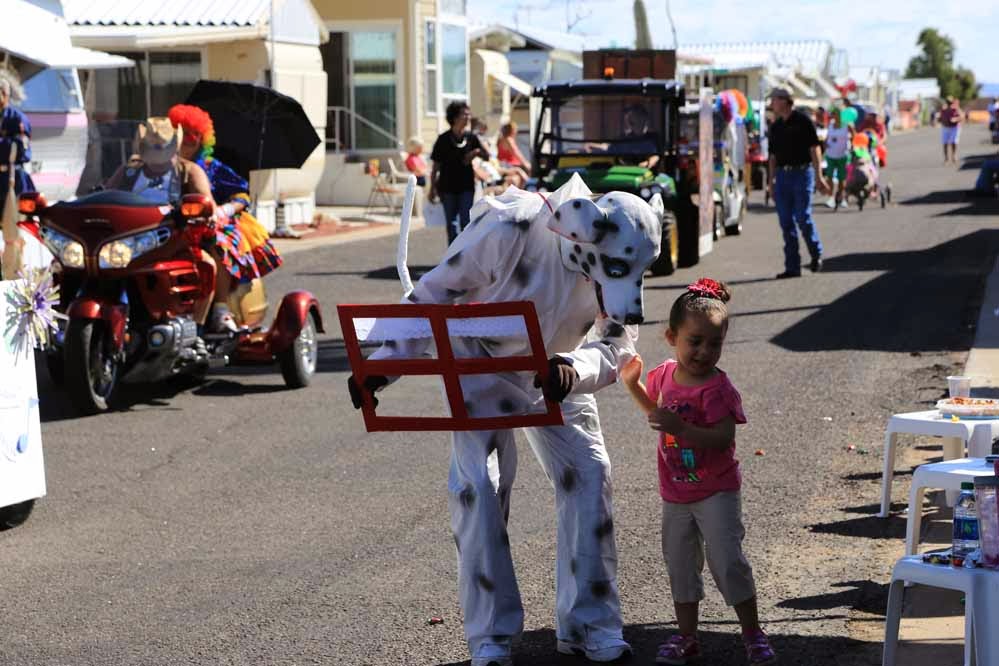 This was "How Much is That Doggie in the Window" 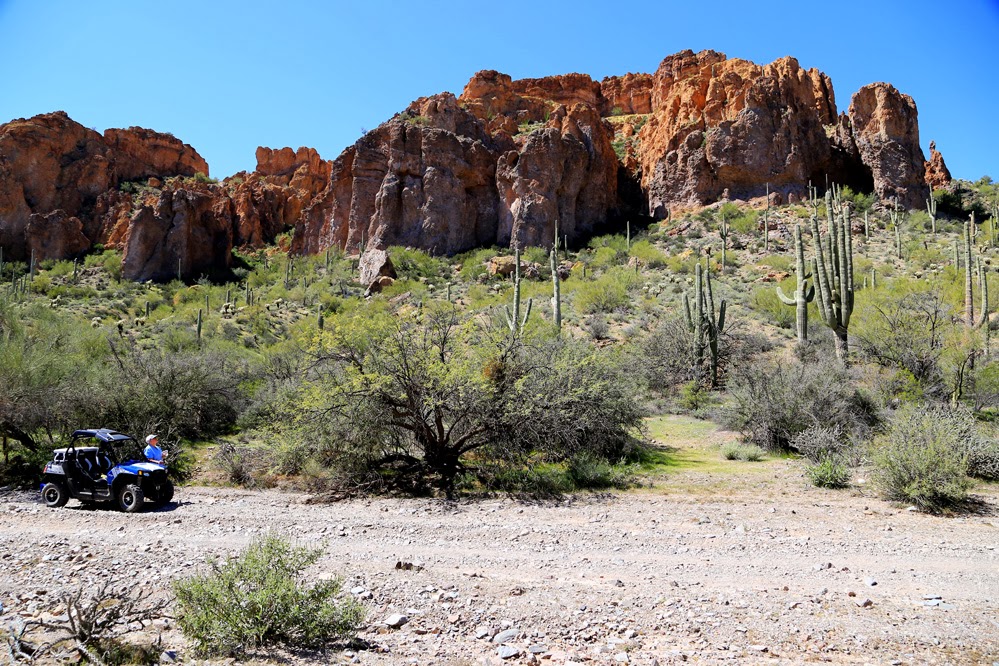 Where we had lunch yesterday 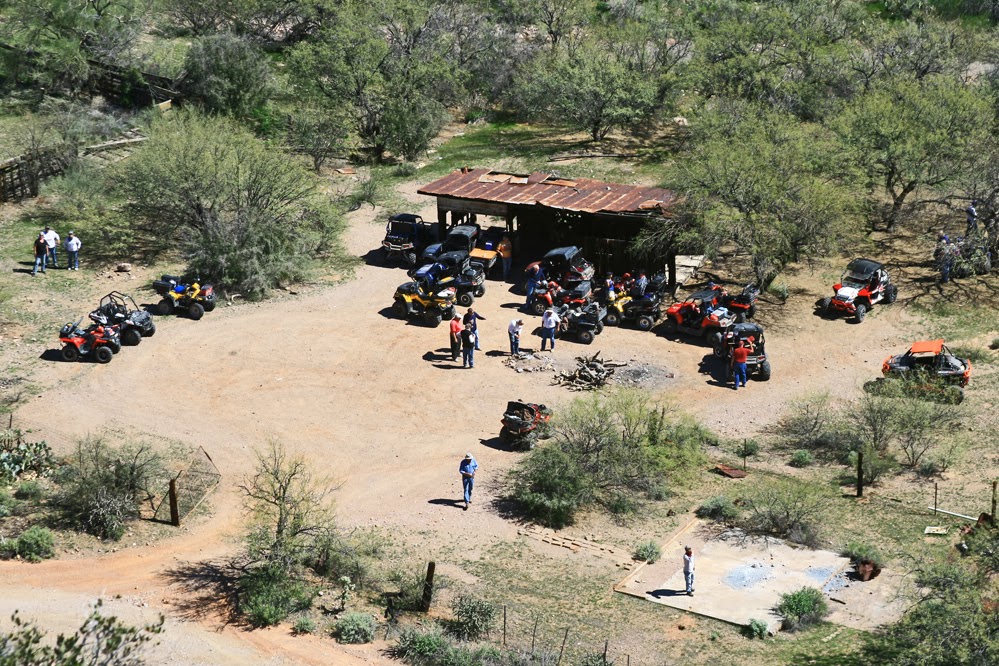 Lunch with the ATV club on Monday 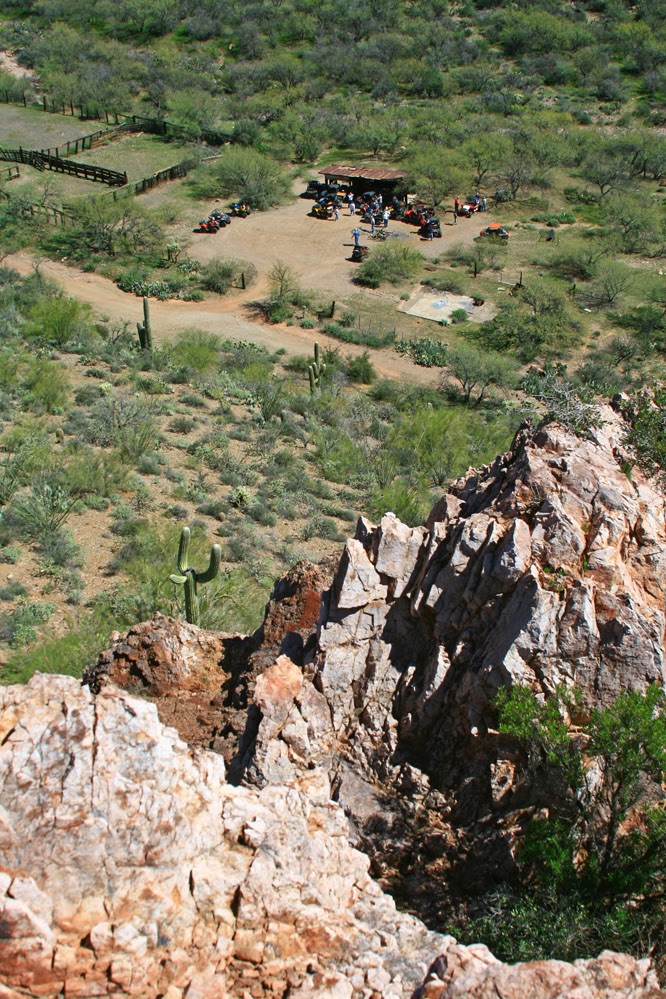 And showing some of my vantage point 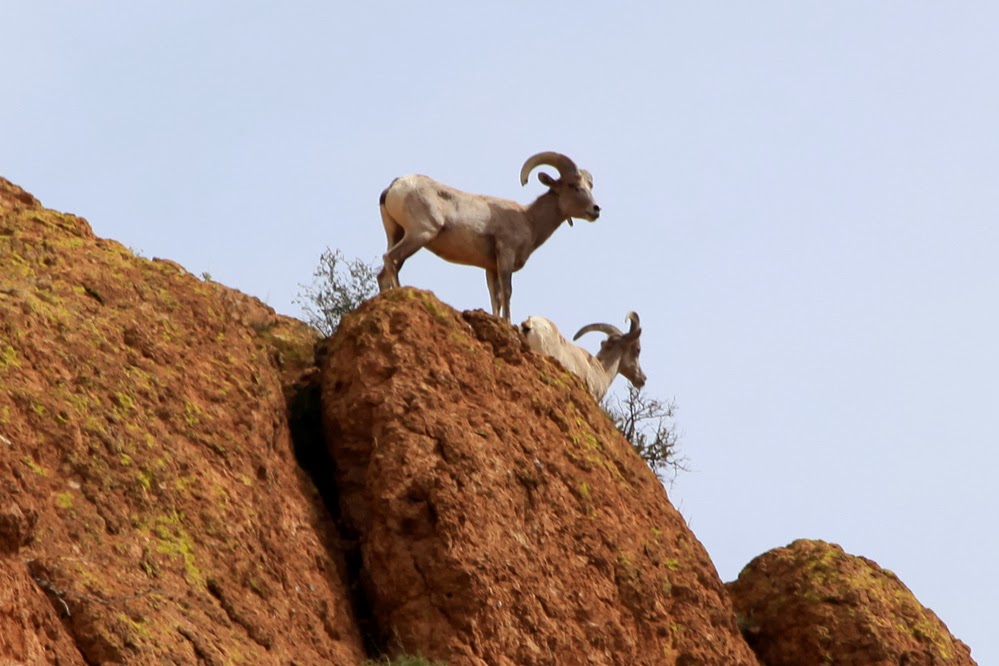 Desert bighorn sheep we saw in Box Canyon the other day 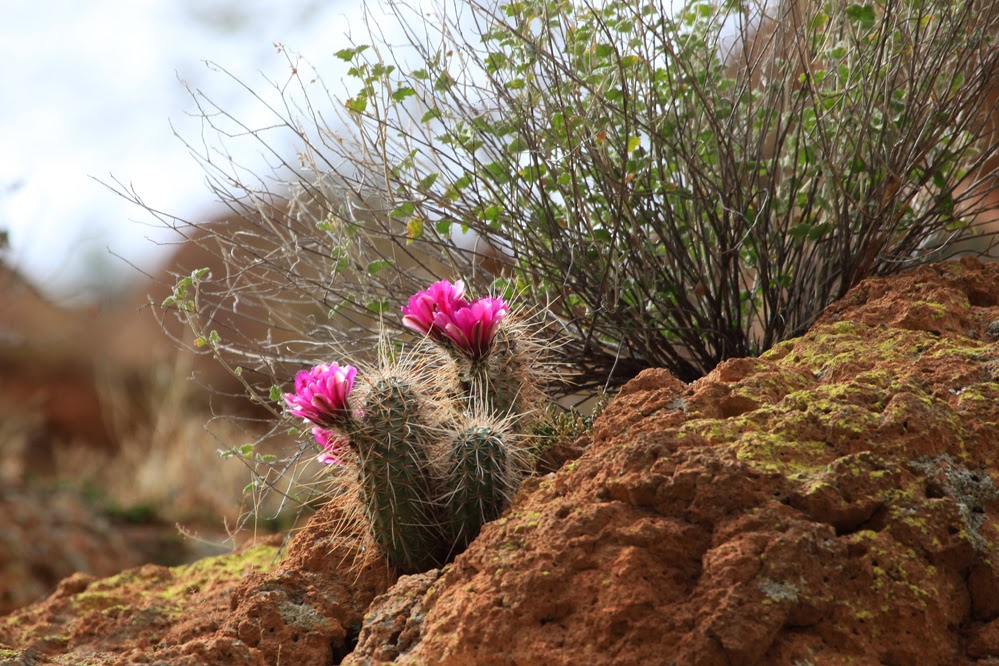 Hedgehog Cactus in Box Canyon the other day