We were on the road about 8:30 this morning and arrived at Wells around 2:30.  We filled up with gas before finding the Mtn Shadows RV Park.  Shortly after we arrived, the power went out in the whole town.  Aileen was napping with her CPAP machine running and was rudely awakened starving for air.  She finished her nap using the inverter for power.  Highways #93 and 318 were a real treat to drive as they were the smoothest roads of our whole trip so far.   I-40 from Williams to Kingman takes the prize for most continuous rough road surface.  It is pretty disgraceful for an interstate freeway.
The only downside to the 93 and 318 roads is the maniac drivers.  I had to jam on the brakes yesterday and hit the shoulder to let an idiot in a big diesel pickup towing a toy hauler trailer avoid smearing a little car coming toward us.  He had to have seen the car before he pulled out but just kept coming.  I kept watching in the mirror expecting him to pull back in.  Today, we had a transport truck with a 40 foot trailer do the same thing with a motor cycle coming toward us with his lights on.
I went for a walk around the town after supper and stopped at a grocery just down the road for a jug of milk.  As I was coming out of the store, I heard an owl hoot.  After looking around, I found him perched in the end of a large sign.  I went home for my camera and hurried back to find he was still waiting patiently.  It was fairly difficult to get a picture as I was hand holding my 400 mm lens.  Since it was nearly dark (7:11 pm) I pushed my ISO all the way to 6400 which allowed me to shoot at 1/25 sec resting against a chain link fence.
We plan to make it just over the Oregon border tomorrow. 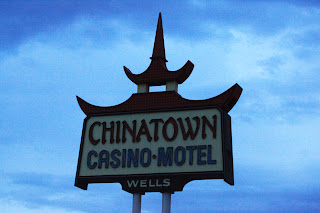 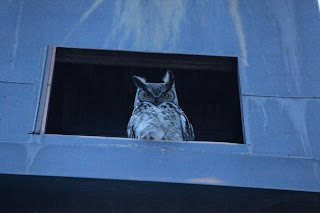 Posted by John and Aileen on the road at 8:26 PM