NO, THE RENO IS NOT COMPLETE

After several days making good progress on the flooring replacement, progress has slowed.  I picked up some type of bug that slowed me down for a couple days.  Then the piece of cement flooring I planned to use under the driver’s feet area turned out to be unsuitable according to the fact sheet I brought home from Lowes when I bought it.  I didn’t notice the comment about not using it with vinyl flooring until I studied the sheet more closely.  One of the managers at Lowes even called the factory for me Monday morning to double check.  So, we had to drive all the way back to Casa Grande to exchange it for a piece of plywood.  The flooring is all done except for three sheets under the steering wheel.  There will be a lot of fiddly fitting required with the steering column and various bolt heads and wires to work around.  Once the plywood is in place, I expect the vinyl will go down pretty easily.  Then it will be to get all the edges sealed, install the new toilet, replace the bathroom door and trim, reinstall the bed, the couch, the tub chairs and the front seats.  Oh yes, we do have to pull the slide in to make sure the flooring will not be damaged!
We took Jacquie and Jim with us to Mesa this morning when we went to pick up the new toilet at Camping World.  They had it delivered down from the Flagstaff store only to find they’d sent the wrong one.  After some tense moments and several what abouts, we managed to be able to go to a wholesaler and grab the correct toilet for the motor home.  We also stopped at a Home Depot for Jim to pick up more supplies for his project.
Jim and I played hookey yesterday and went on the ATV ride.  Way up at the very highest point on our ride, I was able to pick up a geocache.  Because of the remoteness, nearly all the cache finders have been in Jeeps.  One other one was ATVing and two were dirt bikers.  Only sixteen finders in five years and several were in groups where three claimed the find each time so there really hasn’t been much activity on this one.  The next cache from there is at the top of the Thumb which requires climbing gear so there is no way I will ever venture after it! 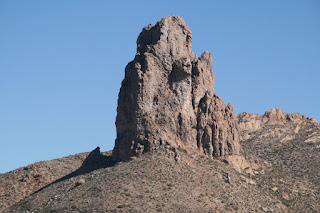 Somewhere on top of that monster is a geocache!

Our ATV club Christmas potluck was held Monday and Aileen cooked two gluten free turkeys for the meal then made lots of gravy.  We got to bring the leftovers home as they forgot to announce that people could help themselves.  Our favourite leader Ed, from Saskatchewan, has been president, organizer, treasurer and his wife set up and cook etc. for 15 years or more.  With declining health, he has finally decided to relinquish the whole thing so we now have a new president and four trip leaders who will share the duties.  Other people have stepped forward to do the work setting up for the meeting/potlucks every month.  I hope to continue sharing lead duties on the Tuesday rides but don’t plan on going on the new Monday rides.  When I’m here, I hope to go on most Thursday rides and perhaps will lead a smaller group if we have too many riders show up.  I’m now the only leader riding a regular ATV.  The other three all have side by sides and it is a bit of a concern that they may go to more areas not as suitable for regular ATVs especially for inexperienced riders.  Time will tell, I guess.  We just had one of our regular ATV riders tip his new machine over and in addition to the cost has missed several weeks of riding. 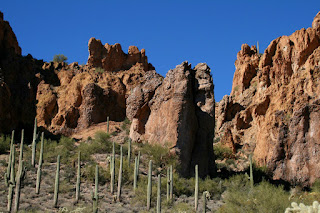 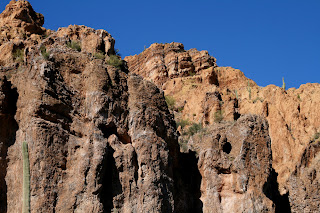 Here's a couple scenic shots taken on our ride yesterday.  These beautiful rocky ridges are along the Martinez Canyon Road.  I find them fascinating.
Posted by John and Aileen on the road at 7:37 PM