IN THE DESERT NEAR BOUSE, AZ 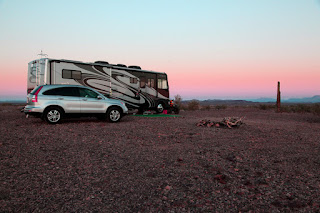 First night in the desert 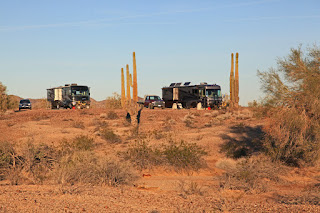 We uprooted our rigs Tuesday morning and made the trek over to Western Arizona.  We braved the Phoenix traffic and took Highway 60 then I-10 to get through the monster that is Phoenix.  One good thing about the freeway was there was no stopping the whole way through for us although in one spot the opposing traffic was at a standstill due to an accident and traffic was backed up quite a ways.  There weren’t any places to pull the motor homes off until the first rest area well west of Buckeye so it was a very welcome stop!
We are parked out in the desert in a free camping area two or three miles up Plomosa Road from the little town of Bouse.  We’re probably 25 miles from Quartzsite.  We all went into Quartzsite Wednesday morning as Jim wanted to get another solar panel for his motor home.  Solar panels have really come down in price in the last couple years.  I bought three mounting kits and lift arms for our three panels as down here in the winter raising the panels greatly increases the solar gain.  Jacquie and Jim’s son (my cousin) Jeff’s in laws, the Caouette’s, came out from near Quartzsite to play Sets Wednesday night.  Jacquie and Aileen took turns leading all night with me a sometimes close third but Jim went out in the last hand and caught all three of us with very full hands resulting in him winning by a wide margin.  Dian was in the hole.
Jim installed his panel Wednesday afternoon and we started on my kits Thursday afternoon when it warmed up a bit.  First off, I noticed our two main panels were only 64 watt.  I had been thinking they were much higher.   After thinking about it for a while, I called Solar Bill to see what he would offer for trade in value.  It wasn’t much but since the new panels were way less than we paid for the old ones, we decided to trade the two 64’s in on two 120’s.  We are certainly getting a lot higher charge rate but something is still wrong in the system because we can’t seem to hold the charge.  By evening the batteries are already quite low and we haven’t had anything on to use the power.  We’ll have to get the batteries tested when we get over to Quartzsite after New Year’s.  It seems we’ll be buying a new water pump as ours is burping when no water is being used which is annoying.
Jim and I took the ATVs for a run Friday afternoon.  There are a lot of really neat trails in this area.   We picked up one geocache.  I went out by myself yesterday afternoon and found three caches.  One was a corral I didn’t know was there.  The second was up a canyon which had a bighorn sheep on guard.  It let me walk around and take pictures unconcerned, but when I went to head off up the canyon toward the cache, she panicked.   She bolted across in front of me and went zipping up the canyon, up the rock wall and over the top to disappear.  I guess I was cutting off her planned escape route?
The third cache was called Crab Claw and you’ll see why by the pictures.  It was a little out of my comfort zone climbing up and around cliffs like that but there turned out to be a pretty safe route that had all solid good traction rock rather than sections of loose rock on top of solid which is a recipe for disaster.  It was really neat when I finally got into the actual claw.
Today is sunny.  We had some clouds the past couple days with clear mornings to give us frost before turning cloudy.  It was a heavier frost this morning and only 6.9C inside the motor home.  Brrrr!  We could see our breaths inside.  Aileen said she could even see Mitzy’s.  We ran the generator for a little while til the solar was strong enough so we could use the furnace which is a real pig on power consumption.
I mentioned in the last post about buying the Wilson Trucker Antenna.  I tried using the Wilson Sleek with the little antenna that came with it and we could barely get a useable 3G signal just part of the time.  After mounting the trucker antenna on the roof ladder, we have excellent 4G.  Very impressive and well worth the money, in my opinion.  It was about $55 including the adapter and mount. 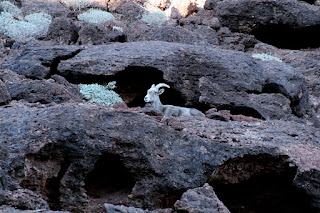 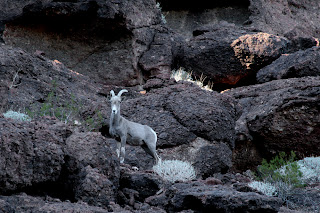 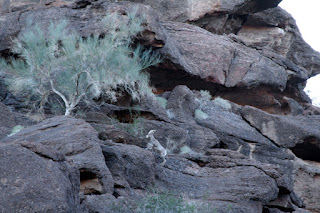 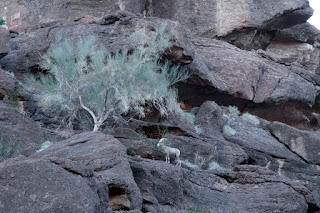 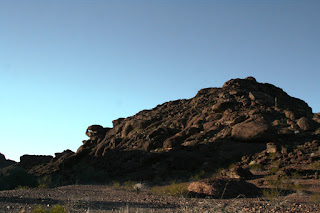 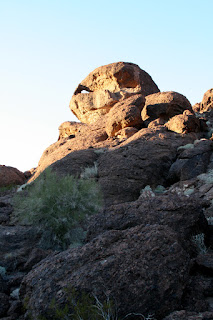 Closer to the claw 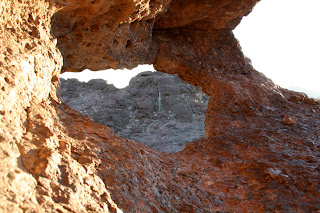 Inside the claw, the cache was just through the opening 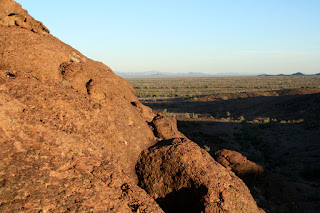