Well it’s certainly major to me!  We decided to get off our butts and finally replace all the carpet in the motor home which we’ve been discussing almost since buying the unit.  Jacquie and Jim deciding to do theirs spurred us on.  The four of us went to Mesa the other day and shopped Home Depot and Lowe’s.  Since Home Depot had the only selection, that’s where bought.  We both bought vinyl Allure but radically different finishes.  With the four of us and the back of the car piled high with flooring, the CRV was sagging a little.  We went to Harbor Freight so Jim could buy a set of ATV ramps.  He has a flat deck truck he’s towing behind his motor home so now we can take both ATVs on our travels.  Aileen and Jacquie checked out the Big Lots store next to Harbor Freight but Jacquie was the only one buying.
Jim and I both went ATVing on Tuesday.  I was leader again and we had a nice little group of eight.  I was able to stop for a geocache, leaving the group resting in a cute little side canyon off Box Canyon.  Jim and I hiked off up the gully and Jim finally made the find.  I didn’t ride today as there is still lots of work to finish off the flooring project.  I haven’t even downloaded my photos from Tuesday’s ride with working on the project.  I usually have them downloaded and emailed off before supper on ride days.
Jim and I are sharing a single pair of tin snips which work well for trimming the spots where you have to fit the flooring around things.  Good thing we’re retired and not on too much of a deadline.  It is really convenient having the park model to move in so we’re not working around our living quarters.   Aileen has wanted to upgrade to a china toilet in the motor home so I thought this is a good time to do it as I will remove the existing toilet to do the bathroom floor.  I was going to leave the bathroom but as I got the new flooring closer, it didn’t make sense.  It just looked shabbier.  Jim has been giving me pointers and came and got me started the first day.  We’ve been assisting each other with the heavy lifting of seats and chairs.
Aileen overdid it the first day and paid a dear price the next couple of days.  She is nearly back to normal again now, thankfully.  I had her on the end of a wrench attempting to remove the bolts holding the passenger seat in place.  The bolts went through the floor and had both rust and undercoating on them.  I sprayed them well with WD-40 and then got Jim to help with the rest.  Aileen spent hours pulling staples from under the carpet.  There were several thousand, I’m sure.  I did many hours on the staples as well.   The project is going quite well and I’m over halfway, I think.
Next Monday is the ATV club Christmas get together and Aileen is cooking two turkeys for it then making lots of gravy.  After we get our flooring projects completed, Jacquie and Jim and us plan to wander off for two or three weeks.  We want to be somewhere quiet for Christmas and we have a turkey to cook wherever we are using our electric roaster and the little Honda generator.  We’ll perhaps get to ATV on some new trails too. 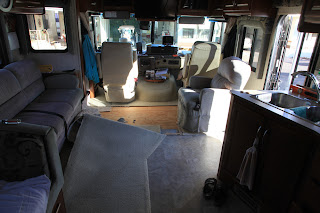 Starting to tear out the carpet.  Furniture still in place 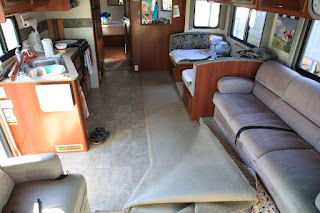 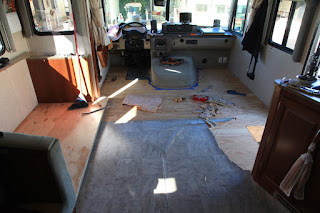 Look at all that lino that was under the carpet.  Unfortunately, it had many cuts and gouges in it and it was of very low quality.  The sub floor was nicely sanded plywood and excellent quality.  Furniture is out now 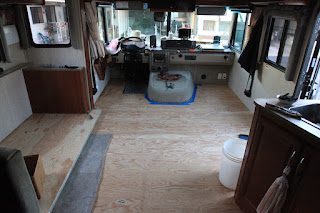 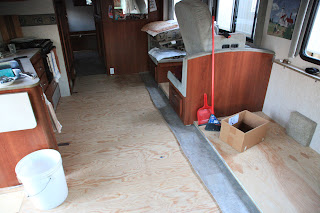 Posted by John and Aileen on the road at 7:18 PM