SETTLED IN AGAIN AT CLUXEWE

With Aileen’s sister Anne having the weekend off, she has been out at the campsite with us so the girls have been catching up on visiting.  We were playing Mexican Train last night when Aileen spotted a nice sunset happening.  I abandoned the game for a little while and ran out along the beach with my camera.  I had the 100-400 mm lens on so that’s what I used.  Aileen stole a win from Anne in the last set while I was in my usual spot well out of the running.  We’d played SkipBo earlier with one win each, I think.
I happened to look out the window after breakfast this morning and spotted a mature bald eagle out in the water struggling with something.  He managed to swim to shore as he couldn’t get airborne from the water.  We weren’t able to identify exactly what he had caught and it was much too far for even my 400 mm lens to capture sharply.
Later, I rode my bicycle out along and across the highway where I found some nice reflections in a beaver pond so I happily shot another stack of pictures.  I put some of the reflection images into a digital slide show with music.  After lunch, I showed my recent shows to Aileen and Anne using our new 32” TV.  We have had a wide variety of weather so far which is fairly normal for this part of the world.  Some sun, some wind and some rain.  Sometimes separately and sometimes all together. 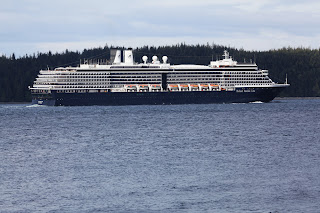 Our first cruise ship this year

Posted by John and Aileen on the road at 6:35 PM