ATVING IN THE SNOW

Right after my last post, John and I went to Telegraph Cove where we found the Blinkhorn Trail that John heard about the night before at a campfire they went to after we came home.  It turned out to be rather a brutal 4 kms each way.  There was lots of elevation change and much of it was mostly up without the benefit of using contours. There were six or eight spots with assist ropes to help you up and down the steeper spots. We took a side trip to a viewpoint about 2/5 of the way in.  We had a sandwich while there and enjoyed the hammock that someone installed.  A college age girl from North Vancouver working at the kayak shop, came zipping up while we were there so chatted with her a while.  I waded across the big creek at the spit on the way out and it was quite chilly.  I hopped across on rocks on the return and found my supposedly water proof Obos aren’t!  I barely covered the left toe and got wet toes.  We went right out to the navigation light at the end of the trail and there were lots of chocolate lilies growing on the rocks.  We were treated to a couple of dolphins playing just before we left.  We saw a marten on the spit on the way back but it was too fleeting for getting a picture.
We ran into a group of 5 hikers just coming down from the viewpoint and another college looking girl headed up just as we got to the junction of the trail, the only others we saw.  We old guys, suffering as we were, still managed to leave the younger ones in our dust heading down.  John found a kayaker’s geocache near the spit and another at the Telegraph Cove mailboxes.  We made it home about six and we cleaned up all the food the girls had prepared for supper.  Anne had put two pounds of ground venison into a meatloaf and we ate it all.  After supper I whined enough that we got to go to Foster’s hot tub.  Aileen had a tub bath in the house.  She got caught up a bit on her emails too as we took her computer with us.
On Friday, John and I went ATVing up Kinman Road after lunch.  We ran into quite a bit of snow at a surprising low elevation.  We had fun powering our way through until we ran into too much.  We had to pull each other loose once.  The weather was fairly nice and the road was dusty in places.  Supper of crab and salad then John and I went down to watch the ship being loaded with gravel and sand just along the beach a mile or so.  It will probably end up in LA or San Francisco or maybe somewhere else down the US west coast.  Dennis, April and kids were at John and Anne’s trailer when we returned so we all visited around the campfire.
I was awake at 5 Saturday morning but managed to doze til nearly 6:30.  I got up and at ‘em and walked over to Foster’s before 8.  John and I went up the bush road to Elephant Mtn down near Beaver Cove.  There was surprisingly little winter damage that required sawing.  There was one ten inch alder than John axed out and several small ones he dispatched with his little saw.  We broke off quite a few salmon berry branches but that was it.  We explored around up top but the views weren’t that great because of fog.  We decided to return via the bush road since it was more interesting than the boring logging main road.
We met Dennis at the mouth of the Nimpkish and went geocaching, finding four of the five listed in that area.  There were several people crabbing at the low tide.   We came back to John and Anne’s for a beer and rest then I brought John’s truck home as he was going to wash the Jeep, cut lawn and watch the hockey game during supper.  I unhooked my ATV trailer and unpacked my stuff out of John’s truck.  I was just finishing up a snack since it was now three pm and I last ate about ten, when my cousins Christine and Donna drove in.  They had been quilting.  We chatted awhile, then since they were interested in Colorado, I showed them my last Colorado show.
I read til just after midnight last night.  Aileen had put her book down earlier.  The yahoos next door were still whooping and hollering so next thing I know, Aileen is outside in her nightie reaming them out.   They did quiet down some but not completely.  We were glad to see them pull out this morning!  We had a gorgeous day yesterday but we awoke to rain this morning.  The planned ATV outing didn’t happen today.  Aileen went to help Anne plant some flowers on the bank behind their RV site which they park in most of the year.  John went home to town to work on some projects while Mitzy and I stayed home to put this blog together for posting next time I get to a stronger internet signal.  We have no signal in our site this morning.  I was able to get on with a very faint signal last night but not for long. 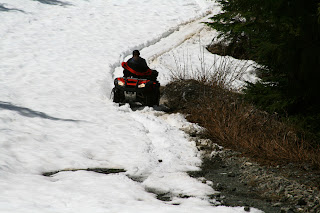 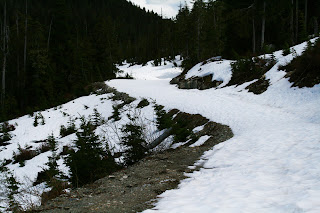 This stopped us though 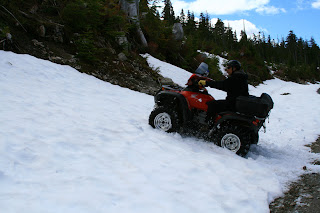 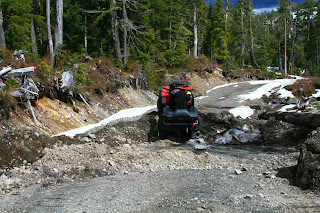 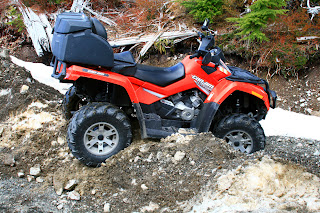 I tried to go around and got hung up.  After digging out underneath, John had to tug me out 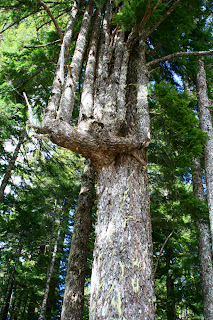 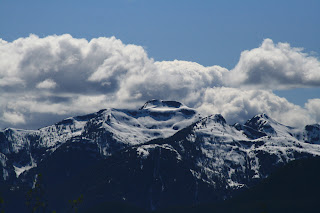 Lots of snow in the mountains still 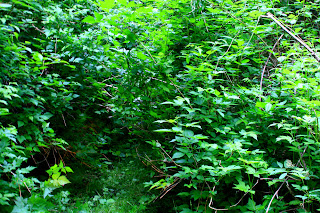 On the old abandoned road up Elephant Mtn, John disappeared into that 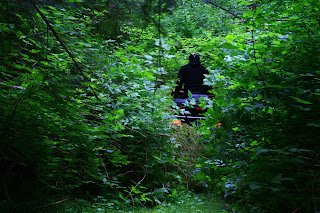 Oh, there he is 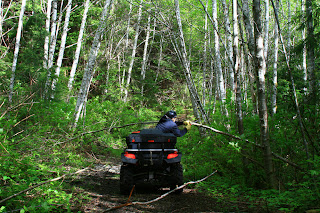 Cutting off one of the many small windfalls 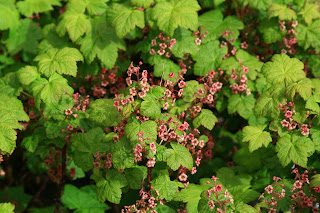 Wild Gooseberries, I think, up on top of Elephant Mtn 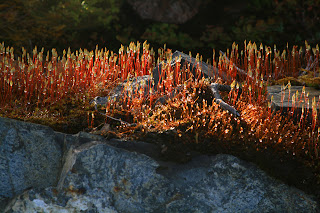 Blooming Moss up on top of a rock cut.  The water drops are from the dense fog that just cleared and the sun is shining through from behind (known as backlighting) 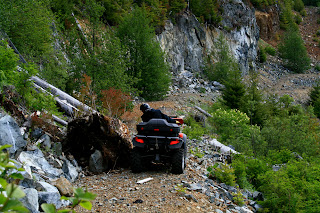 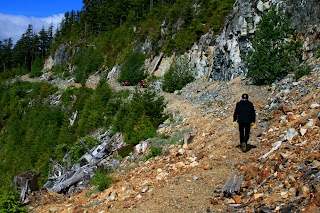 Posted by John and Aileen on the road at 2:12 PM