SOME BUMPS IN THE ROAD 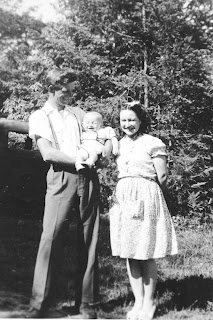 May 3 would have been my parents 66th wedding anniversary.  This picture is probably pretty close to their first anniversary and they were already stuck with me.  They went on to have seven more children!  We lost Dad in December 2010.  Mom is in a care home 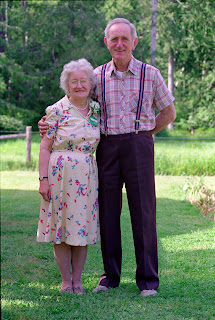 This has been a frustrating week.  I had gotten our 2007 Chev pickup back on the road, licenced and insured etc. as I had advertised it on Craig’s list hoping to sell it.  The only calls we’ve received so far are from the regular scam artists.  After initially charging the truck battery, it started fine and ran well the second day as well.  After leaving it parked for about four days, the battery was dead again.  I charged it again but it wouldn’t take a charge.  Okay, I then took the truck into Canadian Tire where the battery came from for them to test it.  Oops, battery is no good.  Well, the battery still has 11 ½ months left on free replacement, so that’s good.  Next thing I know they have installed a new battery - $37 please.  Hey, I could have done that in five minutes!  Oh, well.  I go to leave and gee, the battery doesn’t sound very peppy.  I drive 25 minutes back to the motor home and the battery is worse.  Okay, put it on the charger overnight.  Next morning, dead battery!  This morning I took the battery back to Canadian Tire and have them test it.  Hey, the battery is no good!  They give me another one and the service writer makes sure it is from a different batch.  I tell him I’m not taking it until you actually test it and show me it is a good one this time.  It is so I get it home and install it and it sounds normal finally.  Then there is the matter of the dash message stating the four wheel drive needs service.  I guess it does as I find there is no four wheel drive working.  We took it to my cousin Jeff who runs an automotive repair facility and hope he can find the problem without a huge bill.
Aileen was in to see her regular doctor today and most things checked out fine.  She does have to go back on May 10 to have a thingy removed from her nose.  We hadn’t planned on returning to Salmon Arm til next April and here we are coming back in a week after we leave Thursday.
We house sat for Bev and Kevin Saturday night while they went on a mini vacation somewhere.  It was a bit of a change with Mitzy and three grand dogs and two grand cats.  We did make use of the facilities.  Aileen had a nice tub bath and I used the hot tub.  Felt so good!   I so enjoy the hot tub down in the park in Arizona that it’s great to get to use one along the way.  Aileen has had lunch with two of her friends and will get together with the first one again tomorrow for coffee.  I had intended going to the local camera club on Monday but forgot til several days later.  Old timers, I guess!
I am still struggling to find where the water is getting into the motor home.  I know where it is showing on the floor at the rear wall but can’t isolate where it enters.  I have sealed up all sorts of places and just when I think I’ve finally fixed it, water appears.  We had a real heavy rain for hours the other day and the floor was soaked.  The next day I totally disassembled the bed checking for further damage but it only went under the bed as far as there was carpet to wick it.  I removed that carpet.  I reinforced part of the framework that holds the bed platform.  That was a piece of shoddy work.  Those people who build motor homes don’t clean up their debris when they’re finished either.  I vacuumed up quite a bit of junk from under the bed after picking up the larger pieces.
Oh yes, we also had our taxes done and once again had to pay more. 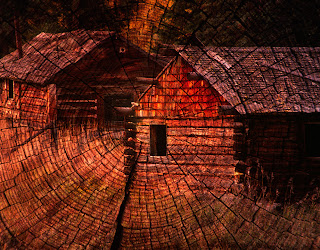 This image dates back far before digital to my darkroom days.  This is called a slide sandwich.  I took a picture of the two cabins then later a picture of the end of a log and put both slides into one slide mount.  I'm sure it is something that could be done easily in Photoshop but I haven't tried it.