CATCHING UP IN SALMON ARM

We are keeping fairly busy here with various things.  Aileen had lunch with her friend Edna one day.  She was to the lab Thursday morning early for her yearly blood work and it took an hour and a half or longer.  Most of the early people, including her, had to fast before giving blood so it gets a little tense around there with people being hungry and their blood sugar getting out of whack.  The staff said it was a three hour wait the day before.
Aileen cooked supper at Bev’s on Sunday as Bev celebrated the Big 40.  We had some salmon that niece Shaunee had given us and it was very tasty.  Bev gave Mitzy a much needed grooming today on her day off.  We gave up on cheap vacuums and bought a Miele the other day and it sure seems to work well.  It is small enough to fit in the same closet the small ones did and it is very quiet compared to them as well.
I put a licence on our 2007 Chev 2500HD pickup and have it advertised on Craig’s List.  It took lots of elbow grease to get it cleaned up after sitting out for the winter.  Jim had fallen a couple trees which I had to cut up before I could get the truck out from behind the shop.  The only other way would have been to move the motor home and that seemed like lots of work.  Jim and Jacquie started a fire so we got all the debris burned up.  While I was manning the chainsaw, I started trimming the corkscrew willow.  Jim got more relaxed as we went along and we finally took it down to a bunch of stubs.  Jacquie’s idea was to take it down to table height and put a top on it!
I have ridden my bike around the White Lake valley a couple times to the tune of much puffing and my legs feeling like jelly.  It’s a little different riding with hills instead of the mostly flat parks I’m used to down south.  We’ve been up in the high teens and low twentys Celsius the past few days which is great.      I have only taken some shots of the truck for the ad since getting my camera back from repairs.  It is the in between time right now.  The spring foliage isn't quite photogenic and everything is still blah from the winter.  Pretty soon I will get motivated again and get out shooting. 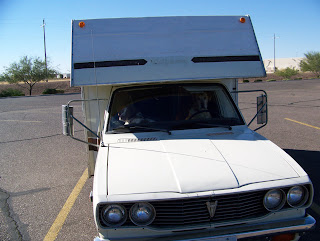 Camping has gone to the dogs!
This is a picture I shot over well over a year ago and just got around to downloading from the little Kodak camera that lives in the glove box of the car. 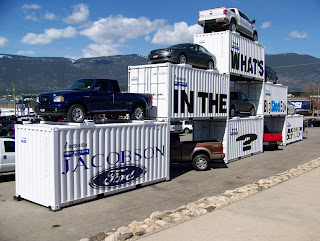 Another found Kodak shot from about this time last year.  The local Ford dealer had a promotion on 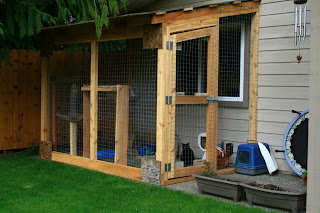 This is the "cat house" my brother Charlie built for for his tenants.  They have three cats which was a bit much in the small house.  The cats took to using the cat door to get out and spend much of their time outside and safe.