AND THE DOMINOS ALL FELL DOWN

Well not quite, maybe. We had a call from our realtor mid afternoon yesterday saying the deal on our buyer’s property has collapsed as the buyer, who had a $100,000 deposit, was unable to get financing. She is a self employed lawyer who has been bouncing back and forth from Salmon Arm to and hadn’t spent much time working the past year. Because of that, she was unable to come up with sufficient earnings to satisfy the new bank mortgage requirements.Therefore, our deal is either dead or delayed. We received an addendum to the contract extending the dates by a month but including a 48 hour stipulation if we get another offer. The realtors will continue showing our house as often as possible. I copied it to the thumb drive and we took it in to Anne’s to print it off. We had Anne witness our signatures then scanned and emailed the papers back to Salmon Arm. This was a bit of a disappointment as we were starting to think the deal was going through. Our prospective buyer is still very interested and is continuing with his commitments regarding removing all subject to’s by June 15. They are having the home inspection performed tomorrow at their expense.

We ate inside last night as it was too windy and raw outside. When we got back from walking out to the point, the wind had died and the no-see-ums were a pest when we sat around the fire. We all headed in at 9:45 tonight. We have yet to hear John and Anne leave in the morning. The weather while not sunny today, has been mild and bright.

We bought gas and groceries when we went to town this morning. We should be good for a few more days. We have the next three days looking wet while down is forecast to have some really nice weather. I guess we’ll take what is given.

I was sitting outside reading about 4 PM yesterday when all of a sudden I heard Earl next door holler “John, cruise ship!” I quickly grabbed both cameras and ran to the beach and was barely in time to grab a few shots. The ship was fairly close in as the channel isn’t all that wide between us and , where the lighthouse is. However, when so close they don’t stay around very long even though they slow down from cruising speed. This was one of the smaller ships we have seen go past.

Speaking of ships, the freighter we saw the other day was heading to with his load of gravel. Google CSL Acadian and you get some details on the freighter. Orca Sand and Gravel has contracts in , and . They have an interesting website if you Google them.

Before we left , we gave the San Carlos Indian Band, who supplies our hydro, sufficient money to cover our bills through the summer months until we return in November. We had to give them a $100 deposit when we originally signed up which was refundable after one year.Well, they sent the deposit back but also the rest of the credit I had with them. So now I have to get more money to them before they cut us off and charge a hefty reconnect fee. Grrrrrrr! They are something else to deal with. 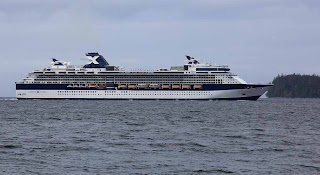 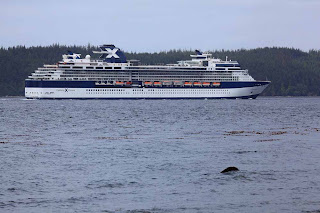 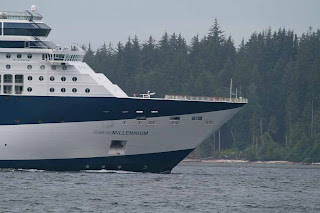 The Celebrity Millennium cruising back from Alaska