THE TURTLES PICK UP THE PACE! 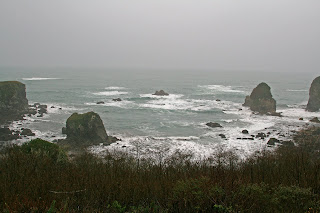 The view from our campsite this morning at Harris Beach 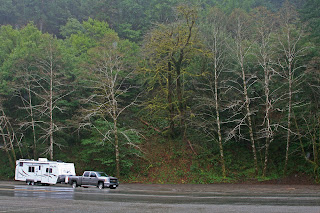 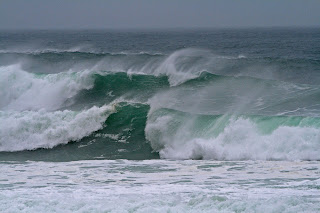 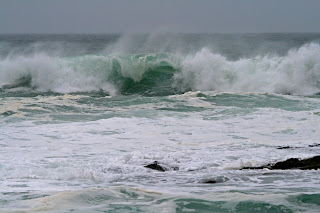 The above two are from our afternoon rest stop
Yes, can you believe it? We had our biggest day yet putting 411 kms under our wheels today. We woke to rain, we drove in rain and we are parked in rain. We hit the road before 8:45 and checked into Cape Kiwanda RV Park at 3:41. Some of the day we had the wipers on high, only briefly were they off at all. Aileen decided we may as well drive since it was so wet and the forecast is the same all week and we can’t wait it out.
We were saddened to hear of Aileen’s cousin Gloria passing away yesterday. We will be on Vancouver Island at the time of her memorial so will at least be able to attend. We’d made a rush trip from Salmon Arm to Campbell River last summer in order to attend Bill and Gloria’s 50th anniversary which was held after the fact due to her cancer treatments.
I forgot to mention yesterday that we’d seen a couple large groups of Roosevelt Elk in northern California. They claim to have the largest herd in North America. I thought they looked pretty small to be Roosevelt.
We have an indoor heated pool and hot tub here and plan to make use of them later. We’ve been suffering withdrawal since leaving Caliente where the pool was a nightly ritual. I didn’t unhook the truck from the trailer so we’ll have to walk all the way to the pool in the rain.
Aileen has been having some luck training the cat to use the litter box on command. Some times she chases her around the trailer for a while to get her in the mood. Other times she puts her in the litter box and Sophie does what’s required.

Posted by John and Aileen on the road at 5:47 PM