CAMPBELL RIVER AND BACK TO PARKSVILLE 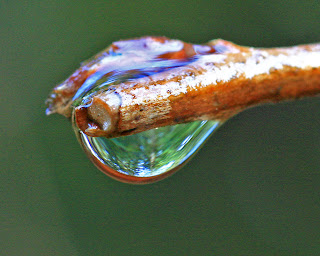 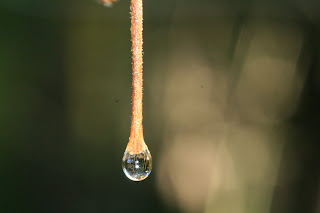 The original image of a dewdrop 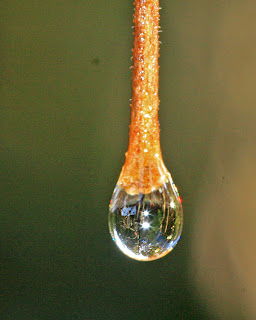 Image enlarged, tuned up and sharpened 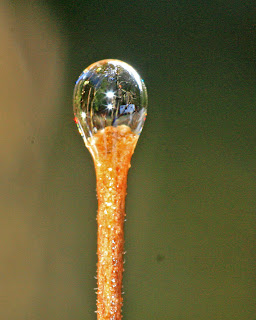 Same image rotated so trailer is right way up
The larger image in the section below my blog text is the same image but zoomed tighter
Scroll down
March 10, 2009
Well it’s been more than a few days without internet, I guess. We moved on up to Campbell River on March 6th and parked in Bill Van Bergen’s driveway for 4 nights. We attended his wife Gloria’s memorial on Saturday the 7th. There was a full chapel and Aileen was one of several people who shared memories of her cousin with the gathering. The memorial was well done with many of Gloria’s creations and lots of pictures on display. Another highlight was a digital presentation on a large screen TV that ran constantly during the reception. We enjoyed getting to know more of Bill and Gloria’s family and friends but wish it was under better circumstances. We had several group meals at Bill’s house where lots more memories were shared.
On Monday the 9th, Aileen and I drove down to Cumberland to visit our long time friends from Turtle Valley days, Perry and Lynda Jessop. We had a great visit and are invited for supper before we leave the Island.
Upon leaving Bill’s we were headed back to the lower Island but only got as far as Miracle Beach. Aileen and the girls had a 2+ hour nap while I went to Courtenay and finally found the part I needed to repair the bottom drawer in the kitchen. I’ve been checking RV and hardware stores all the way from California without success and the store here had a whole bunch of them. I also filled a propane cylinder and gassed the truck. Fixed the drawer when I returned which made Aileen happy – the contents of the drawer have been sitting in a bag beside her at the table for a couple weeks.
I finally made contact with my Telus rep in Salmon Arm and she had a new air card waiting for us. Our daughter Bev was a great help by picking it up and couriering it to Parksville for us to pick up. The story is that our other one was defective and they have replaced it with a new one. She is still telling us it should work in the US so I guess we’ll have to wait until September to see if that is true. We are really looking forward to dependable internet all the time!
March 11
We had a nice visit with Aileen’s sister Pat and husband Jim last night at Salmon Point Pub which was just ten minutes up the road from the campground. On the road again this morning heading for Parksville where we’ll probably hang out for a week or two. We had lunch beside the ocean at Union Bay then just a little south at Union Bay, I spotted sea lions. There were quite a number of photographers and other spectators. I met a couple of ladies from the Comox Valley photo club who were also blasting away. I think I took 324 shots as my share – love this digital! I deleted lots later but who cares?
We set up at Rathtrevor Beach Park for the night. We went looking for the UPS Store in Parksville as that was where our air card was to be sent but found it had closed last year. While waiting in the truck, Aileen saw Wendy and Randy drive by in their new to them motor home, so we went to their place for a tour of it. After supper we went and visited my brother Charlie and wife Sheila.
March 12
We moved the trailer up to Charlie’s this morning and set up beside the house. We were able to get internet from the router in the house so was able to track where the air card package got to. After lunch, we went to UPS in Nanaimo where our air card had been rerouted. We picked up a few groceries on the way home. I went to Deep Bay with Chas later and after shooting some eagles saw some of Chas’ current construction projects. When I went to take Mitzy’s collar off at bedtime, it was gone. I took the flashlight looking where she and Chas’ dog had been rough horsing but couldn’t find it.
Mar 13
Only 40F in the trailer this morning so it was jump out of bed, turn the furnace on and back under the covers again. After breakfast I went and found Mitzy’s collar. Since this was the second or third time it had come apart, Aileen put it in the garbage after removing the tag. Sheila took my sister Susan to catch the ferry to Vancouver this morning. Sue is heading to New Zealand tomorrow to meet up with her husband John who has been working down there framing a house, for a couple of months. Aileen gave me a haircut this morning so I’m all pretty again.