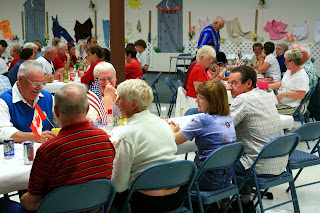 At the Canada supper 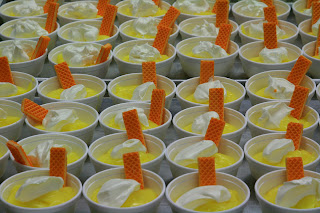 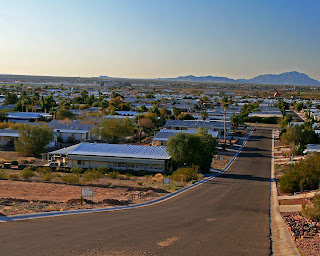 Florence Gardens, our sister park in front, Caliente in centre and Town of Florence in back 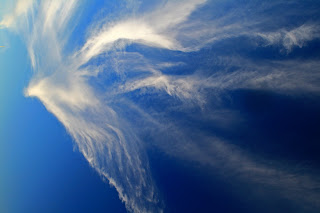 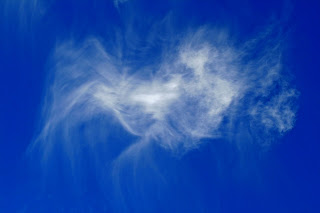 A Caliente cloud
Last Thursday we went to Coolidge to change the park model registration over to our name. Park models are classed as a vehicle in Arizona which requires the motor vehicle branch business even though the only time it had wheels was when it was delivered. Pick a number and wait for an hour as the office is always busy.
We have been to Coolidge and Johnson Ranch with the Jordan’s but haven’t found much more for the park model. There are some large garage sales coming up here so maybe we’ll have some luck there. We don’t need anything urgently now so can shop more leisurely.
We and the Jordan’s went to the Canada supper on Saturday night. Good meal and friendship but the sound system was atrocious. Monday night, we four went to see five sisters originally from Saskatchewan perform. They are scattered all over now in Alberta, Saskatchewan and Nebraska. The sound system degraded the show but the sisters’ singing was incredible. Beautiful harmony. It was amazing how five people could be so in sync with their timing. They did a couple numbers without music and that was a treat. They performed both gospel and 50’s pop.
Today we were entertained with the antics of moving in a park model underneath a cover where an RV had been. We happened to be visiting friends right opposite so had a ringside seat. The driver sure earned his pay. They had to remove two centre support posts and at one time had four guys on the roof of the park model holding up the cover roof and walking backwards as the truck backed in. I think it took the truck driver’s whole bag of tricks to get it in place.
Aileen is enjoying having room to have friends in for meals. The Jordan’s are coming for supper tonight for the second time and she’d like to have others over before we depart. Aileen bought a new crock pot a few days ago and used that for the first invitation and the roast and veggies were delicious. Tonight I get to BBQ steak down the street at the community BBQ.

Posted by John and Aileen on the road at 3:10 PM