Winding down in Florence 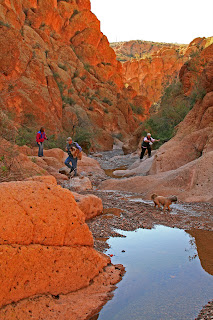 Scrambling because the creek is running in the side canyon 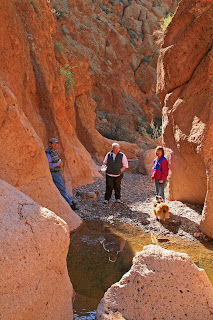 End of the road for most 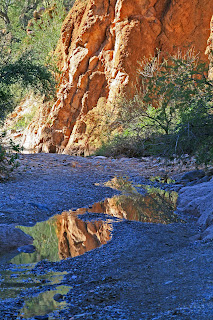 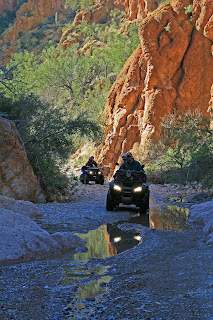 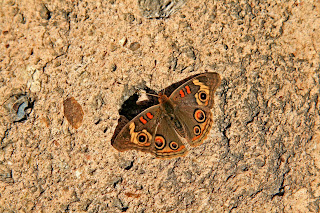 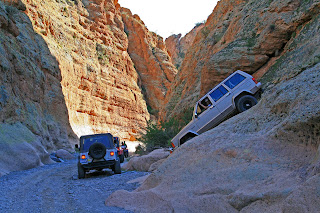 An old guy showing off! He's having fun though
We’ve been getting into travel mode slowly. There is much more to consider before leaving now that we are Arizona land barons! Aileen has been questioning the neighbours about the best way to summer-ize the park model. Several have given her their lists which she has condensed into one. She has also arranged with a younger neighbour to come in and clean a few days before we return in the Fall. We went to a few yard sales and found some sheets to cover the furniture with. There was a huge yard sale today here in Caliente in conjunction with Spring Fling which is major fundraiser for the park. Piles of stuff, some of it was pretty good and also low priced. The crowd was very large at opening and Aileen watched two guys almost come to fisticuffs over a three wheel bike she thought she might be interested in. She spent $1.50 and I spent nothing. We and the Jordans went to the big breakfast at the clubhouse after. The food was good and the company also. We had several couples from Washington at our table.
The Jordans are settled on their new lot and are tidying up the landscaping and cleaning out the shed. They have the Caouettes and another couple coming Sunday. One couple is renting a lot in Tierra and the other here in Caliente. Jim was over this morning going over the solar system on our travel trailer trying to see if he could spot anything out of place or broken which could be causing our charging problems. Unfortunately nothing jumped out other than a dirty ground connection which he cleaned up. We have played Mexican Train two of the last four nights. Randy and Wendy have been touring around the area enjoying themselves. One day, we took the Jordans and drove to Box Canyon. We parked the truck at the bottom of the canyon and walked for awhile. We went up the little side canyon first and the light was fairly forgiving for photos in places. I did some experimenting with different white balance for different effects. When we went up the main canyon we met quite a few vehicles including jeeps, quads and one motorcycle plus several other pedestrians. The light was higher than last time we were there so it gave us a different perspective. Even though it was breezy at times, it was warmer than we expected. Yesterday we were sitting in Tag’s Restaurant in Coolidge waiting for our lunch when Wendy and Randy strolled in so we ate together.
We have set our departure date as Friday the 20th so we have lots to do before then. Aileen had to visit the local dentist on Wednesday because of a broken tooth. He has patched it up and hopefully it will last until we return to BC. We need to get Aileen in for a haircut next week also. She cuts my hair and does it very well but we’ve haven’t gotten up the courage for me to try cutting hers. Maybe some time when we will be away from civilization for a few weeks.