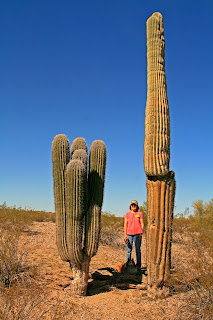 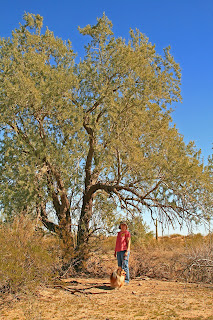 Jacquie and Taffy under a Mesquite tree 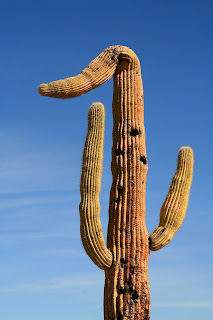 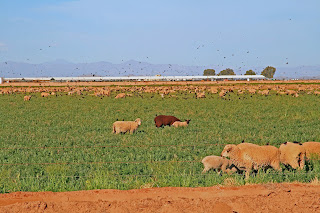 Lots of sheep raised around Coolidge 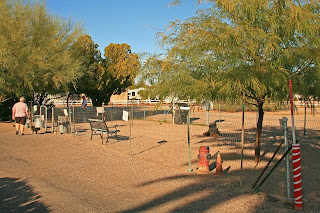 The dog park where Mitzy visits several times a day 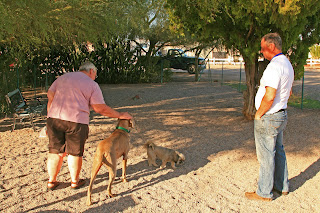 Thomas, the weimeramer and Wayne from White Rock with Aileen and Mitzy 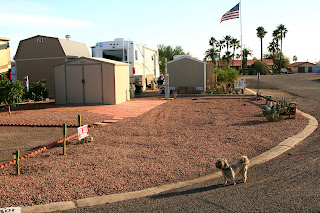 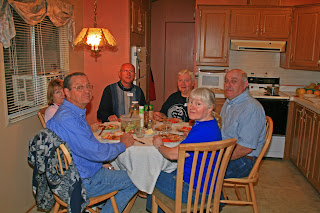 From left - Jacquie, Jim, John, Aileen, Wendy, Randy
We’ve been slowing down a little. Aileen has had a bit of a bug for a while and the weather has not been conducive to exploring part of the time. We’ve had 1.4 inches of rain the past two days which is supposedly 20% of the yearly precip. We’ve been getting some strong winds too. We have been to Casa Grande and Johnson Ranch shopping with the Jordans. We’re still looking for a few things for the park model plus old sheets for covering the furniture for the summer. Apparently it is impossible to keep the dust out over the summer.
The Jordans have purchased a lot next door at Tierra Del Sol and are now in the same mode we were in a few weeks ago with money and legal issues. The lots over in Tierra are twice as large as here so more options are available in developing the property. The lot is immediately adjoining Caliente so handy to our activities and much closer to the dog walk than we are.
On Sunday, Aileen and I went to Phoenix to pick Wendy and Randy up at the Sky Harbour Airport. We ran into sleet and hail near Apache Junction and the temperature dropped to 8C. We drove Apache Trail all the way through Mesa, Scottsdale, Tempe etc. There’s a lot of town spread out for many miles. We found a Chinese smorg (buffet) near the airport which had very good chow. Got to the airport in daylight so had a long wait but we’d taken a book for me and Aileen’s sudoko. The plane was pretty much right on time at 7:48 PM. We were home shortly after nine.
This afternoon is the AGM at the park so we have to go and listen and hope it’s not too boring (or contentious) and hope it doesn’t drag on too long. We had the McKinnons and Jordans over for supper last night and then played Mexican Train after. Jim was the leader by a large margin while I was the biggest loser with four times plus four points more. I don’t understand how I can lose so badly so often when I’m the scorekeeper!