Caliente Wildlife and ON THE ROAD AGAIN! 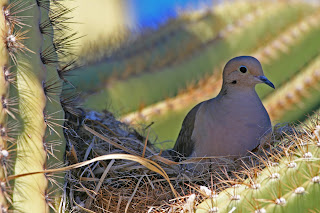 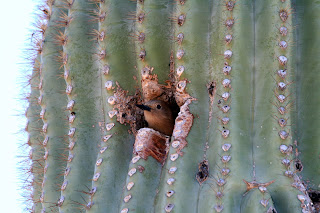 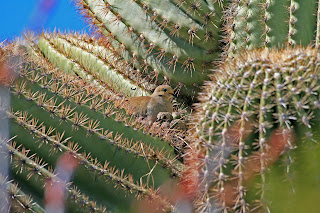 Spotted Dove and young in Saguaro 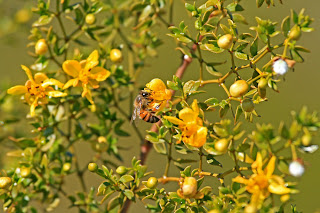 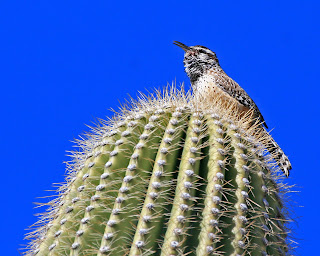 Male Cactus Wren doing his guy thing
The above five pics were all Caliente wildlife! 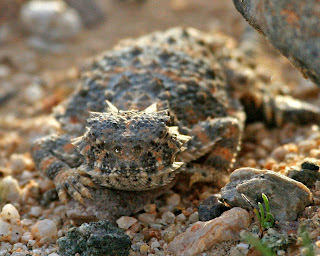 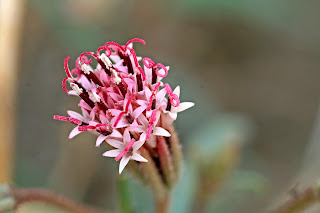 Un named as yet 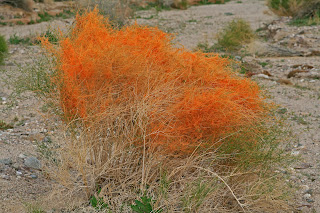 The orange appears to be a parasitic growth - it felt soft, rubbery and moist 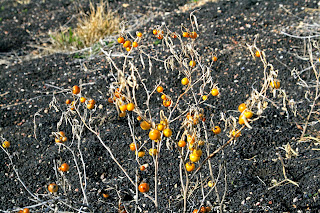 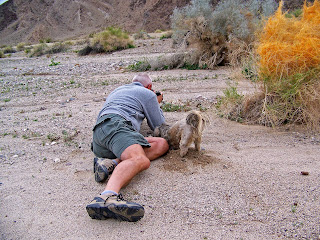 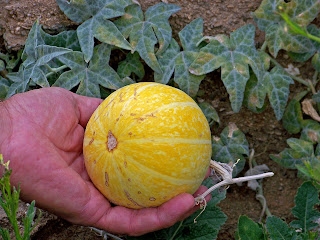 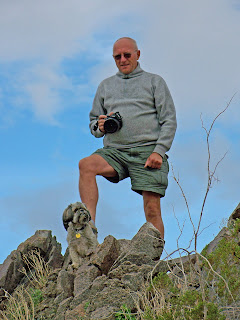 John and Mitzy - shot by Aileen
February 19, 2009
We’re winding things down here in Caliente. We moved back into the travel trailer Wednesday and today will finish summarizing the park model. Jim, the previous owner helped us through the process this morning. On Tuesday night we played Mexican Train with the Jordan’s, Caouette’s and their friends from Sorrento, Dennis and Pat. Pat was the big loser at over 500. Last night Aileen and I played with the Jordan’s and I set a new record. On one hand, I picked up 14 tiles before I got to play and had 257 points against me when that hand ended. I had 609 points at game end. Yeah right, the score keeper wins!
We, the Jordan’s and McKinnon’s went to L&B Mexican Restaurant in Florence for supper Wednesday night and the food was excellent. We saw several of our neighbours eating there also.
Monday night and Tuesday were quite rainy but Wednesday was beautifully sunny and warm. Thursday morning was frosty. Aileen and I walked over to Jordan’s and then we four went yard saling next door in Florence Gardens. I bought a beer mug and Jacquie got a magazine rack. Big spenders!
Thursday night, the six of us went to the Missouri Opry at Florence Gardens clubhouse ice cream social and it was an excellent evening. We saw some pretty incredible music by the leader on guitar, banjo, fiddle and drums. He, his daughter and a second man were all good soloists while his wife sang harmony. Ice cream was served after the performance. I would think over 200 attended which was pretty good considering Caliente also had something on in their clubhouse. Aileen and I went to the pool afterward for our last swim this visit.
Friday morning, Feb 20th, saw us pick up Jacquie and Jim before 8 to go to a couple of near by yard sales. Jacquie bought a laundry cart for a dollar and that was it. Then it was home to finish packing, closing up and spraying for weeds. It was very tight getting the trailer out onto the road. I think I may have to move one of the support posts back a couple feet to make it easier. Either that or a shorter truck would make it simpler. 10:30 when we got on the road.
We stopped at Florence junction for coffee break as breakfast had run out. Good thing as it was a long while getting through greater Phoenix. It was over 100 kms from the time we hit the Highway 60 freeway until we were clear of stoplights northwest of Phoenix and 1:30 when we stopped for lunch 10 miles before Wickenburg. The route was well marked but there were so many stoplights to contend with plus a lot of traffic. Some sections are 6 lanes each direction plus merge lanes.
We are camped at Burro Creek BLM park. Pretty quiet but full except for a few tent sites. If we’d been much later there wouldn’t have been room for us. We drove 290 kms today and were 5 hours from Caliente to here. That would be just over four hours driving. We went for several walks. I gave one of our gallon water jugs to an old couple who had forgotten theirs and were tenting. They were very happy. We’re looking forward to an early night as we’ve been late to bed and early up for several days. No yard sale alarm tomorrow!
Feb 21
We spent 11 hours in bed last night. Best sleep in a long while. It was frosty this morning (Saturday). We were at 1900 feet elevation. On the road about 9 AM. Several stops including one emergency (make that PANIC!!!) when the cat did a smelly in her crate in the back seat at 60 mph. Just before Kingman the snow was not very far above us. Didn’t think too much of that. We had lunch west of Kingman at Haviland rest stop. We stopped early at a boondock spot we’ve stayed in twice before near Amboy, California. We managed 331 kms today. Aileen had a long rest with the ladies (Sophie and Mitzy) this afternoon. I took my camera and macro lens for a walk around looking for flowers. I did see 6 Desert Bighorn sheep (2 were babies) but only briefly as they were very nervous. There were very few flowers about. When I stopped here on my way home last year 6 days later than this, there were lots of flowers. Later I saw a Horned Toad, about 4 inches long including the tail. Awhile later Aileen found another which co-operated better for pictures. Aileen had a nice phone chat with her friend Bev in Victoria tonight.
Feb 22
Only ten hours in bed last night! We went for a walk first thing this morning to show Aileen some of my botanical finds of yesterday then were on the road about 8:45. Today has been cloudy all day with showers since Barstow. We had a long stop on a side road near Edwards Air Force Base for lunch. Gas was $2.659 at Ludlow, Ca. Yesterday it was $2.159 in Kingman, Az. We are spending tonight at the Orange Grove RV Park just east of Bakersfield, California. No heated pool or hot tub but high speed wi-fi. Aileen picked us a nice large orange which was really sweet and juicy. Still showers off and on and more forecast tomorrow. Guess its back to long pants again – groan. When we came through Tehechapi on the way here, up at 4,000 ft elevation, the snow was almost down to our level. I came through here 6 days later than this last year and it feels like a month earlier. There are hardly any flowers out yet and the hills are not nearly as green. I had heard that last year was a late Spring but obviously this year is later. We drove 338 kms today arriving here at 3:00 PM.