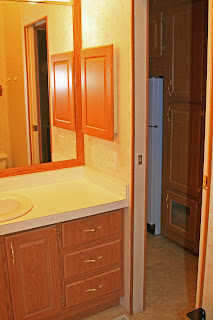 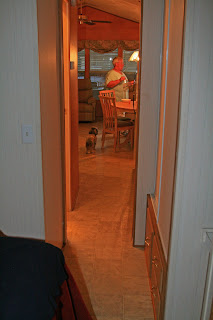 Ffrom the bedroom to the living room 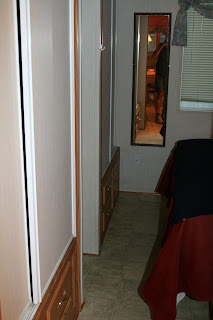 Colsets at the foot of the bed 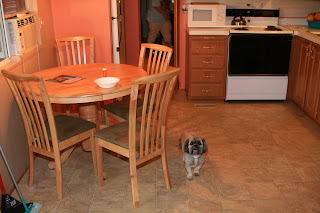 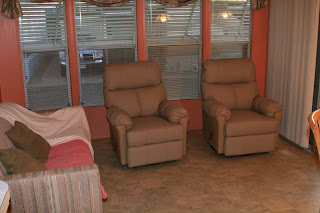 We pulled out of Quartzsite about 9:30 yesterday heading for Florence. We decided to take I-10 through Phoenix and then 60 east to Florence Junction and 79 south to Florence. The trip went very well. We spotted the truck route (I-10, 17 and 60) which we followed and it led us through the west side of Phoenix very smoothly. It was way nicer than places like Sacramento, Portland and Seattle on I-5 with their multitude of bridges and direction changes. We stopped for a long early lunch at a rest area where I took pictures of brittlebush and greasewood flowers then again at Florence Junction for a stretch and photos of some palm trees left over from some the scene of a long abandoned enterprise. We arrived in Caliente and had the trailer set up by 2:30. Fortunately, no neighbours were in evidence to witness or disturb backing into the very tight spot. It took several tries before we managed the deed. Several neighbours stopped later by to welcome us home. We really enjoyed getting back in the pool tonight and had four other couples to visit with there. First time we’ve had ten people in the pool at one time.
This morning was busy. I went and got our new name tags first thing then we went to the land title office to do some business. Next was the insurance office to get a policy in place for Wednesday and the bank to pick up cheques for our new account. Aileen also got the mail box changed over at the Post Office and we picked up the application for water and sewer from city hall. After lunch we went to Coolidge for gas, groceries and a truck wash. Southern California and Arizona have a lot of mineral in the water and most water will leave white spots and streaks on the windows and paint. This car wash uses filtered water for the final rinse which gives a fine finish. I unloaded the pick up box and stored everything in our shed so we can haul home anything we find for the park model. The only furniture they left for us was a hide-a-bed in the living room so we will have to come up with a bed and table and chairs PDQ. I grilled pork chops on the BBQ at the end of the street and watched a reasonably nice sunset while cooking. We had heavy cloud part of the day so hopefully tomorrow will be nicer. There are four swimming pool complexes here and each has some grills, ours has four. Each also has shuffleboard and one has mini golf. We had lots of residents welcoming us home again today. Everyone is so friendly!
Jan 27
This morning we had planned on driving to Casa Grande to look for used furniture. Several of the neighbours said they’d been recently and the selection was not good. Then Bill across the street came over and told us about Grandpa’s Furniture in Apache Junction so we headed that direction. Along the way we saw a store selling lift beds so we stopped in. We bought one with a queen mattress and two night tables to be delivered tomorrow. Then up to Grandpa’s where we eventually bought two swivel, reclining rockers and a small table with four chairs. They will also be delivered tomorrow in between Mitzy’s hair appointment and our meeting at the title office to close the sale.
I walked around Tierra De Sol this morning and found several places the Caouette’s could rent. The lots in there are huge and can accommodate any size RV. I grilled a steak that we’d bought at Safeway for $2 a pound and it was surprisingly good. Aileen says we’ll get five meals out of the $9.71 steak. Aileen and Mitzy are glad to be back walking in familiar ground and meeting their respective two and four legged friends.
Jan 28
We took Mitzy for her haircut and when we returned the bed was already in place. Good thing I’d left the door unlocked. Neighbour Daryl was kind enough to come over and supervise as the delivery guy didn’t want to enter without someone on hand. Shortly after the chairs and dining set arrived. We immediately started moving stuff from the Arctic Fox to the park model. We had our lunch in the new digs then went to town to finish closing the sale. Just back from that and doing some paper work at the office when Jordans called that they had turned down at Florence Junction. They were by themselves as Caouettes decided against coming. We went and waited at the highway and they arrived in about 12 minutes. The park manager insisted on measuring their motorhome as we said it was 36 feet which is the maximum permitted by the city. After a long hunt for a tape the motorhome was declared legal. So then J’s were allowed to get their renters tags. The motorhome fits on the lot just fine. I cooked steaks again for supper.

Posted by John and Aileen on the road at 5:17 PM