Moved on to Quartzsite 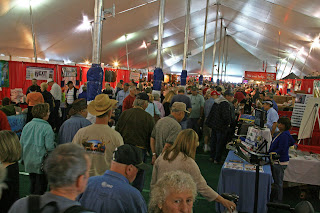 Day of the Quartzsite RV show - the whole place was this crowded! 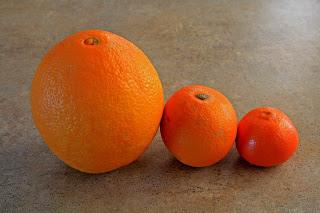 All three are oranges! The big one is over 4 inches.
Aileen said the girls enjoyed their night out and the Johnny Cash impersonator was pretty good even though he was ill with a cold. I puttered on the computer then went and enjoyed the pool and hot tub. At one point there were 9 of us in the water and all were from BC, Alberta, Saskatchewan and Manitoba.
We dumped the tanks and loaded up on water then hooked up and departed by 9:40. We arrived in Quartzsite, Lo Posa West camp area, shortly after 11 and were able to see Jordan’s and Caouette’s from the gate house. We are parked with them and will likely be here for the next 8 nights. Jim is hopeful we’ll be able to get internet here. He has talked to them a couple times and they’re working on getting things up and running here. I posted some pictures this morning in Yuma but it was quite chore. I guess the server wasn’t strong enough to handle the pictures as I ended up doing them one at a time and it took between 3 and 12 minutes per image! When you scroll down the pictures and come to the bottom of the page, click on older posts to see my last written post as each picture has become a new post thus using way more room.
Jan 17
I went to the RV show this morning for two hours. I did manage to get through everywhere but just barely. There wasn’t room for anymore people in the huge tent. I’ve no idea how many were in there but it would be several thousand. And it was just as crowded all around the outside at those exhibits. My only purchase was a campsite guide for Canada and the US which is 1,575 pages thick. Aileen stayed home as she isn’t foolish enough to venture into those size crowds. Mitzy was under the weather for some reason today and needed the company. She wouldn’t eat until later this afternoon and that was stimulated by some popcorn!
After lunch, we went for a drive through all four BLM camping areas. While there are a lot of RVs in spots, there is room for thousands more. We’re pretty lucky where we’re parked as there is new pavement near us but most of the outlying areas are suffering lots of dust. It’s a tradeoff, we have to sleep with ear plugs here or get covered in dust in most other spots. Jordan’s have internet now. They had to drive across town to find a strong enough signal to get signed up and now can log on to a different signal from the same provider. It seems that is what I’ll have to do, I guess. There was a hot air balloon being lit up for awhile tonight not far from us. I didn’t take any pictures as the foreground was too busy and I couldn’t get the whole balloon.
Jan 19
We’ve decided to stick with plan A and not bother buying internet. We’ll keep searching out free WiFi. Therefore the blog posting will continue to be sporadic. We’ve played Mexican Train all three nights. The first night we played the Chicken Foot variant and the regular game the last two. We went to a Mexican restaurant last night and the food was excellent. I brought almost half my taco salad home so that will be lunch today.
Happy Birthday to my brother Tom today! I will try to get this posted this morning. I have several pictures from the last post that I will attempt to get online first so you might want to scroll down below this posting to check them out.