A slow time for us 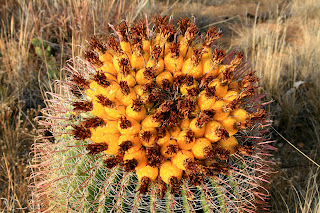 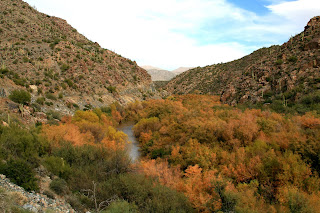 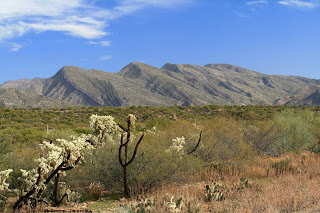 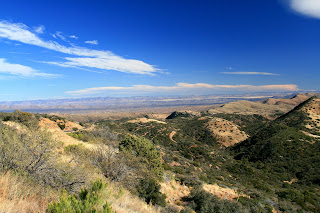 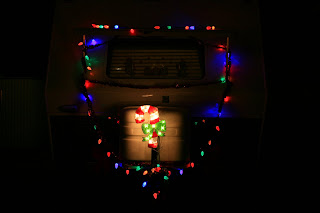 From the top:
Fish Hook Barrel Cactus fruit
The upper Gila River (actually has water)
An interesting incline mountain
View east at 5,000 feet south of Globe
Our trailer lights
December 12, 2008
We did a little decorating at the front of the trailer this morning. It looks okay tonight when it was dark enough to turn on. The sky was mostly overcast all day but did come through with a sunset tonight. Showers are still forecast for the next week but nothing like the BC forecast. I’ll take this and be quiet. We took several walks around the park today separately and together. Mitzy will sleep well tonight.

Dec 13
We went to the clubhouse for breakfast this morning. We had pre ordered our own menu selection several days ago and breakfast was very good. We were surprised to awake to clear skies this morning but aren’t complaining. We took advantage of the weather by taking a drive to Globe then south west to Winkelman and on down to Oracle Junction returning to Florence via #79. Shortly after leaving Globe we went over a 5,000 foot pass. It was only 12C and the wind was just howling – brisk! We managed to find a side road out of the wind to have our lunch later after we dropped back down in elevation. I had heard something about Aravaipa Canyon so we drove the 9 mostly gravel miles up to the ranger station. It turns out that the canyon is off limits unless one has a valid permit as it is a restricted quota wilderness area and has been since 1972. Because it is one of the only areas in the desert that has dependable year round water, it has a large collection of rare wildlife and plants.

Dec 14
Boy did it rain in the night! We woke up at 4am and the rain was pounding on the roof. Aileen was pretty tired this morning so she went back to bed after breakfast and I woke her at noon. We kept a low profile most of the day. Mitzy and I went for a couple of long walks around this park and through the next park.

Dec 15
We only had a light shower today but the temperature only made it to 46F. That’s much better than many places. Bev and Kev flew in to Calgary last night from Mexico where it was +28C. This morning they awoke to -45C with the windchill! Salmon Arm reported -21C and much of Vancouver Island has snow. That puts things a little more into perspective for us. However, I do wish the sun would shine!
Posted by John and Aileen on the road at 9:54 AM