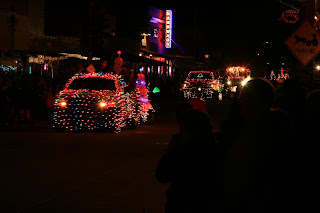 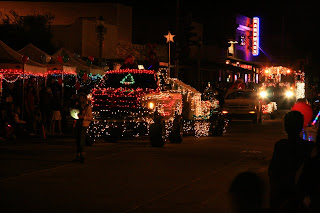 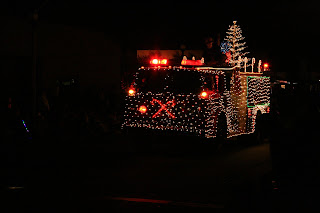 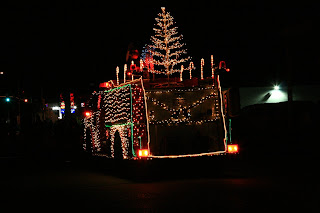 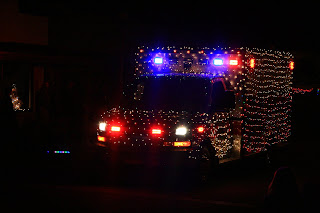 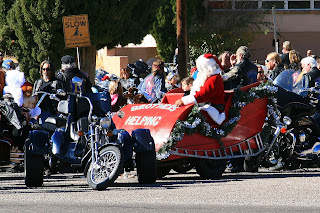 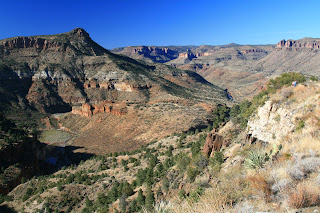 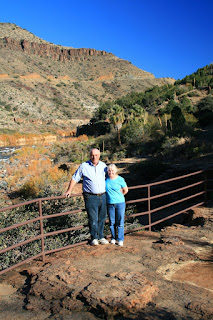 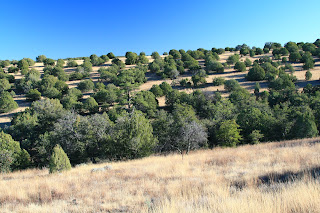 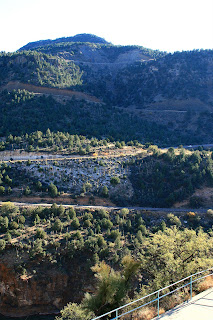 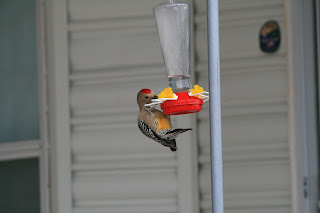 Gila Woodpecker across the street.
He thinks he's a hummer!
On Thursday last we went to the Potato Bar which was the name for this week’s Hog Heaven up at the clubhouse. Supper consisted of a baked potato with every imaginable topping, done buffet style. There was a fairly good crowd for the meal. Friday evening after supper we went with Wendy and Randy into Florence to see the light up parade. We were amazed how many young children showed up for the festivities; there were hundreds. We’re so used to being among the youngest in here. We rushed back from the parade to go to the dance in the clubhouse which wasn’t as well attended as I expected. Less than 100, I would guess. The park isn’t half full yet, I think, with people arriving daily. I understand many of the residents don’t show up until after Christmas. The band was called 3 Wheel Drive and they played great country music. There was a definite slant towards Marty Robbins which they explained later. They have been the house band for the annual Marty Robbins festival for the past 15 years and have been playing together for something like 55 years! Wendy and I just about wrecked ourselves early on when they played a polka. We were the only ones doing a real polka though several other couples joined us on the floor. My calf muscles are still tender three days later! It was a lot of fun even though we had to forego our swim that night. The dance went an hour past RV midnight. RV midnight is 9 PM, I read somewhere the other day.

On Saturday morning Aileen and Wendy walked to one of the adjoining parks to their huge Winter craft fair. Actually they only walked home as one of the neighbours gave them a ride almost right away. They came home empty handed but enjoyed the looking. At 10:30 after they’d returned we decided to take our lunch and go to the Salt River Canyon which is north and east of here. I’d read somewhere about it awhile back and found my note on it recently, describing it as a downsized Grand Canyon but well worth the visit. It was! We gained quite a bit of elevation and found the temperature much cooler at lunch even though the sun was bright. We were nearly 6,000 feet at the highest point on the road. Route 60 is the only east – west route for quite a distance in central Arizona so they had no alternative but to engineer a road through the canyon. They did a good job too as 6% was the steepest grade. We had to retrace our steps home as any circle trip would have added many hours to the day. We made it home just before dark as it was. Route 60 passes several huge still operating open pit copper mines near Miami and Globe, AZ. Aileen was impressed with how close to town some of the operations were. As we entered Miami just before noon, there were hundreds of Harley’s marshalling for a toy run. I would have enjoyed staying just to see Santa riding in a two wheeled cart pulled by a Harley trike but we knew our time was short if we were to get to the canyon.

Another night, not sure which one now, we packed our food down to the recreation complex and used one of the gas barbeques to cook some shrimp Aileen had marinated. Yummy! Wendy made a potato salad as her contribution so we had a delicious supper. We’ll have to do that again. We’ve been missing our BBQ as we cooked several times a week on ours at home and we’ve yet to find a small one for traveling.

Sunday was cloudy and cooler with a nasty wind at times then rain overnight. Is anyone feeling sorry for us poor people? Oh well, it wasn’t enough to make me resort to long pants so as long as that’s as far as it goes we’ll suffer through. The sky cleared in the late afternoon and there was a nice sunset which I tried to do something with but suffered from a lack of suitable foreground again. The sun seems to be coming back this morning but it is cooler.