Time slipping away in Florence 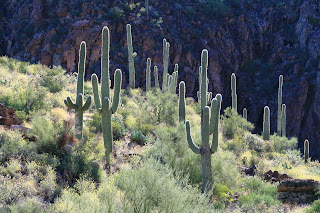 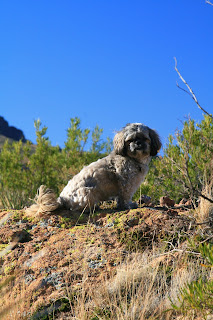 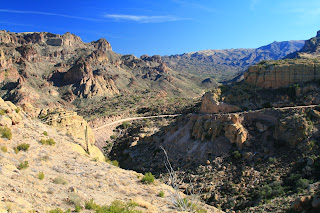 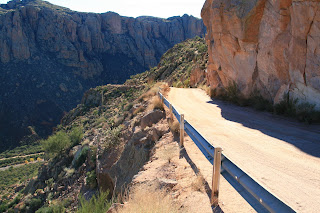 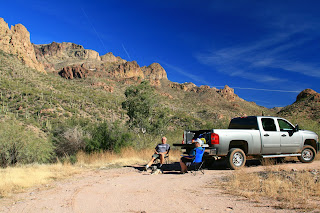 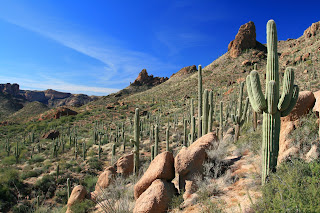 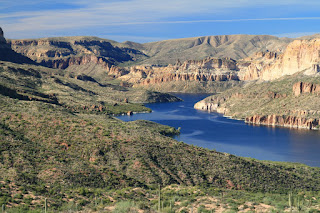 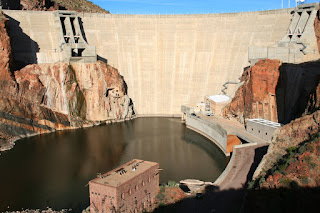 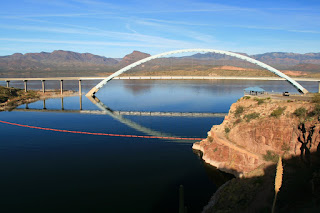 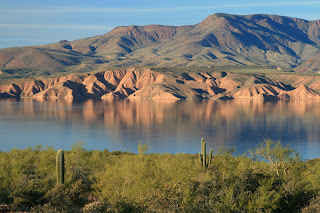 Roosevelt Lake.
Where do the days go? On Sunday we went to the music jam here in the park and danced to several of the songs. Sunday night was Mexican Train at Wendy & Randy’s; what a game. On Monday, we set the alarm and Aileen and I left here at 7:23 for a big loop trip. We went north to Apache Junction then took Route 88 east to the Roosevelt Dam. The first hour we made good time but the next 44 miles took us over 5 hours! We did stop and explore and take lots of pictures but the road was very rough necessitating slow driving with our hard riding truck. There was lots of washboard but the worst was all the erosion gouges across the road from the recent heavy rains. One of the highlights of the trip is the section known as Fish Creek hill which is mostly single lane and clings to the side of the mountain as it descends. Those not used to such roads find it a little uncomfortable (or terrifying) but it’s really safe enough if caution is exercised. The hill down to Bella Coola is a super highway by comparison! There were also some fine stands of Saguaro Cactus which necessitated a walk uphill to capture some images. Roosevelt Dam was built in 1911 as the world’s largest masonry arch dam and was constructed of locally cut stone. It was added onto in the 1990’s and made 70 feet higher. This dam is what made it possible for Phoenix to grow into the city it has become by providing a stable water supply. After leaving the dam we had to increase our pace to get home for supper arriving back in Florence after 5:30. It was all good paved road after the dam. Suffering from all the bumps, Aileen was in bed asleep by 6:30.
Monday was a rest day for us as was Tuesday for the most part. I went into Florence in the morning looking for a few things but was unsuccessful. I did spend quite awhile prowling around the True Value Hardware store which is a step back in time. They’re modern and up to date but also are like the old fashioned stores in that they carry most things required for farming and ranching that were common years ago. They are located in an old building which has its own uniqueness. On Tuesday afternoon I drove to Casa Grande to get the truck serviced and the tires rotated. No one around here had the machine to recalibrate the tire pressure monitoring system that I’m stuck with on the truck which meant I had to find a GM dealer.
We still pack our computers over to the club house most mornings to get online but was surprised to get a good enough signal here in the trailer this morning. That was a bonus. However, I found that the signal wasn’t strong enough to upload pictures to the blog so I will have to wander over there to get this posted. We played Mexican Train again last night at W&R’s then went to the pool afterward. We’re still enjoying having our own pool and hot tub! There are four pools scattered through the park.