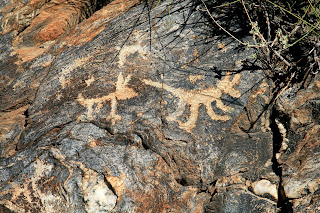 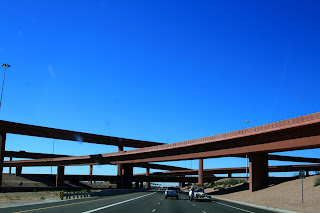 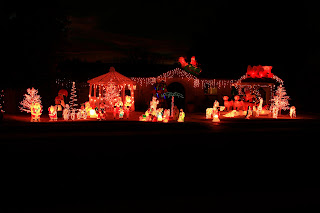 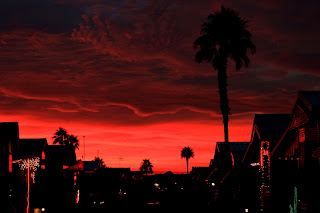 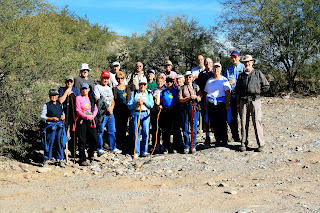 Pictures from the top:
Petroglyphs
Freeway overpass on the way into Phoenix
Florence yard lit up
The hiking group
Dec 8, 2008
We went to the Monday morning announcements up at the clubhouse which turned into a bit of a marathon; Aileen and Randy finally bailed out as they’d had enough. Later I took my laptop up to the clubhouse to get the blog online. Later still I took both laptops up and sent out our Annual Christmas letter to family and friends. I had to use Aileen’s laptop to look up the addresses as we left our email address book in storage. Then I found out I was still talking about Christmas in California when if fact we are staying here! Oh well.
At one point while I was out walking, I met Wendy near the mini golf so we had a bit of a game. We proved we aren’t golfers! I volunteered to cover our pool and hot tub up for this week and will probably do it until we leave. An old guy from Ontario has been doing it for the past week and was happy to relinquish the chore.
I was helping do dishes tonight when Randy came knocking to tell us about the sunset. The sky all around was coloured; a 360 degree sunset! After I took some shots of that from in front of the trailer, we four went into Florence to check out some lights an old guy was bragging about to me at the light parade the other night. It turns out he actually did have bragging rights. His yard was pretty full and bright.

Dec 9
Aileen played her first mini golf this morning with Wendy. She and I played a game after lunch and she got a hole in one on the second hole! Aileen said it was only 40F this morning when she went to the showers. There was a nasty wind all morning also. It was nice by 1 PM for awhile then the wind picked up again. Yuma and area had severe wind warnings this morning and north of there had dust storm warnings. There were also warnings for the east-west freeways warning of difficulty driving with high vehicles as the wind would tend to make straight driving difficult.

Dec 10
Beautiful clear skies all day but there was a tang in the air even at the warmest. I had to use my wind pants over my shorts this morning and evening when walking Mitzy. Aileen and Wendy went to the clubhouse this morning for a ladies clothing and watch sale. Prices were up to 50% off but they both returned empty handed. I think they enjoyed the looking though.
After lunch, Aileen and I drove Wendy and Randy into their hotel in Scottsdale. They get a free shuttle from there to the airport in the morning and will stay with Randy’s daughter in Vancouver tomorrow night. She’ll put them on the ferry Friday and then its back to work for Wendy until she can get more holidays in February. Aileen and I found some mincemeat in the second large store we tried. The other day Safeway in Coolidge had never heard of mincemeat they said and the WalMart Supercentre didn’t get any this year. We did more shopping later and Aileen also bought the ingredients to make mincemeat from scratch. I bought a bag of oranges off a truck here Monday so the peel will be the start for her. Most grocery items here are the same price as BC then there’s the huge hit with our dollar so they are close to 30% more expensive. Milk and eggs are a bit cheaper. However, we are saving big time on gas. I paid $1.559 US$ (US gallon) for regular today which would equate to about 54 cents Cdn$ per litre.
We were so late shopping that we had supper at a Wendy’s restaurant arriving home about 6:30. Aileen had an email from her friend Edna that she and Ray are coming to Yuma soon. Since we plan to go to Quatzsite via Yuma, we will try to get together. We went to the pool later tonight and had it all to ourselves as we expected. It was pretty quiet with just us. I guess all the locals who weren’t at Bingo or cards were glued to their TVs. Aileen helped me cover the pool when we finished. Our landlord has returned home so I’ll have to see him about staying longer and giving him more money. They had to fly home to Washington suddenly as his 94 year old mother in law had broken her wrist and needed to be moved to more care. They were gone 2 ½ weeks.

Dec 11
Mitzy had a thrill this morning on the way to the dog park before daylight. Aileen reports there was a dove sitting on the road trying to suck heat out of the pavement and it let Mitzy come up and nudge it. There were other doves along the road as well. We got up earlier than normal as I was going out with the hiking club. 11 guys and 9 ladies hiking today and we filled four vehicles. We drove north up #79 about 20 kms then turned east for another 7 on the dirt road. We parked at a ranch gate then walked as the route was up a wash (dry creek bed) and washed out road. We circled back down the wash and saw quite a large number of petroglyphs along there. Some were fairly distinct but others were pretty far gone. We left at 8 am and were home well before 11 am; that’s not a usual hike for me. It’s more likely to be 11 pm! Tonight we’re going to the clubhouse for supper to try chicken fried steak. I had it once before when we were stopped at a truck stop with Jordans last January. I had purchased tickets to the Christmas meal at the clubhouse but Aileen has now had an invitation to join some of the neighbours for supper instead, so I will have to return the tickets. The Dalgleish’s from Lac Le Jeune, near Kamloops are hosting.
Posted by John and Aileen on the road at 1:30 PM