Christmas has come and gone 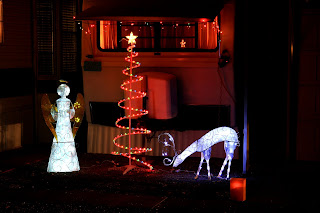 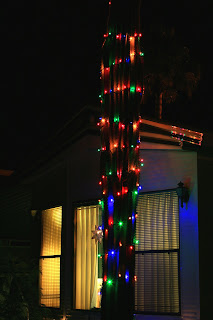 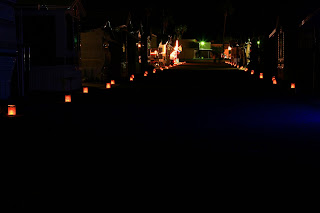 Paper bag luminaries which lined all the streets in the park
We’ve kept a pretty low profile the past few days. The truck hasn’t left the park since the 22nd. We do take lots of walks around the park. Three days ago I got the printer out from under the bed and made some prints. Then the next couple of days I made cards. We gave some to several neighbours as they kept bringing us gifts – mostly edible. I’m almost out of the card stock I bought years ago so will have to come up with something else pretty soon.
Christmas Eve we joined quite a few neighbours and strolled around four of the blocks singing carols. Following that, all the carolers from all the blocks met at the clubhouse for cookies, hot chocolate and mulled cider. We were going to stay for the church service later but it was too warm in there for Aileen so we went to the pool instead. And that of course, was pleasant. Christmas night it was way warmer (54F) but wind gusts of about 35 mph made it more exciting, especially when one of the lawn chairs came sliding across the deck and into the pool. Fortunately it was at the opposite end from us. It was neat watching the palm trees rocking and rolling. It’s amazing how much noise the palm fronds make when the wind blows.
We joined 5 other couples at the Dalgleish’s for turkey potluck supper on Christmas night. They’re a great couple from Kamloops who we didn’t know until we came here. We had two hours of happy hour then a huge feast. What a hoot! Everybody seemed to have a great time. I have sore cheeks from laughing so hard and long. Kathy, the hostess, was the youngest at 58 and Gordon down in the 200 block of our street was 80. The rest were spread out in between. So now we have an invitation to another potluck with this group plus nine or ten couples (about 30 people) in the small meeting room at the front office on New Years Day. We have tickets to the New Years Eve bash at the clubhouse also. Then on January 4th we go to Joanie’s 70th birthday party in the annex. We’ll have to stagger out of here and over to Quartzsite for a rest!